1 Corinthians 1.18-31 (CEB)
The message of the cross is foolishness to those who are being destroyed. But it is the power of God for those of us who are being saved. It is written in scripture: I will destroy the wisdom of the wise, and I will reject the intelligence of the intelligent. Where are the wise? Where are the legal experts? Where are today’s debaters? Hasn’t God made the wisdom of the world foolish? In God’s wisdom, he determined that the world wouldn’t come to know him through its wisdom. Instead, God was pleased to save those who believe through the foolishness of preaching. Jews ask for signs, and Greeks look for wisdom, but we preach Christ crucified, which is a scandal to Jews and foolishness to Gentiles. But to those who are called—both Jews and Greeks—Christ is God’s power and God’s wisdom. This is because the foolishness of God is wiser than human wisdom, and the weakness of God is stronger than human strength.
Look at your situation when you were called, brothers and sisters! By ordinary human standards not many were wise, not many were powerful, not many were from the upper class. But God chose what the world considers foolish to shame the wise. God chose what the world considers weak to shame the strong. And God chose what the world considers low-class and low-life—what is considered to be nothing—to reduce what is considered to be something to nothing. So no human being can brag in God’s presence. It is because of God that you are in Christ Jesus. He became wisdom from God for us. This means that he made us righteous and holy, and he delivered us. This is consistent with what was written: The one who brags should brag in the Lord!

Mark 16.1-8 (CEB)
When the Sabbath was over, Mary Magdalene, Mary the mother of James, and Salome bought spices so that they could go and anoint Jesus’ dead body. Very early on the first day of the week, just after sunrise, they came to the tomb. They were saying to each other, “Who’s going to roll the stone away from the entrance for us?” When they looked up, they saw that the stone had been rolled away. (And it was a very large stone!) Going into the tomb, they saw a young man in a white robe seated on the right side; and they were startled. But he said to them, “Don’t be alarmed! You are looking for Jesus of Nazareth, who was crucified. He has been raised. He isn’t here. Look, here’s the place where they laid him. Go, tell his disciples, especially Peter, that he is going ahead of you into Galilee. You will see him there, just as he told you.” Overcome with terror and dread, they fled from the tomb. They said nothing to anyone, because they were afraid.

This week I noticed something I’d not really seen before in this gospel reading. The very first verse says “When the Sabbath was over, Mary, Mary, and Salome bought spices...” For some reason, in my mind, I had always read it as “brought” spices—as in they gathered them up from their own kitchens or stash of burial supplies, and got together and took them to the tomb. But of course they couldn’t do that, because they were in Jerusalem, not at home, and so they had to go and buy them...when the Sabbath was over, since there would be no commerce taking place during the Sabbath.

I now picture them looking for the first star after sundown, the mark that one day was ended and another begun, and as soon as it was dark enough to count, rushing out to the market stalls just as they were opening, carefully picking out what they would need from unfamiliar merchants still setting out their wares.

Once they had the supplies, though, they didn’t go straight to the tomb. It would, after all, be nighttime. And so, even now they were prepared for what they had to do, they still had to spend another night waiting, weeping, and wishing things were different. They had a whole night to re-live every moment, wondering where it all went wrong, to doze fitfully in between discussing their plans for the morning.

Early in the morning, they picked up their freshly-bought spices, and took their grief to the tomb. Only one detail remained: who would roll away the stone? These were strong, independent women—I know the type. We bristle a bit when people imply we aren’t muscular enough to move chairs and tables or to lift boxes and open doors. And yet, arms full of jars and sachets, eyes full of tears, they felt they would be too weak to open the tomb. Maybe too weak in muscle strength, or maybe too weak in spirit or stomach. They needed help, and they didn’t know where to ask for it.

And then they looked up.

It must have been quite a shock, to find the tomb already open. But that pales in comparison to what happened next. They entered the tomb and saw a messenger who uttered the most famous biblical advice no one ever heeds: do not be afraid! And then proceeded to tell them the impossible: “he is not here, he has been raised.”

He has been raised.

I imagine that once again, they looked up...only to see the roof of the tomb, a reminder that this could not be, that death encircles and engulfs and there’s nothing more to see.

Then the messenger told them what may turn out to be the most difficult news of all: Go and tell the others, he is going ahead of you to Galilee, you will see him there, just as he told you.

And Mark reports that the three women were overcome with terror and dread, and they fled from the tomb, and said nothing to anyone, because they were afraid.

And that’s it. That’s the end. Overcome with terror and dread, they ran away and kept the story to themselves. We don’t even know what happened to those spices they so carefully prepared just a few hours before.

What is it about this moment that was so terrifying? Why would they be overcome with dread? Why wouldn’t they tell anyone what had happened?

Obviously, at some point, they did tell someone, or else we would not be here today. But first there was fear, doubt, questioning.

The words from the messenger that seem to have been the last straw were these: “he is going ahead of you to Galilee, you will see him there, just as he told you.”

Go home, the messenger says. Go back to the place you know best. Go back to your neighbours, your family, your familiar streets and schools and workplaces. Go to your own everyday life...you will see him there, just as he told you.

That is where resurrection happens, and where it matters most: in the everyday. Not just the one day with the special brunch and the pretty dresses, not just in the sanctuary, but in the everyday.

This message should probably scare us too, if we’re being honest. If this thing Jesus said is true—he has been raised, he is not dead, but alive; the tomb cannot contain the grace and love and promise of God—if this is true, then all those other things he said are probably also true. And if we will see him back in our everyday lives, that means that his teachings apply to those everyday lives as well. All that talk about acceptance, love, justice, and peace...all that refusal to allow anyone to be an outcast...all that insistence on caring for each other, without regard to our own social status or savings account or religious rules...all those examples of feeding people, healing people, challenging the status quo, refusing violence, pushing the leaders to do the right thing, and loving our enemies...all the promises about never being alone, about there being enough for everyone, about being given the words we are to speak, about love being more powerful than fear or hate, about seeing the image of God in every face, and knowing Jesus’ presence best when we are serving the poor...

All of that. Back home, in everyday life. He is going ahead of us, and we will see him there, because he has been raised, and the world will never be the same.

Of course, the world looks the same. It still seems an awful lot like a Good-Friday-world, with violence and fear and misuse of power making most of the headlines. Our everyday experience, as individuals or as a church or as a nation or a global community, doesn’t seem to line up with resurrection. God’s wisdom and power seem an awful lot like foolish weakness to us. Even we who sing Alleluia will with our next breath use words like “impractical” and “naive” when the preacher tries to suggest we actually live this life of faith in tangible ways.

But it is true: resurrection changes things. At the very least, it changes the way we see. Remember the women going to the tomb: And then they looked up!

Resurrection is a lens for everything—from how we read scripture to how we think about politics to how we spend our money to how we talk to our neighbours to how we treat the earth to how we pray. As Frederick Buechner said, “resurrection means that the worst thing is never the last thing.” Instead it means that God always has the last word, no matter how brutally we crucified him, and no matter how carefully we sealed the tomb. And this is what God says: “behold, I am doing a new thing, even now it springs forth, do you not perceive it?” 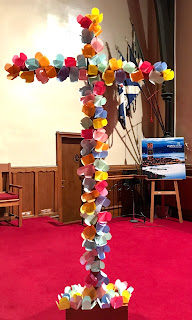 The poet David Whyte wrote the perfect poem for this resurrection reality:

CLEAVE
To hold together and to split apart
at one and the same time,
like the shock of being born,
breathing in this world
while lamenting for the one we’ve left.*

This is what Easter does: it holds together and splits apart, and we are left breathing in a brand new world, even as we lament the one we’ve left, the one we thought we understood, the one where we were comfortable even though we could not grow and thrive in it. Easter morning is when we are delivered from darkness to light, from a story that ends in pain to a story that never ends, from a world that trusts in its own wisdom and power to a world grounded in God’s wisdom and power, however foolish and weak it may seem.

And we, like the women that first Easter morning, are right to be afraid...and also to get on with it anyway, to follow the messenger’s instructions, to heed Christ’s call: to go back to our ordinary lives and live this new truth, this new resurrection reality, because we will see him there. Our changed lives will be how people know the story, even when we don’t have words to tell it, though we—like they—will hopefully tell it anyway, even if our voices tremble, because this is the best news: He has been raised.

* 1st stanza of CLEAVE from the upcoming book THE BELL AND THE BLACKBIRD
TO BE PUBLISHED APRIL 2OTH 2018 © DAVID WHYTE AND MANY RIVER PRESS 2018
Posted by Teri at 1:46 PM