Hope....even in the Church of Scotland 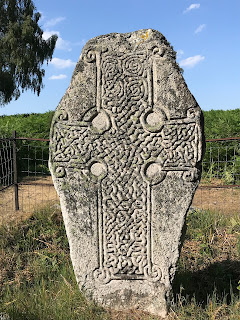 The Church of Scotland, like many denominations, is facing a crisis. It’s a crisis largely of its own making, as many church crises are. (A good many congregations are in crisis, for example, because they have never learned healthy communication skills, or because they have never faced up to realities in their history that are still affecting them though most people don’t even know what happened....and a good many more because they won’t stand up to a bully....etc.)

The CofS enjoyed the same cultural dominance that many mainline Protestant denominations did in white western countries in the 20th century....and like many European state churches did from the 16th century onwards. And, like all those mainline Protestant churches, there is a long history of complacency about the church’s place in the society, and that easily leads to taking people for granted, and worse, taking the faith for granted. We have gotten ourselves into this situation by assuming that people would soak up our version of Christianity, and that plus the cultural supports would be enough to keep people engaged and therefore keep the institution going.

It turns out both of those assumptions are false.

And now we are scared. Scared of the falling numbers of ministers (and members), scared of secularisation that (supposedly) steals young people away for other activities, scared of losing our beloved buildings, scared of death.

I understand the anxiety. I do.

I am concerned as well. But I think I might be concerned about slightly different things than I hear people talking about at the moment.

I am concerned that we don’t seem to have a sense of the Holy Spirit moving in and through us to do something to make the world look more like the kingdom of God. We don’t seem to see her, we just see crumbling buildings and greying heads...

I am concerned that we seem to have decided that the Church’s best days are behind us, despite God’s promise of “plans for your welfare, not for your harm; for a future with hope.” (What is compelling about a faith that has nothing to say to our lives today, or tomorrow, or next year?)

I am concerned that our vision is of consistent decline, rather than a vision for how to participate in what God is doing in Scotland now. (Who wants to join in a vision of increasingly rapid decline?)

I am concerned that we are insisting on making structural changes when we aren’t clear about vision or mission. Structure needs to be created to serve the mission, not the other way around.

I am concerned that those of us asking for support in discerning God’s vision and then pursuing it are being labeled naively optimistic.

Newsflash: pessimism (which too often masquerades as “realism”) is far more dangerous than optimism, because pessimism has no hope. If we are indeed a Church without hope, then please, by all means, close the doors. Now. Today. Don’t wait. Because that is not a church.

Similarly, if our only hope is for a return to the 1950s Church, then again: close the doors.

Surely we believe in a God who is more than capable of building up the Body even now. Or do we believe that God was only living and active before iPhones and Sunday youth sports?

I don’t know about you, but I believe that God has a vision for the Church of Scotland. I believe God has a purpose for us to carry out in every parish. I believe God is capable of giving us everything we need to live that purpose in service of that vision.

The only thing I believe that may be naively optimistic (though I hope not!) is that I also believe we are capable of seeing the vision, and following it. It will be hard work, it will require changing some things we have held on to for longer than they have served us, it will mean allowing God’s new thing to supersede our fears and even our personal desires, but I believe it is possible.

Perfect love casts out fear.
Can we live like it? Here’s to hope!