The story is in the details — a sermon for Palm Sunday 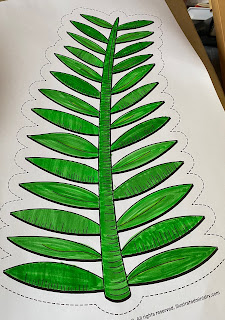 As they approached Jerusalem and came to Bethphage and Bethany at the Mount of Olives, Jesus sent two of his disciples, saying to them, ‘Go to the village ahead of you, and just as you enter it, you will find a colt tied there, which no one has ever ridden. Untie it and bring it here. If anyone asks you, “Why are you doing this?” say, “The Lord needs it and will send it back here shortly.”’
They went and found a colt outside in the street, tied at a doorway. As they untied it, some people standing there asked, ‘What are you doing, untying that colt?’ They answered as Jesus had told them to, and the people let them go. When they brought the colt to Jesus and threw their cloaks over it, he sat on it. Many people spread their cloaks on the road, while others spread branches they had cut in the fields. Those who went ahead and those who followed shouted,
‘Hosanna!’
‘Blessed is he who comes in the name of the Lord!’
‘Blessed is the coming kingdom of our father David!’
‘Hosanna in the highest heaven!’
Jesus entered Jerusalem and went into the temple courts. He looked around at everything, but since it was already late, he went out to Bethany with the Twelve.
~~~~~~~~~~~~

I have some friends who have said that in these days of “distancing” and “lockdown” and “isolation”, they notice more than ever when there are crowds of people in, for instance, television shows. It has already been so drilled into us to stay two metres apart, even after just a few weeks, that it’s startling to see crowds jostling each other on screen. It feels almost like a different world.

This story of Jesus entering Jerusalem feels a bit like that, as it’s full of things we can’t do right now....there are people moving about, going from town to town, and then lining the streets like a crowd at a parade, shaking out clothes and laying them down, handing out branches, shouting near each other without face masks....it’s startling how quickly something like this starts to feel unusual.

Of course, that day was unusual. Not because of the parade aspect — that may actually have been the most normal part of the day. At Passover there would be throngs of people coming to Jerusalem, making their pilgrimage to the holy city for the holy festival. And often those already in the city, whether residents or pilgrims who arrived earlier, would line the streets and welcome them. Normally they would do so by singing psalms, and the pilgrims would respond...and there are several psalms set aside for just this purpose, for going up to Jerusalem and for welcoming others in. Notice in our opening psalm today, Psalm 118, there is a line for those who are in the city already: “Blessed is the one who comes in the name of the Lord. We bless you from the house of the Lord.” And there is a response from those who are entering: “The Lord is God, and he has given us light.” The psalm even mentions the branches!

But the details of the day...they were unusual. Mark’s gospel is renowned for its details, things that you wouldn’t expect to hear, as when he notes that during the feeding of the 5,000, Jesus had people sit down on the green grass, or when Jesus was asleep on the boat during a storm, he had a pillow. So I want to just explore a few of the little details Mark gives us in this story, details that we might usually gloss over. Why do these little details matter? Mark is a good storyteller, and he is the most concise of the gospel writers. He never wastes a word in conveying the point he wants to get across, so he would not have included them if he didn’t think they were important for some reason. Each of these seemingly insignificant details must tell us something about Jesus, and about the drama that is unfolding in Jerusalem.

In the prophets of the Old Testament we read that God’s anointed one will come, not on a warhorse, but on a donkey, a humble everyday pack animal. In contrast to the Roman emperor and his officials, Jesus enters God’s city in God’s way, and anyone who knew of his teaching and healing and then saw this entry would understand the reference. But why a young donkey that had never been ridden? Even the most humble person shouldn’t need to subject themselves to an unbroken colt. Then again, in the prophets we hear God saying “behold, I am doing a new thing...”. Could there be some symbolism here, of a new thing entering the holy city? Completely new, and maybe a little awkward to watch..... Not just a new king, but a completely new way of living, of understanding the world, of knowing God.

This week, Jesus is in and out of Jerusalem every day. The whole week feels a bit like the city and the disciples and even Jesus holding their breath. We are at the threshold of something big, but it isn’t all the way out in the open just yet. Each moment of the week takes us in and out...big public moments in the Temple, private moments in back rooms, and in-between in dining rooms with friends. There’s a lot of coming and going, as if we need reminding that Jesus and the ways he is changing the world affect every arena, not just public life, not just private life, but all of life.

I confess that there is a part of me that wonders if that detail is actually answered in the next bit:

...was he late returning the donkey?
It does seem as if Mark is trying to tell us that the procession into the city took a very long time, not just the 45 minutes or so you would expect if you were making the journey in normal circumstances. Sadly, I think this might be one detail whose background we will never know for certain, but it is interesting to think about why it might have taken such a long time to go two miles! Perhaps it’s a reminder that we cannot control God’s timing.

It’s probably obvious why the order of the psalm response would be reversed. Of course it is the crowd that needs saving, and Jesus that can deliver. There would be no need for Jesus to be the pilgrim chanting those words, of course, when he embodies God’s salvation in himself.

I wonder, if we were to join the crowd, welcoming Jesus into the city, what would we be asking of him? When we call out “save us, we beseech you!” what are we asking for? Right now, of course many of us would ask for saving from pandemic viruses. But when we take all these details into account — the threshold at which we stand, the new thing that Jesus is doing, which is all-encompassing of every aspect of our private and public lives, the fact that God’s time is not always aligned with ours — what are we asking when we pray for The One Who Saves to rescue us?

The crowds that day were likely asking God “save us from Rome!”

Whatever you are praying for today, know this: Jesus is salvation. Not just his name, but his life, his presence, his Way, his Truth. And he turns everything around, from the order of the psalm response, to the order of the world. He is doing a new thing that no one else can accomplish, and it will involve all of us—heart, soul, mind, and strength—in his love.