Israel packed up everything he owned and traveled to Beer-sheba. There he offered sacrifices to his father Isaac’s God. God said to Israel in a vision at night, “Jacob! Jacob!” and he said, “I’m here.” He said, “I am El, your father’s God. Don’t be afraid to go down to Egypt because I will make a great nation of you there. I will go down to Egypt with you, and I promise to bring you out again. Joseph will close your eyes when you die.” Then Jacob left Beer-sheba. Israel’s sons put their father Jacob, their children, and their wives on the wagons Pharaoh had sent to carry him. They took their livestock and their possessions that they had acquired in the land of Canaan, and arrived in Egypt, Jacob and all of his children with him. His sons and grandsons, his daughters and his granddaughters—all of his descendants he brought with him to Egypt. … All of the persons going to Egypt with Jacob—his own children, excluding Jacob’s sons’ wives—totalled 66 persons. Joseph’s sons born to him in Egypt were 2 persons. Thus, all of the persons in Jacob’s household going to Egypt totalled 70. 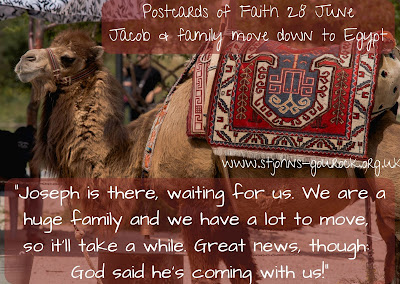 A lot has happened since last week’s reading about Abraham and Sarah pulling up stakes and moving through the land God was showing them. We’re two generations on now, and Jacob, Abraham’s grandson, is elderly himself. You might have noticed that the story goes back and forth between calling him Jacob and calling him Israel — because many years ago, when Jacob and his wives and children were traveling and were about to meet up with Esau, 20 years after Jacob had stolen Esau’s birthright and blessing, Jacob had a dream in which he wrestled all night long with a stranger…and the wrestling was so fierce and Jacob so insistent about not giving up that the stranger gave him a blessing and changed his name. Some think the stranger was God, others an angel, still others think it was Jacob wrestling himself and his inner demons…but whatever the case, it ended with Jacob being given the name Israel, which might mean “strives with God” or it might mean “God strives”. Either way, it is a name that recalls the way he refused to give up on his wrestling with God, even when the night was long and the going was tough, and that is the name that will be given to the whole community and nation of people who are descended from Jacob and his twelve sons: Israel.

Today we have come to the culmination of a saga that is by turns heartbreaking, infuriating, confusing, wonderful, and awe-inspiring. Jacob’s son Joseph was sold into slavery by his brothers, but had risen to be the most powerful man in Egypt besides the Pharaoh. He used his skills, and allowed God to work through him, so that while there was a famine everywhere, Egypt still had food. After several back-and-forth visits by his brothers, some intrigue, some weeping and some rejoicing, it was time for the brothers to bring their father down to Egypt, to re-settle in new land, and most importantly, to see his favourite son, whom he had thought was dead these past many years.

And so Israel pulled up the stakes, just as his forebears had done, and began to journey by stages away from his home in the land God showed his ancestors.

The first place that Israel stopped is the place where he and Esau had grown up, with their parents Isaac and Rebekah. It’s a place that Abraham had found water, and where both Abraham and Isaac had made treaties with the local king. Jacob was now the third generation in his family to worship in that same spot. Given that God had promised to show them the land, it made sense that they would stop to worship as they proceeded to leave the land — especially since in that time and culture, gods were thought to basically live in their territory. To leave the land God had given them might also mean to leave God behind, and they would be understandably worried about that!

But our God is different. God appeared to Jacob, just as he had appeared in that same place to speak to Abraham and Isaac, to say: I am going with you.

I am going with you.

The God who wouldn’t let go of Jacob all those years ago on the riverbank, who blessed him in the struggling…
the God who sat beside him through all these years of grieving the loss of his son…
this God is going with him on this next stage of the journey, even into a foreign land.

So when it feels like we are struggling — we don’t let go, because God doesn’t let go of us.
And when we are sitting in the valley of the shadow of death — we are not alone.
And when we are leaving behind everything familiar and heading into the unknown — God is going with us.

For all the times we have subconsciously assumed that God lives in our church buildings, or at least that God speaks loudest in a church building, now we know that God is going with us when we are outside of them, whether we are on the internet or walking through the neighbourhood or sitting in our windows looking out at the rain.

Though the world feels different, almost foreign, like we can’t quite find our footing…God is going with us. Our God is not contained in a particular place, or a particular way of doing things, or a particular understanding or language or profession. God is determined — often more determined than we are! — to come alongside us wherever we are, to guide us to walk together on God’s path, to ensure we are never alone, no matter where we find ourselves.

Once we hear the words that Jacob heard, “I am going with you,” the question becomes: what will we do now? How will we live, knowing that God is going with us into this unknown territory? What choices, behaviours, words, actions, and relationships will demonstrate that we are walking with God even outside the church building, even outside our comfort zones of the ways we’re used to?

A lot is shifting around us. We are being asked to consider the impact our words and choices have on people we have not thought much about before. Sometimes it might feel as if everything we do is wrong, or like it’s impossible to use any words at all. Sometimes it might feel as if the world we knew is slipping away, and we feel unsteady. That’s okay! Discomfort can lead to growth, and we can learn from mistakes, if we are willing to shift and re-negotiate and make space for different people, with their different experiences. Despite the fact that we have been the definers of reality and normality for centuries, there has always been more to the story. We are being given the gift of seeing other perspectives, and it might feel like leaving our homeland and heading for Egypt…but if it does, remember: God said, “do not be afraid, I am going with you.” How might we respond to these changes in the world, knowing that God is with us all?

Our personal journeys through this pandemic experience, our church journey into the unknown future God has planned, and our cultural journey away from white supremacy and toward justice and wholeness — any of these would be anxiety-producing on their own, and we are making all three at once! So today, let’s learn from Jacob, who wrestled with God until his blessing became apparent, even though it left him limping. When Israel began this leg of his journey, pulling up the stakes and moving forward, he first went back to his old stomping grounds, a place he knew he could meet God. But it was just a pause on the journey, because when he heard the message there, he pulled up stakes again and went onward, trusting God’s promise: I am going with you. He could not stay in that place, even though it was familiar and he reliably encountered God there. It was not the place he was called to be anymore. He had to move forward, not back.

We, too, can pause at our familiar places, and seek God’s voice. We, too, will hear again the promise: I am going with you. And we, too, can journey on by stages into this unknown land, trusting God’s promise to be with us, guiding us every step of the way. We may make mistakes, it may be uncomfortable, we may long for the familiar, we may struggle to understand and incorporate new ways of thinking and being that include more people….but we are not alone. Therefore, let us live as God’s people, with our choices, words, and relationships reflecting that grace.