Look to the Stars -- a sermon for on Genesis 15

Look to the Stars

When God called Abram and Sarai to leave their home in Ur and go to a new land, they went without question, believing God’s promise of descendants as numerous as grains of sand, trusting that God would use them to bless the whole world. When the camp grew too large for the land to sustain all the herds and people, Abram’s nephew Lot took his part of the family and animals, and went to settle in another area. During a war between Canaanite tribes, Lot was kidnapped by raiders. Abram took his men and went to battle the hostile tribe, rescuing Lot and all his family and their possessions. Abram then refused to take any of the spoils of war, returning home having received only a blessing from the high priest of the area where Lot lived. We pick up the story from there, in Genesis 15, verses 1-6 (New Revised Standard Version)

15:1 After these things the word of the Lord came to Abram in a vision, ‘Do not be afraid, Abram, I am your shield; your reward shall be very great.’ 2 But Abram said, ‘O Lord God, what will you give me, for I continue childless, and the heir of my house is Eliezer of Damascus?’ 3 And Abram said, ‘You have given me no offspring, and so a slave born in my house is to be my heir.’ 4 But the word of the Lord came to him, ‘This man shall not be your heir; no one but your very own issue shall be your heir.’ 5 He brought him outside and said, ‘Look towards heaven and count the stars, if you are able to count them.’ Then he said to him, ‘So shall your descendants be.’ 6 And he believed the Lord; and the Lord reckoned it to him as righteousness. 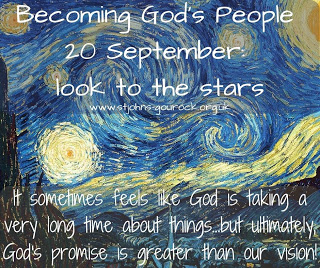 Many of you know that I have a tendency toward what I call “thinking about things.” Some of my friends might prefer the term “obsessing” and a mental health professional might use the term “ruminating” or “perseverating,” but I prefer “thinking about things” — and I do, I think about things a lot. Constantly. I like to go through everything in my mind, logically, and work out the different scenarios. If I do this, then this and this and this…..if we choose this other path, then this and this and this. I can spend hours, days even, thinking through all the possibilities and the different ramifications of each one.

Now, sometimes that leads to quite a bit of anxiety, because not enough of the options are good. I prefer win-win scenarios, where everyone has a good time and there’s peace and justice and goodness and maybe some adventure as the outcome. Sometimes that’s not possible and compromises have to be made. Other times there are no good options, no matter how hard I think, and that’s a pretty bleak spiral to find myself caught in.

That’s where Abraham is in today’s story — and God knows it. Though it isn’t clear that God had actually been reading Abraham’s mind, it is clear that God recognised that Abraham wasn’t feeling his best. God promised him blessing, and to make him a blessing to the whole world, but no matter which way Abraham turned over this problem in his mind, the facts were still the same: he had no children. So even though he had become a very wealthy man, and even though he had managed to settle down in the land and make peace with the neighbouring tribes and take care of Lot and his family, all those blessings kind of don’t matter since there would be no one to carry them on. All those blessings are temporary, and Abraham, now well into his 80s, was feeling his temporary-ness. If only he had an heir who could carry on his name and pick up the mantle of the promise to be a blessing to the world. But no…and so he concocted a legal workaround, making one of his enslaved servants his heir. That wasn’t exactly what he thought God had promised, but then again, that promise seemed like it wasn’t as durable as he’d hoped, so it was better to have a plan than no plan.

I know it might be hard to imagine being in such a situation, where things aren’t going the way we’d hoped, everything is taking way longer than we expected, and it’s impossible to plan for the future…but just try for a moment. You can see how easily Abraham might get mentally stuck in what I call a swirling vortex of despair, when it’s just him and Sarah, with no outlets, nowhere to go, and no future in sight. All Abraham needs is one son. That’s all. And it’s all he can think about, the one thing he wants, but seemingly can’t have. No matter how many other blessings there might be, the lack of that one thing overpowered everything else. And so God’s promise was frustratingly out of reach.

Into that anxiety comes God, starting off the conversation with “do not be afraid.” That’s quite an opening line, when speaking to an elderly gentleman who has been waiting years for God to fulfil a promise that was now physically impossible. So perhaps it isn’t surprising that Abraham’s response was quick and sharp: “what can you possibly give me that would matter? You haven’t given me the one thing that would make your promise true, so I’ve had to think up a backup plan on my own.”

I think we sometimes gloss over the way people speak to God in a lot of these stories. When we think about talking to God, we think about praying lovely words and asking nicely for things, saying thank you a lot in between each polite request. Even when we are desperate, in the middle of a global pandemic, begging God for healing and for relief from all this uncertainty and suffering, I think most of us at least try to ask nicely through our tears and loneliness. But Abraham here does not follow the acronym I was taught for prayers: ACTS—Adoration, Confession, Thanksgiving, Supplication. You’re supposed to first tell God how great God is, then admit to not being great yourself, then thank God for all sorts of things, and then you ask for stuff.

For some reason, people in the Bible rarely follow this rule.

Abraham jumped right in with “what are you going to give me to make up for the fact that you have not fulfilled the promise you made all those years ago? Because I’ve been trying to work it out but really this was your job and you failed at it. I just need one thing, and it’s the one thing that even you can’t give me anymore. It’s too late. Thanks for nothing.”

There’s a part of us, I think, that recoils a bit at the idea of talking to God like this. But this is part of what it means to be in a real relationship — full honesty. Part of becoming God’s people is learning to be 100% ourselves with God, because God already knows us. There is nowhere we can hide from God, and we don’t need to. Look what happened, when Abraham spoke to God with that tone: God took him by the hand and led him outside, and lifted his eyes out of the swirling vortex of despair and toward the stars.

God didn’t say “how dare you speak to me that way! Time to wash out your mouth with soap.” God said “come for a walk. Look at what I’ve made before. Look how beautiful this world is. Look at your part in it. The promise I’ve made you is even bigger than the stars you can count in the sky, and given that I made that, you can trust that I’ll make you into something bright and beautiful too.”

Remember, Abraham only wanted one thing: just one child.

And God showed him the stars. That’s how many descendants he would have.

What if our vision is too small, and God’s promise is even bigger than the things we are waiting for?

What if God’s promise is way better than simply “back to normal”?

Look to the stars.

Count them, if you are able.

And remember that the light you see today is already many years old. There are only around 100 stars within 20 light years — meaning that for nearly all the stars we see in the sky, it takes more than a generation for their light to reach our eyes! That light has been shining into space…and only now is it visible to us. God’s work is a long game, and we may not always be able to see it. But it is still there.

It says then that Abraham looked at the stars — lifted his eyes and his mind out of his swirling vortex of despair, stopped his obsessive thinking about one small aspect of blessing that he was missing, and looked at the stars…and he trusted God. He trusted the relationship that God had built with him, and that the promise was true, even if it didn’t seem true yet. The light was still traveling through space, but at some point, he would see it twinkling on the horizon.

As we continue this journey of becoming God’s people, may we grow in trust — the trust that enables honesty and that opens our hearts and minds to see God’s promise that is for far more than we can imagine.