A new call for a new time

The prophet Isaiah lived in the 8th century BCE, when the Assyrian empire was expanding, conquering the northern kingdom of Israel and destroying much of the southern kingdom of Judah. Isaiah lived in Jerusalem, the only city relatively unharmed in this war, and he spoke primarily to the kings, priests, and their wealthy advisors. Isaiah insisted that being God’s people involved not only worshipping the One God, but also behaving in ways consistent with God’s plans—and that God’s concern was primarily for those outside the halls of power, without wealth or connections. Much of the first section of Isaiah is about God’s vision of justice and righteousness, and how the leaders of the nation fall short of that vision, and therefore both oppress their people and lead them astray. In today’s reading from Isaiah chapter 6, the king has died and the nation is in turmoil. We hear about Isaiah’s vision of a visit to the throne room of God, where heavenly beings worship and where Isaiah receives the difficult grace of confession and call. I am reading from the New Revised Standard Version.

‘Holy, holy, holy is the Lord of hosts;

the whole earth is full of his glory.’

4The pivots on the thresholds shook at the voices of those who called, and the house filled with smoke. 5And I said: ‘Woe is me! I am lost, for I am a man of unclean lips, and I live among a people of unclean lips; yet my eyes have seen the King, the Lord of hosts!’

6 Then one of the seraphs flew to me, holding a live coal that had been taken from the altar with a pair of tongs. 7The seraph touched my mouth with it and said: ‘Now that this has touched your lips, your guilt has departed and your sin is blotted out.’ 8Then I heard the voice of the Lord saying, ‘Whom shall I send, and who will go for us?’ And I said, ‘Here am I; send me!’ 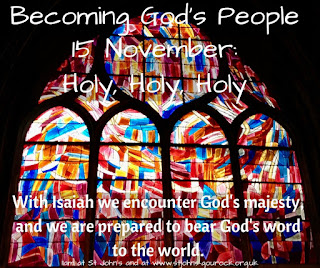 I love the prophet Isaiah. It’s my favourite book in the entire Bible, in part because of the beautiful language. Isaiah paints pictures with words. He’s the one who gives us the peaceable kingdom, where the wolf will dwell with the lamb, the calf and the lion, the little child shall lead them. He shows us God’s vision of the mountain where all people from every nation come and feast together and hear God’s word throughout the world, where swords will turn into plowshares and spears into pruning hooks. Isaiah writes about every valley lifted up and mountain brought low, about the desert springing into life, and about God’s justice breaking yokes of oppression. And even when he is writing about the consequences of the people’s sinfulness, he does so with such lovely poetic language!

Today we get one of his famously beautiful word-paintings about an encounter with God in the Temple. He saw, with his own eyes, a God so overwhelming that only the skirts of his robe filled the whole temple, and the heavenly worship literally rocked the house. In a flash, Isaiah realised he was in over his head — and he said so. He didn’t pretend that he was worthy, or that he understood, or that he was certain he was in the right place. He didn’t assume that he was seeing this vision because of his great faithfulness or as a sign of favour. Just as we offer a prayer of confession near the beginning of a worship service, the first thing Isaiah did on entering this heavenly worship experience was admit his failings. He knew that a face to face encounter between humans and God could be dangerous, because close proximity to such holiness burns — as it did for Moses, and as it did for the disciples on the Emmaus Road, and for many others throughout scripture and history.

I love that the response of the seraphim, the heavenly attendants who are flying about and singing, is to say “we can solve this problem.” God doesn’t kick Isaiah out, instead they reach out and make Isaiah ready. A burning coal to the lips sounds like a nightmare to me, but remember that fire cleanses but also heals. It can be used to purify…and it can be used to cauterise and close up a wound. Isaiah is strangely made whole, made clean, made ready to stand in God’s presence, and he lives to tell the tale.

This encounter with God was both an experience of overwhelming majesty — of smoke and singing and painful beauty — and also an intimate experience, being noticed, and touched, and spoken to. It’s that experience that was still tingling in Isaiah’s mind and heart when he heard God ask the heavenly court “who will go” and it’s that burning desire to serve this overwhelming God that caused Isaiah to speak up and say “here I am, send me” even though he had no idea what he was saying yes to. God didn’t say “I need someone to go to this place, do this thing, and say these words” — Isaiah answered a call based only on his relationship with God, not based on whether he thought he could do the task. He had already experienced God making him ready to stand in the holy presence, so surely God would also be able to equip him for the work ahead.

At this point, I think we need to know that Isaiah began his life as a prophet in the last year or so of King Uzziah’s 40 years on the throne. Even though things around the kingdom were changing and disintegrating and while other empires were rising and encroaching, this had been a long period of relative political stability with the same leader…but now it was over, and it wasn’t really clear who would succeed Uzziah or what sort of king they would be. The world must have felt upended and uncertain, as many periods of political transition feel. The people he would speak to were not following God’s ways, the society was unjust and people were suffering. A prophet’s job is to tell the king things he often doesn’t want to hear, so Isaiah must have wondered what sort of relationship he might have with the next ruler, and whether he would be more or less receptive to seeing things God’s way.

I love that we get this story of Isaiah’s encounter with God a few chapters in to his book. Usually call stories are right at the beginning, but the way this book is written, it feels as if the prophet was already following, already faithful, already working, and in the midst of that life and work came this moment of awe and wonder and confession and compassion and a renewed sense of purpose.

I wonder if we who are in the middle of our own faith journeys, who are experienced Christians and church-goers, still expect to encounter God when we come to worship, the way those who are new to the faith do? And if we did, would we be focused on explaining the ways we think we’ve gotten it right, or on admitting we need God’s help to make us holy, or just soaking up the beauty and wonder? Are we open to a mid-life correction, to a new call from God that might take us in a different direction than we’d been going before…and that might burn a little bit? And would we answer that call before we even knew for sure what it would entail?

So often I think we are prone to simply doing what we’ve always done, believing what we’ve always believed, praying how we’ve always prayed. We forget to notice beautiful things, and even when we do, we don’t let them soak in and transform us, which makes it harder then to put that beauty back out into the world. We think that if it hurts to let go of something, that must be a sign that we’re supposed to hold onto it — forgetting that sometimes the old has to be burned away. We forget that learning and growing and changing is a part of life, and we chastise politicians who change their positions over time, or mock people who adjust their behaviours as they learn new information. But from the simple things, like how we have learned the value of face coverings over the past eight months when initially they weren’t thought to be important, to big things like shifting our views and actions of colonialism or white supremacy or sexism, we all learn and grow and change.

How much more, then when it comes to God? We know that the love of God is never changing, but we also know that God’s call to us is for particular times and places…and that can change as the context we live in changes, even if that means we need a burning coal to the lips to make us ready for the new thing.

In Isaiah’s time, the political leader was changing, the world stage was in some disarray and it wasn’t clear how it would shake out, and the prophet needed to both be reminded of God’s unchanging power and majesty and also hear a new call for a new time.

Honestly, that sounds a bit like it could have been written today, doesn’t it?

So perhaps we ought to be ready for an encounter with the Holy…to soak up God’s glory and to listen carefully for what new thing God might be calling us to do in this new time. Like Isaiah, we may be overwhelmed by God’s greatness in the face of all the uncertainty around us, or we may cry out when we realise we can’t keep going on the same path. But also like Isaiah, we can trust that God will equip us with whatever we need for the days ahead, and our relationship with God will carry us, even into the unknown — and so we say, Here I am, send me.