Mary Sings -- a sermon for the fourth Sunday of Advent

Today we pick up right where we left off last week, with Mary visiting her relative Elizabeth. They're both pregnant and Elizabeth has blessed Mary for her trust in God's word to her. I'm reading from the gospel according to Luke, chapter 1, beginning at verse 46, from the New Revised Standard Version.

‘My soul magnifies the Lord,

and my spirit rejoices in God my Saviour,

for he has looked with favour on the lowliness of his servant.

Surely, from now on all generations will call me blessed;

for the Mighty One has done great things for me,

and holy is his name.

His mercy is for those who fear him

He has shown strength with his arm;

he has scattered the proud in the thoughts of their hearts.

He has brought down the powerful from their thrones,

and lifted up the lowly;

he has filled the hungry with good things,

and sent the rich away empty.

He has helped his servant Israel,

in remembrance of his mercy,

according to the promise he made to our ancestors,

to Abraham and to his descendants for ever.’

And Mary remained with her for about three months and then returned to her home. 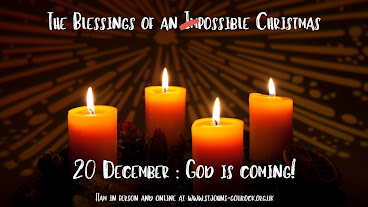 This week I read a startling news article. Did you know that 2020 is the year that human-made things literally outweighed nature? This is the year that all the stuff we have created — our built environment of concrete and metal and glass, machinery, waste, everything we own — all of that now weighs more than all the entire biomass of the earth. Plastic alone weighs more than all the animals on land and sea! And the vast majority of that mass has been created since the second World War.

Reading about this definitely gave me pause when I was shopping for Christmas gifts. How can we celebrate the Christ who turns everything upside down and at the same time not add to this heavy footprint on God’s beloved creation?

I also had Mary’s song at the front of my mind as I was reading about the study titled “poverty linked to higher risk of Covid death” showing that those living in poorer health board areas of Scotland were more likely to have severe cases of Covid requiring intensive care, and because fewer critical care beds were available in those areas, people in economically deprived areas are more likely to die. We’ve seen the effects of that in Inverclyde through this pandemic, and the statistics nationwide bear out that more poor and disadvantaged people are dying—both from Covid and from other things going untreated as the health service tries to cope.

And again, the news this week is full of the epidemic of drug misuse in Scotland, and here in Inverclyde a rising rate of drug use and deaths. Of course we know that drugs and deprivation go hand in hand, so it shouldn’t be a surprise to us.

Into the middle of this reality, where hope seems impossible, Mary sings.

Like all of us, she begins from her own personal experience. Though she was not a person of power or status or wealth, just a poor teenager in an out-of-the-way town in an occupied land, God noticed her. God loved her. God called her. And she sang of her gratitude, her awe and wonder, her praise. This thing that God had done — called her to be a prophet and the mother of the Messiah — would not be easy, yet she said that God had done great things for her! She may have been scared, as anyone in her position would be, but her confidence in God’s goodness was enough to raise her voice.

And then, halfway through, Mary recognises that her own personal experience, her own little life that has been unremarkable, is also part of something bigger. Something that God has been doing for a long time, and will continue to do through her and her son, and on into the future: upend the systems of this world and make them look more like the kingdom of God.

From generation to generation, God works with power and mercy, through the lowliest and the marginalised, to fulfil the promise that changes everything: scatters the proud, brings down the powerful, and sends the rich away empty, while lifting up the lowly and filling the hungry with good things.

This is the Word that becomes flesh in Jesus. This is the promise that Mary is bearing in her body, the fruit of her faithfulness. This is who God is and what God does — from the earliest days of scripture to the very end of the book and beyond.

I wonder how many of us would join Mary in praising God for these things … given that we are far more likely to be the proud, powerful, and rich in this scenario? We are, globally speaking, at the top of this system that God is turning upside down. We are the ones whose lifestyles have created a situation where our stuff weighs down God’s creation. We are the ones who stand at arms length from the realities of deprivation and wring our hands and make a donation here and there and pray for something to change.

We should be careful what we pray for, because the song Mary sings is definitely about change. It’s about an upending of a system that is, frankly, immoral and against the values of God’s kingdom. Which is not to say that those of us who benefit from the system are bad, but rather that the entire system is. We can't even claim that it’s broken, because the reality is that it’s working exactly as it’s been designed — to privilege the few at the expense of the many, to lift up some on the backs of others. And that system is exactly what God in the flesh will challenge, insisting on valuing every person as a beloved child of God, deserving of enough to eat and inclusion in the community and compassionate care…and that challenge is what will get him killed by the powers that do not want to be scattered or sent away empty. But the Mighty One who looks with favour on Mary will not be thwarted. Not this time, not ever. This is a promise that cannot be broken, and God will find a way to fulfil it, even if it means breaking the power of death to do it.

If this is what God is doing in Christ, then we who are called the Body of Christ had better be ready to be a part of it. If we celebrate Christmas and then nothing is different afterwards, we haven’t celebrated the Messiah that Mary is singing about today. Her words echo through the generations calling us to the kind of impossible Christmas that changes the world. What does the Word of God Incarnate have to say to those who live in such dire poverty that drugs seem the only comfort? Or to those who get richer while the poor get poorer? What does the community of those who love Mary’s son have to say to those who care more about their ability to shelter money in tax havens than about the lack of critical care beds in our hospital? How does the magnificat sound to the earth that groans under the weight of our economy’s need for constant consumption?

I’m sure I’m not alone in wishing Christmas was just about celebrating a birth and then getting back to normal life, just like any other birthday party. But what God is doing in Christ is saving the earth and all that is in it, even if that means saving us from ourselves. This is an act of love so monumental that it turns everything upside down. Who are we to wish that God would…what, love us a little less so we could go on as before? It’s impossible for God to do anything but love, and to fulfil promises, and this is the promise that makes Mary rejoice and that hopefully brings us the same kind of joyful commitment to God’s call that we, too, will be willing to bear God’s word in our bodies—and into the world that is desperate for the good news to be more than just pretty words or songs or cards or presents.