what more do we need? a sermon on the rich man and Lazarus

What More Do We Need?

Last week we heard Jesus teaching in parables about looking for the lost and restoring the wholeness of community. He proceeded straight after the story of the Lost Son to tell some very confusing parables related to how we use our resources, especially wealth, ending with the statement “you cannot serve God and wealth." Some Pharisees and other leaders heard him teaching and they mocked and criticised him, and Luke describes them as “Pharisees who were lovers of money.” Jesus then says to them, “you justify yourselves before others but God knows your heart.” That’s where we pick up the story today, in Luke chapter 16, at verse 19. I am reading from the Common English Bible.

Jesus said, “There was a certain rich man who clothed himself in purple and fine linen, and who feasted luxuriously every day. At his gate lay a certain poor man named Lazarus who was covered with sores. Lazarus longed to eat the crumbs that fell from the rich man’s table. Instead, dogs would come and lick his sores.

“The poor man died and was carried by angels to Abraham’s side. The rich man also died and was buried. While being tormented in the place of the dead, he looked up and saw Abraham at a distance with Lazarus at his side. He shouted, ‘Father Abraham, have mercy on me. Send Lazarus to dip the tip of his finger in water and cool my tongue, because I’m suffering in this flame.’ But Abraham said, ‘Child, remember that during your lifetime you received good things, whereas Lazarus received terrible things. Now Lazarus is being comforted and you are in great pain. Moreover, a great crevasse has been fixed between us and you. Those who wish to cross over from here to you cannot. Neither can anyone cross from there to us.’

“The rich man said, ‘Then I beg you, Father, send Lazarus to my father’s house. I have five brothers. He needs to warn them so that they don’t come to this place of agony.’ Abraham replied, ‘They have Moses and the Prophets. They must listen to them.’ The rich man said, ‘No, Father Abraham! But if someone from the dead goes to them, they will change their hearts and lives.’ Abraham said, ‘If they don’t listen to Moses and the Prophets, then neither will they be persuaded if someone rises from the dead.’” 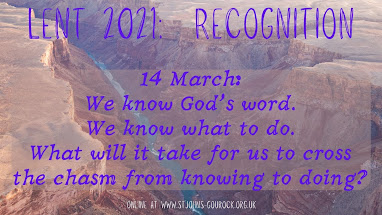 Lent is a season when we are meant to prepare for Easter by first noticing and then detaching ourselves from the things that separate us from God — things that take our attention and energy when we ought to be focused on God’s kingdom. We fast from things that distract us, so that we can be ready — or at least as ready as possible in our limited human reality — to receive the incredible grace of resurrection. Lent is about honest self-reflection, letting go, and clearing ourselves, body, mind, and spirit, so that we can repent and return to God’s way.

So perhaps it’s no surprise that readings like this come up in Lent. It isn’t exactly the cheeriest of seasons, when we confront our brokenness with honesty, sorrow, and hope. And this reading is not cheery. It’s one we’d probably rather skip over…but that discipline of truth-telling that we practice in Lent so that we can do it all year long requires us to confront the hard words Jesus has for us today.

The contrasts in this story couldn’t be more startling — between a nameless rich man who has the best clothes, and a poor man called Lazarus whose broken skin doesn’t even cover him, between the man who feasted luxuriously every day and the man who saw those feasts and wished for a crumb but starved just outside, between the one who died and was simply carried off, and the one who died and was given a proper and dignified burial.

There was clearly a chasm between these two men, and their experience of the world. They existed in the same sphere, living in the same space, looking at each other through windows, through the gate, or whenever the rich man left his house and had to step over poor Lazarus. They knew each other, but their lives were so different, they might as well have lived on different planets. One had more than he knew what to do with, and so had access to anything he could ever want or dream. The other had less than nothing, and could only look longingly and hope for mercy from those in his community — mercy that was never forthcoming. Not even a crumb.

Once they had both died, the tables turned but the chasm remained. They could still see each other, and speak to one another…and the rich man did. He was used to getting what he wanted, and saw no reason this time should be any different. So he begged for the same thing that he had denied Lazarus in life — just a drop of cool water. Just a drop, just a crumb.

But in asking, he betrayed himself: he called for Lazarus by name.

It’s easy to imagine that having lived such incredibly different lives, that the rich man might never have even noticed the poor man — just always studiously avoided looking. It’s something many of us who have spent time in cities are practiced at, the looking away, never making eye contact with people in need sitting on the side of the street. We stay safely on our side of the chasm, imagining we have little in common with “those people.”

He knew him. He recognised his face and knew his name.

He knew that man who sat at his gate, starving and wounded. Which means he chose to ignore his suffering. These two people lived in the same space and were in the same community and one of them simply decided that the other was not valuable enough to help. He preferred his sumptuous meals and beautiful clothes and didn’t care about anyone else, not even his closest neighbour, who lay at his very gate.

When the chasm he had created was brought to his attention, he was undeterred in his sense of entitlement to control Lazarus, asking for him to be sent away from the comfort he’d never had in life, back to the very place where he had suffered, for the benefit of the rich brothers. Who, for the record, appear to have never cared for Lazarus in life, so it’s not at all clear they would pay attention to him coming back from the dead either.

Abraham’s response should give us all pause. He said “they have Moses and the Prophets. They must listen to them.”

In other words: we already know what we’re supposed to do. The commandment to Love God and Love Neighbour are not news, they’ve been there this whole time. That’s supposed to be the core of who we are and what we do. What more do we need before we act on the word of God? What will it take for us to recognise the truth of God’s call, and respond to it?

Remember that Jesus told this story to “Pharisees who were lovers of money” — as Pharisees, they knew the Torah. They knew perfectly well the commandments and the words of the prophets through the ages, calling people to live God’s way. And yet their love was out of order. Rather than loving God with all their heart, soul, mind, and strength, and loving their neighbour as themselves, they loved money first.

I think Jesus told this story to show them what kind of world that out-of-order love would create.

The thing is, we know all this, and yet we choose not to know it. We know that we have created that chasm between us and them, coming up with all sorts of reasons why we can’t cross it to love our neighbour. And so we look away, and congratulate ourselves, jockeying for our return to normal while developing nations continue to die of covid with no access to vaccines. We look away as we place our stockpiling grocery orders, while people fleeing from violence or environmental disaster or abject poverty die, either trying to get here or in substandard accommodations in our cities. We look away as we justify ourselves as not knowing anyone who would do those things while women are abducted and killed for walking home after dark. We look away as we repeat rumours and jokes about others, while they hear us and wish they weren’t alive anymore. And the chasm grows, and grows, and becomes more and more fixed, and it feels impossible to cross.

Lent is a time for honesty, for the kind of self-reflection that brings us closer to the truth that sets us free. Choosing to live in ways that create that chasm, while the kingdom of God beckons from the other side, may feel like freedom but actually we end up trapped too, unable to get out of a system we can’t even see, and it can be terrifying to admit it. But perfect love casts out fear, and the Way of Jesus leads to life — not just surviving, but abundant life, eternal life that starts now. Jesus says, in this story and in plenty of others: you know the way. I am the way.

May we recognise our part in creating the chasms of this world, and choose to live by Christ’s command to love. Amen.