Trying to Make Sense of it All

Trying to Make Sense of It All

Now on that same day two of them were going to a village called Emmaus, about seven miles from Jerusalem, and talking with each other about all these things that had happened. While they were talking and discussing, Jesus himself came near and went with them, but their eyes were kept from recognising him. And he said to them, ‘What are you discussing with each other while you walk along?’ They stood still, looking sad. Then one of them, whose name was Cleopas, answered him, ‘Are you the only stranger in Jerusalem who does not know the things that have taken place there in these days?’ He asked them, ‘What things?’ They replied, ‘The things about Jesus of Nazareth, who was a prophet mighty in deed and word before God and all the people, and how our chief priests and leaders handed him over to be condemned to death and crucified him. But we had hoped that he was the one to redeem Israel. Yes, and besides all this, it is now the third day since these things took place. Moreover, some women of our group astounded us. They were at the tomb early this morning, and when they did not find his body there, they came back and told us that they had indeed seen a vision of angels who said that he was alive. Some of those who were with us went to the tomb and found it just as the women had said; but they did not see him.’ Then he said to them, ‘Oh, how foolish you are, and how slow of heart to believe all that the prophets have declared! Was it not necessary that the Messiah should suffer these things and then enter into his glory?’ Then beginning with Moses and all the prophets, he interpreted to them the things about himself in all the scriptures.

As they came near the village to which they were going, he walked ahead as if he were going on. But they urged him strongly, saying, ‘Stay with us, because it is almost evening and the day is now nearly over.’ So he went in to stay with them. When he was at the table with them, he took bread, blessed and broke it, and gave it to them. Then their eyes were opened, and they recognised him; and he vanished from their sight. They said to each other, ‘Were not our hearts burning within us while he was talking to us on the road, while he was opening the scriptures to us?’ That same hour they got up and returned to Jerusalem; and they found the eleven and their companions gathered together. They were saying, ‘The Lord has risen indeed, and he has appeared to Simon!’ Then they told what had happened on the road, and how he had been made known to them in the breaking of the bread. 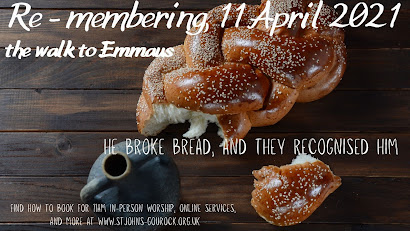 Have you ever had the experience of trying to figure something out, but you just can’t get everything to make sense? Like you have multiple pieces of information, but they don’t seem to fit together, and no matter how much you obsess about it — or what I call “thinking about things” — it just doesn’t come together into a complete picture. So you keep thinking it over, trying to see if you’re missing a piece, or if there’s something that you thought was right but isn’t, or maybe if you just think in a different order, it’ll all work out.

Now add in grief and crushed hopes, and that’s where these disciples were, on Easter afternoon. They had a lot of information, but it didn’t make sense. And when someone joined them along their walk and invited them to talk it through out loud, they started their story with past-tense hope. They used to hope. Once they had hoped. Their hopes were dashed, left behind, and all they had was a bunch of disjointed bits that they could not for the life of them figure out.

The stranger on the road listened to them as they wrestled with their confusion — with their “besides all this” and “moreover” and “but” — and then he started the story from the beginning. He talked of God’s work through people and places and events, from the shores of the Red Sea to the shores of the Sea of Galilee, and showed how all these seemingly disparate bits fit together as pieces of the larger picture. He invited them to see themselves as part of God’s story — in a way that only the living word made flesh could do.

Before they knew it, both their journey and the story were at an end — or at least, so it seemed. The two disciples were perhaps feeling a bit less scattered than they had been before. When their companion waved goodbye at their door and stepped off into the twilight, they did what any follower of Jesus would do: they invited him in for an evening meal. They had learned well the lesson of hospitality, as they traveled the countryside two by two, visiting villages with the good news. So they insisted he come in, and together they sat down at the table.

There, around their own kitchen table, with a simple evening meal, their companion picked up the bread and did what the host usually did: he took the bread and said the blessing: “Blessed are you, O Lord our God, ruler of the universe, for you have brought forth bread from the earth.” And he broke it in pieces, and gave it to them, serving them as if it were his own table.

In that moment of broken bread, they remembered. I mean, they re - membered. They put it all back together, and they themselves became whole again as everything fell into place. Their eyes were opened and they recognised him — recognised: to understand something they had known before. They saw Jesus, right there at their own table, being the host. And though they couldn’t understand it all, that moment drew them into a deeper reality that was there all along. They remembered all the other times he had taken bread, blessed and broken it, and given it to them — with the crowd on the hillside and at home after synagogue and in the borrowed upper room. They remembered the story he had told them on the road, and with the pieces of bread in their hands, it all just…clicked. Their eyes were opened, and they recognised him.

And before they could do or say anything, he vanished from their sight.

It turned out that neither the journey nor the story had ended. Jesus was alive, but not back, if that makes sense. They wouldn’t be able to grasp onto Jesus and hold him in place and just pick up where they left off before the trauma of losing him. Just a few verses after the end of our reading today, Jesus blesses his disciples and then ascends to heaven, leaving them to do all that he taught them — to teach his word, to heal, to welcome, to challenge injustice, and to take bread, bless and break it, and share it, so that others might also see him. Jesus is alive, and leading us forward into life too — and he left us with the power of the word and the bread together, and that was enough for the disciples. They still didn’t get him back to the way things used to be, but he gave us something we can do anytime to remember and be re-membered: to hear the word and break the bread, and see. Wherever they were, at any table, they could see him. Wherever we are, at any table, we can see him.

We are inundated with more information than we can really make sense of, but the story of God’s love and providing and leading is still there for us to enter into, and it can tie together things we never thought would be part of the same big picture. There are still unexpected companions on our journeys, and there are still people who need inviting in to share a meal. And we still need to share our experiences of seeing God. Because it is in telling the story of God’s saving grace to others that the Body of Christ is able to see the fullness of God’s goodness. It took the women’s story, and Peter’s, and the two disciples who went to Emmaus, all seen together, each in light of the others for the truth to become clear: that Christ is alive, and brings us into new life with him. Not into our old lives, but new life. Jesus may have vanished from their sight, but he is still visible when we make him known.

When we break bread together, we are re-made, re-membered into the Body of Christ. We are the ones who live as his hands and feet in our community, we are the ones whose voices speak his word. We remember all that he did and said, and by pulling that past story into the present, we help    others experience God today. If we will not act like Christ and share his word, where will people see him?

The first step into new life with Christ is that we must see him — not just a jumble of facts and moments, but a whole story God has been telling from the beginning of time and continuing on today. And we see best in the breaking of bread.

Look at this table. (And when you are at home, look at your table!)

Its familiar contours, that scratch on the leg, that one spot you shouldn’t lean too hard on.

Look at this table.

Everyone has a place here —

whether we sit at the same spot every time or this is our first visit.

Despite all appearances and expectations,

Christ is the host at this table.

He is the One who tells the stories,

the One who takes, blesses, breaks, and shares,

the One who knows us better than we know ourselves.

Christ is the host at this table,

and in him all our broken pieces are re-membered into his Body.

So come, take your place at Christ’s table,

and your eyes will be opened to recognise him.