One of the things we did today was look at a variety of "path" images, and see which one felt most like the path we are currently walking. some of the images were of idyllic forest or meadow paths, footprints on a beach, etc. Others were really more wide-open space. Some were briefly heart-stopping, like the guy sitting on the edge of an outcropping of rock over a canyon. Some were filled with people, others deserted. A few went all over the place and had no clear direction. Some had obstacles, others were smooth.

Of course, this morning before breakfast I was out for a walk and I noticed that one of the things that's hard to capture in a picture is the way some parts of the ground are green, covered with something that I know is moss but looks like algae. (of course, given that this is Louisiana, it could be algae, since the air is similar to standing water most of the year! though the humidity the last couple of days hasn't been bad...)

I was trying to capture it in a picture, and this is what I got: 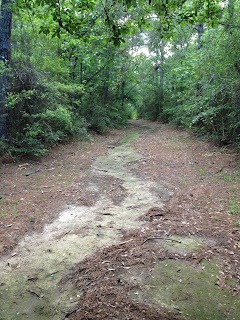 As I walked this path, though, I noticed that's it's really a two-in-one path. (and then I got a better picture later of the green dirt!) There's the wide path that goes...somewhere. And there's the path through the pine needles, clearly carved by water. That water path meanders a bit, but it goes inexorably toward its destination--other water (in this case, the lake).
of course, walking the water's path is more dangerous--that green stuff is slippery and the path takes many twists and turns. There's lots of opportunity to fall, to get hurt. It's a risk.

I wonder how often I try to walk a path that seems easier, when where I need to be is risk the path of the water, moving always toward where I belong?
(yes, there's a metaphor in there, for baptism and for calling, and probably for any number of things.)
I'm reminded of the sermon Calum preached at my ordination, in which he talked about how Earth is a closed system when it comes to water. The water we have now is all the water earth has ever had, and will ever have. So when we drink a glass of water, it's likely it was once dinosaur pee.
I don't remember the point of that illustration, but it came to mind again when I was thinking about the water's path within the path. That water wants nothing more than to rejoin its fellow water, and it will move earth and stone and pine needles and who knows what else to get there. And it always goes.
Maybe the path of the baptismal waters also pushes us inexorably toward the larger body, and ultimately toward the source?
We hope.
Posted by Teri at 4:58 AM