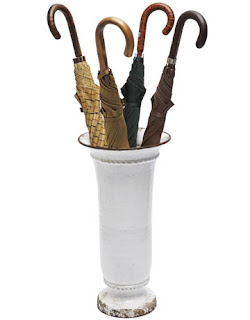 At the Solomon Episcopal Conference Center, every building's front door is flanked by umbrella stands stocked with huge umbrellas. Those in our group who'd not spent much time in the South couldn't really understand that--it seemed so sunny and nice all the time!

When two days of insane thunderstorms brought rain that caused the lake to overflow its banks, they understood.

We grabbed up umbrellas by the dozen and moved them as we moved. They were wonderful. Always available, good size for one or two people, keeping us dry in the downpour as we moved around the campus.

Of course, if it wasn't raining when we left a building, we rarely remembered to grab that umbrella we'd sheltered under just an hour before to take it to the next place or return it to where we found it. We left it drip-drying on the porch.

And someone--a wonderful staff member--would go around the campus and re-distribute umbrellas. They knew it was going to rain again. This two-hour lull at mid-day was a teaser, not an enduring reality. The storm was not past, just resting.

When the rain resumed, we again found umbrellas at every door, just where we needed them.

I had to wonder: whose job is it to realign the stock of umbrellas? How would we have felt if there was not an umbrella waiting on the porch when we needed one, because we'd neglected to take responsibility for the tools we'd been so graciously provided? How easy it is to forget that we still need to carry the tool, even if we don't appear to need to use it right this instant.

And is it the end of the world if my hair gets wet while I sprint from one building to another? (well, okay....maybe. probably.)

Sometimes I wonder if pastors are basically umbrella realignment specialists. It sounds a little more useful than Titanic deck-chair re-arranger (which is a job pastors are often accused of settling for!). We offer the tools...and hope that people carry them around even if they're not using them right this instant. But when they leave those tools lying around somewhere, we pick them up and put them back where they can be of most use next time the rain comes down. It's a behind-the-scenes job. Once I did see someone, across the campus, wrapping umbrellas and placing them neatly in a stand, but in the 2 days of rain that was the only glimpse I got, aside from the fact that there was always an umbrella there when I needed it. That person, whoever he is, equipped the saints.

Who is our umbrella realignment specialist?