Friday Five: ready for a break!

Over at RevGalBlogPals, Deb offers us a way to grab a little rest in the midst of the crazy. Just when I thought summer was going to be calmer, June was a whirlwind with so few nights at home that I barely remember what my kitchen looks like. Sounds like Deb had a similar month!


Whoosh! My calendar is packed. And June is almost gone! There's the old saying, "Bad luck comes in threes" but I've decided that "Busy-ness comes in fives!" So this week we'll take things five-at-a-time.


Tell me:
1. Five flowers you'd like in a bouquet or in your garden:

I'd love a bouquet of sunflowers, gerber daisies, roses, tulips, and perhaps a calla lily (the only lily I can be around without dying of pollen, apparently). I think sunflowers are so lovely, they just make me happy. And tulips. Roses are the only flowers that smell good. So, there you go.


2. Five books you want to read (or re-read):
OMG, just five? Well, two are sitting on the ottoman, waiting to be read before the library deadline: Wolf Hall and Bring Up The Bodies by Hilary Mantel--historical fiction of the Henry VIII era, told through the perspective of Cromwell. I'm in the middle of the 3rd Game of Thrones book, and several work books. Things I'd love to just stop and read again: Lamb and all of Harry Potter. (Yes, I cheated. oh well.)

3. Five places you want to visit:

I've been plotting about the possibility of a trip to Europe sometime in the relatively near future, so I'm daydreaming about Paris, Geneva, Wittenberg Cathedral, Berlin, and Prague.
I've also been pining after another trip to Rome, a visit to Australia (perhaps to do a real-life Camp NaNo with Kirsty!), and daydreaming about the Woodstock Inn in Vermont, which is probably the nicest place I've ever stayed in my entire life, and they keep sending emails. LOL.

4. Five people you'd invite for tea/coffee/beer and pizza:
Sticking with those currently living, at time of writing:
Michelle Obama
Jon Stewart
Joss Whedon
Nelson Mandela (gonna have to hurry, but it will be epic)
any of the hosts from the Stuff You Missed in History Class podcast.
(this would be the most interesting pizza-and-wine party in the history of ever.)


5. Five chores or tasks you'd gladly give to someone else:
litterbox duty
dishes
writing meeting agendas
checking the bank balance
can I list unloading the dishwasher as separate from doing the dishes?
(the fact that I found this list difficult speaks to two facts: 1. that I pay someone to vacuum and clean the bathrooms once a month. 2. I don't gladly give control of many arenas to other people.)

BONUS: A five ingredient recipe! (This is harder than it sounds!) 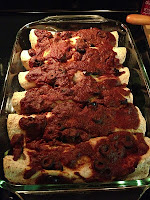 spinach enchiladas (6 ingredients if you eat dairy...) :
saute spinach, mushrooms, garlic together until soft.
cover bottom of baking dish with enchilada sauce.
spoon spinach/mushroom mixture into soft flour tortilla. Cheese is optional--if you want it, put it in now.
roll up and place seam-side-down in baking dish. When dish is full, pour enchilada sauce over the top. Put a few mushroom slices for decoration on the top of each enchilada. or shredded cheese, if you so desire.

bake about 20-ish minutes, until bubbly. serve with refried beans on the side. mmmmm....