Over at RGBP, Pat has a fun holiday Five for us.... 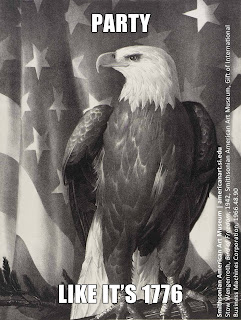 In honor of the 237th anniversary of the adoption of the Declaration of Indpendence, I invite you to participate in today's Independence Day edition of the Friday Five! We'll be looking at all kinds of "independence," so please join in!

1. How does one typically celebrate your native /adopted land's Big National Holiday?
The typical celebration involves grilled encased meats, parades, and fireworks. Because this is the Chicagoland experience, though, the fireworks last all week, both official and unofficial. People will be out exploding things and shooting both the air and other things/people as soon as it nears dusk. The suburbs have parades and fireworks on different days--so Palatine's fireworks are tonight, the parade is Saturday...Crystal Lake's parade is on Sunday...it's really more of Independence Week than Day. (And for the record: there was grilled pizza yesterday, not grilled encased meats. I'm a rebel.)

2. How do you personally celebrate the holiday described in #1? Any unusual twists on the typical celebration? Is it something you enjoy or endure?
Well, I obviously don't eat the vast majority of July 4th foods. Though I do love me some potato salad! I try to always listen to Capital Steps, which is hilarious (and yesterday was no exception!). Sometimes I go to fireworks, but this year I just listened to the neighborhood fireworks and the attendant dog barking that comes with that. Perhaps lamenting people's inconsiderateness, especially where explosions and pets are concerned, is a new tradition...poor Guinness was so freaked out.

3. What does the word "independence" mean to you, whether in a political or personal mood? How has that understanding changed throughout your life? 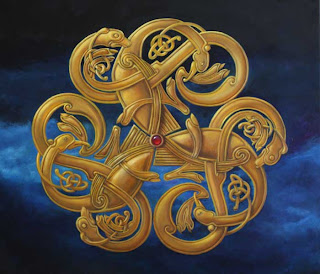 Hmm....I think it used to mean "being able to do what I want." Now I recognize more than ever that independence is an illusion. We are wildly interdependent beings. I think living into that interdependence brings more "independence" than all our desperate efforts to go it alone and do what we want.

4. When did you first feel that you, personally, had gained independence? Was there a 'rite of passage' you would like to share?
I suppose lots of these will be things like "when I could drive" or "when I moved out." I think there's some of that for me too--moving out and into the big city alone was an adventure, for sure, but let's be realistic: I have yet to get to a phase of my life when I'm not being supported by my parents in some tangible way. So I suppose my independence is more a gradual process of thinking as opposed to anything particularly measurable. I have been slowly figuring out how to not be mentally chained to a variety of issues, experiences, and people. Every time I notice one of those chains and let it go, there's a new bit of freedom in that.

5. Tell us about your favorite "indie" film, music label, book store...
oh my. There could probably be five things in this category alone. Let's see...how about independent restaurants? I have probably five faves there too. I love the local Thai restaurant, owned by a family that moved here the same time I did. And the local gastro-pub, which has a garden where they grown their own veggies! The mediterranean vegetarian place, owned by a member of the synagogue next door to RCLPC, is an amazing place with incredible falafel and big smiles every time I go in. The Chicago Diner has been bucking the culinary world's dependence on bacon since 1983 and I love it. And Chowpatti, from which I now work just 10 minutes away, is the most interesting conglomeration of foods ever--Indian Nachos are addictively delicious (and what an indie thing to do!).

Bonus Question: Is there a time you remember going "against the tide" of advice or precedent, or in some other way? Or perhaps a time you wish you had done so? Share it here!
I suspect much of my life has been going against the tide. Here's how I can tell: whenever I meet someone new and tell them what I do, the first reaction is a surprised/horrified "why did you want to do that??????" Joining the church as a young adult was weird.
But in many ways, of course, my life has been exceedingly average: I'm a perfectionist overachieving first born girl who appears to have "succeeded"--at least if you look from the outside. My family and friends are just dysfunctional enough to be interesting without being harmful. So...yeah.
Of course, I've rejected plenty of advice in my day. Too many times to recall or document! Sometimes that's worked out, other times it's been a disaster resulting in lots of "I told you so" moments. And I've followed plenty of advice I should have ignored. Pretty sure that's also a standard set of life experiences, though...
Posted by Teri at 5:22 PM