view from the X-Millennial bridge 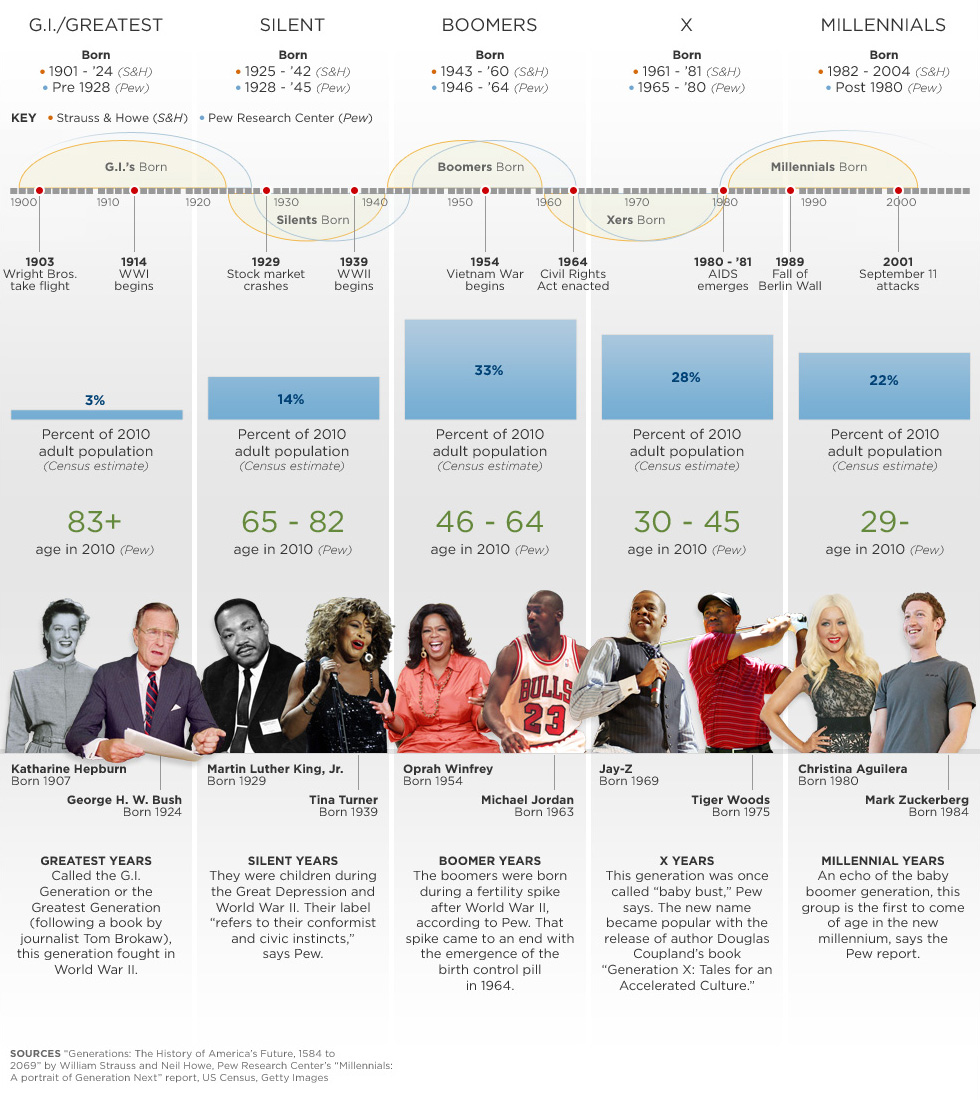 Over the past several months, I have witnessed or been a part of a large number of conversations in which people, often Baby Boomers, lament about "young people." By "young people" they mostly mean everyone under 50, so...at least two generations (X and Millennial) are lumped into that category.

This lament has taken several forms, including but not limited to:

There have been so many answers to the first several points here, I just don't even think one more blog post is going to matter. So, in short: the economy sucks, the world has changed, and it's no longer possible for most of us to get a job with insurance and a pension and a salary to support a whole family with just a High School diploma or even a Bachelor's degree. We're not lazy, we're working harder than ever just to pay the rent, and putting everything else on the credit card while we pray not to get sick. We're not entitled, we're looking for work that fits in with our two other jobs' schedules. I don't know where you saw everyone getting an award and no scores kept, but that's a fallacy so stop perpetuating it--when we were being noticed at all while you were climbing the career ladder, it was to be taught to play harder and run faster and be better so we could get into the best schools and have the best resumes so we could get a job. Not even a better job than our parents had, just a job, period. We have experienced some of the most competitive and pressure-filled lives, all just to live up to your expectations...only to end up unemployed because *somebody* (ahem) killed the economy and society with their runaway desires and entitlement. (if there are actually younger people, those squarely in the Millennial generation, for instance, who really did grow up with everyone getting an award and no one keeping score, who do you think started that? are you telling me that a whole generation of kids in the most individualistic competitive nation in the world suddenly went all ubuntu on us all by themselves???) And as for the working for justice part: I'm not even going to dignify that with a response beyond this: just because you don't see it doesn't mean it's not happening. It means you're controlling the media and don't want to see.

Now, to the last few points, where I really want to focus.

It's hard to listen when any of the above sentiments infuse nearly every sentence.

And when we're being told that "young people" are untrustworthy by the original purveyors of "never trust anyone over 30."

And when we are told we're lazy entitled worthless blobs by the same people who insist they're 30 on the inside.

It ends up feeling like people who realize they are no longer "young adults" are trying desperately to hold on to those glory days (even while still holding basically all the power and all the money and most of the jobs in our country) . Meanwhile, the rest of us are just supposed to wait in the wings until the two older generations have had their fun, lived their dream, found themselves, and gotten everything just how they like it. (but we'll be called lazy while we wait. and entitled for being upset that what we're left with is minimum wage jobs, crushing debt, broken systems, and a ruined planet.)

And while we're at it: it is good and right for people who are experiencing life in a similar cultural and generational cohort to be together. (this is why the Young Clergy Women Project exists--because being a 20-something clergywoman is a very different experience than being a 50-something clergywoman, even if we were both ordained yesterday.) AND it is good and right to have intergenerational friendships, gatherings, and groups--IF those intergenerational gatherings are not primarily about one generation informing another about how they should be/act/think more like the other. (this is why groups like RevGalBlogPals are so important--because clergy of all ages and experience levels can learn and laugh and cry and pray and dream and work together.)

So here's the deal.
We are grateful for the amazing work done by those who've gone before us. We are grateful for the stories we hear and the doors that are open for us in ways they weren't for others. We want to learn from those who have blazed trails. We see that there is still work to be done, and we see where the battle lines have shifted along the way.
And we also recognize that the world today is strikingly different than it was a generation ago. We have other trails to blaze, because we're solidly along some that others worked on for decades. We have a rapidly changing globalized culture and technological reality that takes serious work to navigate. We can't have the same kind of American Dream that previous generations had, if we can have it at all. We don't use the same social outlets, trust the same institutions, or anticipate the same retirement (or any retirement...even if you have been retired since before I was born, that doesn't mean I'll get that...).

Please: if you hear yourself starting with "we used to...", stop and ask what's changed since you used to do that. If you hear yourself going down the "I'm not old!" road, stop and ask why it bothers you to allow young adults to exist without you among them. Why does it matter so much that you're in a new life stage with all its attendant possibility (and, realistically, power and influence and relative wealth)? In other words: why do you insist that "young people today" need to "grow up/mature" but you don't? And young people: if you feel the eye-roll coming on, squash the urge and instead listen to the stories. 99% of stories contain a nugget that can work its way into the 21st century framework, or a thought that can break open a problem, or an experience that shines light on the next part of the road--IF you listen with the right lens.


PS:
this post probably sounds angry. I've written and deleted it half a dozen times over the last few months, but the conversations I've seen both on news articles and in groups I'm a part of lately pushed me over the edge. I am tired of people refusing to relinquish the adjective "young" even as they trash young adults, all while ignoring some serious economic and cultural realities. So I guess this is my really long way of saying SERIOUSLY, PEOPLE? SERIOUSLY. In my best 80s kid voice: can't we all just get along? Or is it literally impossible for people who wish they were still young to move on without ripping everyone else to shreds? Because that's what's happening here. One generation is building itself up by tearing the next down. just stop it already. (or, as I said in my sermon on Sunday: It is not okay for us to sacrifice one another on any altar. Not even the altar of our own whitewashed memory or the altar of our own self-esteem.)

Labels: it's all about me, justice, since you didn't ask my opinion, thinking out loud