before Tiny Houses were cool...

Almost every week it seems there is another article or video about Tiny Houses. Google brings up 22.4 million hits just from that phrase. People are making living spaces in freight containers and on trailers, and living in their ingeniously designed 250 square foot space in the woods somewhere. Or in an alley. Or wherever they want, because their house is on a trailer.

If there isn't a Tiny House article, there is a minimalism/get-rid-of-your-stuff article. The latest compiles some startling statistics, including things like "most Americans have 300,000 objects in their home" and "nearly half of Americans can't park cars in their garage." We have more offsite storage than we do people, which means that we are (bizarrely, I think) paying to store things we never see. Are the things in our storage units useful? Do they bring happiness to our lives? If so, why are they stacked in a locked room in a climate controlled building miles away from the house, opened only to put more things in?

I've never been a big accumulator of stuff (besides books...), so I don't really get it. I'm kind of trying to pare down even what I do have, as I seem to have gathered more things than I need or want over the past 9 years of living in one place. (though that article says the average woman has 30 outfits, whereas in 1930 she had 9. I'm super retro, apparently...I have about 10-12, max.) I know people say that stuff will fill the space, and that living in the same home for a long time means you accumulate things more so than if you move frequently (because who wants to pack all that stuff?). But still. 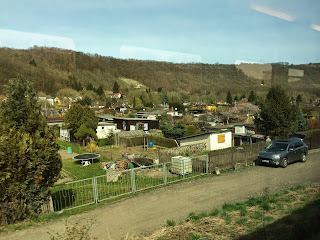 While in Europe this spring, we noticed a large number of little communities that at first appeared to be like community gardens, with garden plots and sheds. Look closer, though, and discover they are neighborhoods. There are garden plots, and swing sets, and lawn furniture, and clothes lines...and those sheds are homes. They have lace curtains and everything. Many of them are smaller than a shed I could go buy at Home Depot and assemble this afternoon in my backyard (if I had a backyard). 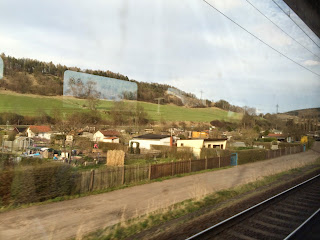 Usually these little communities were on the outskirts of a larger town, and often near the train tracks, although in Wittenberg it was just a couple of blocks off the main medieval streets (and would have been just outside the old city walls). 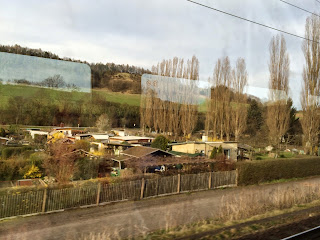 I suspect that little enclaves of tiny houses have been here, at the edge of town, for centuries. It's like the 21st century version of the villages surrounding a castle, where everyone grows a little food and lives in two rooms and maybe comes through the city gates a couple of times a year for a market or festival. Except now people have cars that they park at the edge of the village.

It's strange to think of people living in such small spaces, in what appears from the outside to be hovel-esque conditions, in the Western world in 2015. Even though we primarily saw these communities in former East Germany, it's still jarring to those of us who are used to spacious homes and large yards and storage units. Of course, to people from other parts of the developed world, it's jarring to see how many people here are homeless--a situation which could potentially be remedied with something like tiny house communities, or at least slightly ameliorated, if only we would decide they were legal.

And yet we have this fascination with Tiny Houses. 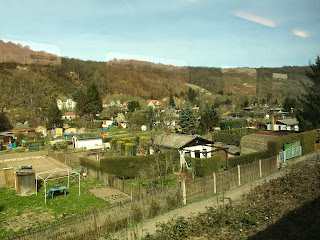 I wonder if the people who live in these before-they-were-cool Tiny Houses have a fascination with 1500 square foot houses? Or if they enjoy living their Tiny House lifestyle as much as we imagine we would?