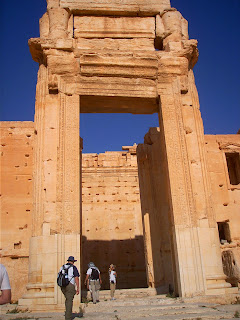 The news about Palmyra is distressing. (though the latest news today, that ISIS have placed guards at the ancient site, is the tiniest of glimmers of hope for antiquity, it's still not good.) I have been there, and can picture the place and the people in my mind (and in my photo album). I remember standing on the stage of the theater in the Roman ruins and playing the recorder as a way of demonstrating the acoustics of the place. I remember my roommate and I being left behind (and retrieved later, thankfully)...a demonstration of the potential for failure in the buddy system. I remember walking around this place in the desert, climbing the tower and marveling at how these things still stand out in the middle of the desert. I remember meeting people whose connection to this desert oasis wends its way through millennia. 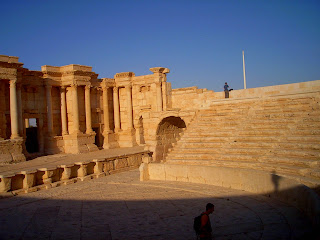 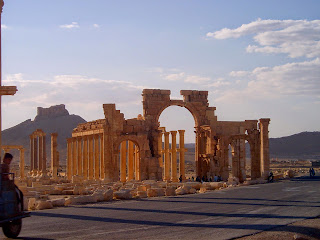 ISIS has been known to destroy historical sites and artifacts before, because anything non-muslim (including things that predate Islam by hundreds and thousands of years) is idolatrous. Unfortunately that also destroys both any potential future economy based on tourism as well as, more importantly, a whole people's connection to a long and glorious past. And even as those ancient walls come down, new ones are built, between neighbors, between families, between friends...because where once it was common for Christians and Muslims (both of various flavors) to coexist, work together, be friends, etc, now that is nearly impossible. Along with holy and archaeologically significant sites goes the kinship of the Syrian people, which goes back hundreds of generations.
(and I can't even get into the human toll of this "conflict" (so much more than a conflict) in the present--it is beyond imagining, the suffering and grief and fear.)


As ISIS continues to advance, taking control of more cities, oppressing more people, and destroying more history, I thought I'd share this piece I wrote for another publication that ended up not being published.

First, some more photos from the ancient city of Palmyra... 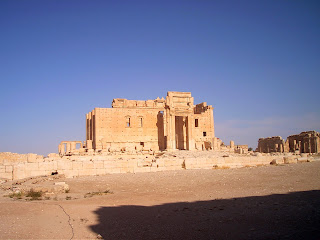 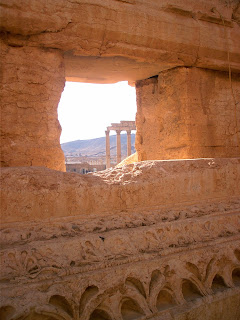 According to tradition, the Prophet Mohammed visited the monastery of St. Catherine’s at the foot of Mt. Sinai in the 7th century. He sought the wisdom of the monks there, and later wrote a letter of protection for the monastery, which was reaffirmed in the 16th century, declaring that these People of the Book were to be safe from harm and from attempts at conversion. A mosque and minaret were built inside the walls of the monastery, as a visual symbol of the protective relationship between these brother faiths.

Over the centuries, that friendship has deteriorated into a minimum of tolerance, and now the corruption of the faith traditions has brought outright hostility. Life was not easy for Christians in pre-Arab-Spring nations—building permits were routinely denied simply because they were filed by Christians, evangelism and conversion were illegal, and the entire governmental, legal, and judicial system gave preference to Islam. But now those things seem almost reasonable in comparison to the impossibility of life as a Christian or a Christian community in these days. The ranks of the martyrs grow daily, as do the ranks of the émigré. Of the many friends I made while living in Cairo, only a few remain; the rest have scattered to Australia, Canada, the United Kingdom, Sweden, and two to the USA. The cradle of civilization and of many of the world’s great faiths is being emptied of all of them—including Islam, in its truest sense.

In place of a beautiful tradition of peace and submission to God, there is now a premium priority on a cultural reality that is as foreign to many of us in the west as the ancient languages still spoken there.

The culture of much of the area we call “the Middle East” is based on a tribal honor-and-shame system, and this system requires a very strong leader who will maintain order and image. This leader ensures that there is nothing that would disturb the outside world’s perceptions of the quality, success, and peace of the tribe—and will often use any means to do so. While Americans look at leaders like Saddam or Mubarak and see dictators, people within those tribes see a strong leader who keeps them together and who keeps their family business within the family. While life was not easy for Christians under those dictators, it was still relatively calm and peaceful. Churches could gather for worship and study (though building a church was extremely difficult), Christians could (and did) engage in many charitable and developmental ministries, improving the lives of many who would otherwise be neglected. As long as they didn’t proselytize, the gospel could be lived out without words. And the family order was maintained, if only at the barest level of the Prophet’s command.

Other forms of leadership, based on other kinds of power, are weak in this kind of cultural reality, and make it difficult to shift toward a more open or democratic system. So we see it today: where strong leaders have been felled, thus bringing shame on the tribe, now others rise up to return the tribe to its former status and restore the peace. Many of them think the way to that restoration is by the same kind of violent power that worked in the past, and so we see the horrors perpetrated by both governments and groups like ISIS. All dissent must be crushed in order to bring back the calm and honor of the family—in this case, the family of a particular brand of militant “Islam”.

While the Prophet was friends with Christians and ordered their protection, groups like ISIS take another path, one that violates every sense of humanity and brings more dishonor on them than they can see. Their faith is corrupted, just as they believe their tribe has been corrupted. In many ways, it is a farce to call them ISIS, because there is nothing Islamic about them—they are so far from the tenets and roots of their faith as to be unrecognizable.

Our sisters and brothers in Christ bear the brunt of this form of “Islam,” unmoored from its story and its roots. We who live far removed from the daily reality of persecution and the very real threat of death for our faith have a hard time even contemplating these horrors, let alone understanding. As we pray for peace, as we lobby our government to find some way to protect people without causing more of a mess than we already have, and as we look for ways to ensure our dollars don’t inadvertently go to support the *ISIS cause, it is important also for us to realize how easy it is to become disconnected from our story, and then we become capable of great terror. History matters. Scripture matters. Our connection to the story God has been telling since the beginning matters. It is what makes us human, and capable of honoring the humanity of others. May those who twist their tradition to support their violent ideology be re-connected with the ground of their humanity and the source of their faith.
Posted by Teri at 5:19 PM