that time cooking dinner made me cry 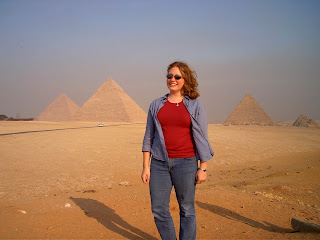 It's been 10 years to the day (November 26, 2005) since my first visit to the pyramids of Giza (and Sakkara, and the temple/city at Memphis...but Giza is the part most people recognize). 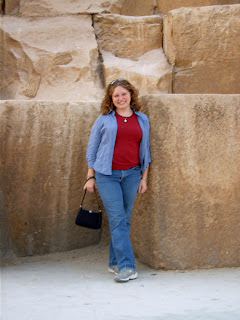 It's been 10 years to the Fourth Thursday Of November since I returned to Egypt after my mom died--I went "home" when she died, and after a few weeks I went "home" to Cairo, where I celebrated Thanksgiving with the other North American mission personnel from at least three denominations. I even managed a green bean casserole, which was harder than it sounds.

Tonight I was making black beans and olives--which is so delicious, even though it sounds weird, so just stick with me--which was one of what might be called my mother's signature dishes. It's the thing most people still remember, even all these years later. I both miss and try to recreate lots of things she used to make--enchiladas, homemade refried beans, bagels (ok, I haven't tried those...hers were so good I just can't bring myself to do it). She decorated cakes and indulged curiosity brought on by cookbooks and later the advent of the internet.

But black beans and olives...seriously, people, delicious. With basically three ingredients:
green olives (with pimientos)
black beans
garlic
you can have so much goodness on your plate you won't even want to eat anything else.

(I did...I also had brussels sprouts, cooked Susan's way. So it was a Scott Sisters dinner at my house today.)

Anyway, while I was slicing what turned out to be a sort of obscene amount of olives, I was thinking about my mom. Which, who are we kidding, is what I do in the kitchen anyway. But then I started thinking about Thanksgiving, and how ten years ago I actually worked really hard to be back in Cairo by Thanksgiving, because a) I didn't want to miss the trip to the pyramids, and b) I couldn't imagine Thanksgiving in the US without my mom.

So while I was remembering that, and slicing more olives, and using my pressure cooker (thanks mom) to soak beans without waiting overnight, and I thought about all the people who made that possible. Laurie, in the Louisville office, who kept her AOL Instant Messenger open all the time and arranged my plane tickets within minutes of me asking. (and who sent flowers!) Beverly and Martha, who planned a beautiful service so I could have that before I went back. The congregation of Church of the New Covenant, where every single person stayed after Sunday worship for the extra service. My fellow YAVs, who tried their best in a very strange situation they didn't sign up for. The RevGals, who were virtually present at every time of day or night. (when blogger got comments, I lost all the comments I used to have when I had an add-on service for them, so you can't tell, but they were there, I promise.)

In general I feel like this October-November has been harder than others. I'm not sure if it's because it's a big milestone year, or if the early onset winter is ruining my coping skills, or having a knee injury (which she had a few of in her lifetime) or what. But I miss my mom a lot. All the time.

So I thought I'd just look in the drawer where I keep a few things. Nothing drastic, just a few pieces of paper.

Note to self: it's never just a few pieces of paper, even if it is. 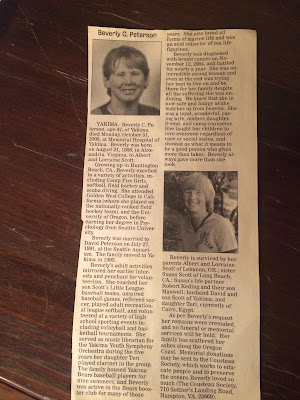 obituary....so little space to sum up so much life lived in just 47 years 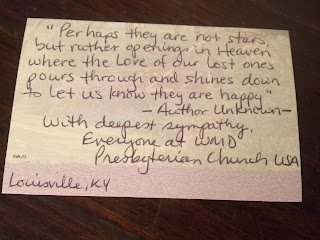 the card that came with flowers 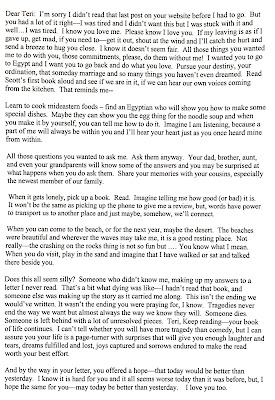 Beverly preached a homily in the form of a letter from my mom to me, in response to this letter I wrote while she was dying thousands of miles away. This is the first time I've pulled it out of the drawer since she gave it to me, ten years ago November 20. I can barely even read it because just remembering it puts me into ugly-cry territory.