Currently, I live about 50 yards from the beach. It's amazing, and I walk on the beach most days. Someone on Facebook described my photos as "the moods of my beach" and that seems about right...sometimes it's glowing: 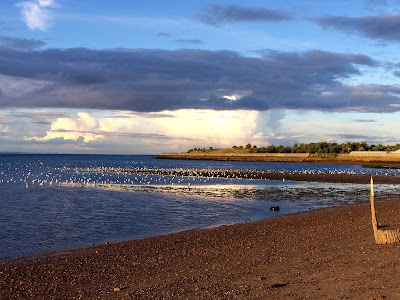 And sometimes it's a little...well...moodier: 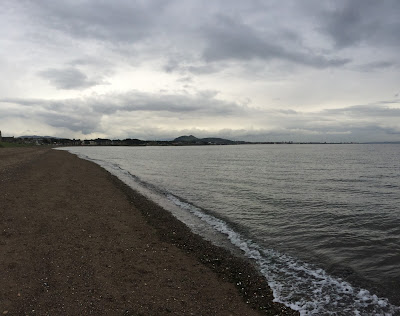 One night recently I was out walking and this tiny perfect pink shell caught my eye. 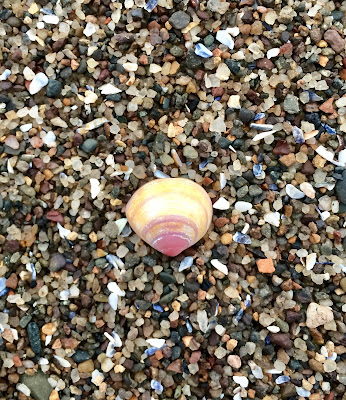 As you can see, the beach is not fine sand in this particular spot, but rather it is in various stages of becoming sand. Rocks and shells in many sizes, from complete to tiny fragments, being pounded by waves and rain and wind and people and dogs and horses and seagulls, until it becomes the kind of sand people think of when they think of a beautiful beach. The other side of the harbour has that kind of sand, but this side is more beautiful, I think, as you see a little more behind-the scenes of beach-making.
Anyway, I was looking at this shell, which was perfect, and pink on the inside, and gorgeous in every way, and pondering how it caught my attention in the midst of this particular beach. I picked it up to take home with me. I sent Julia a picture, and told her about it...and then I noticed that it wasn't in my hand anymore.
I had dropped it somewhere along the way.
I hadn't walked far or fast, as I was enjoying the beach and also texting (which normally I try not to do when I'm on the beach!). But still, it was gone.
I immediately tried to retrace my steps and figure out when I'd dropped it and if I could find it again. The tide was coming in, which changes the colours, and also, as you can see, finding one shell in this walk is easier said than done: 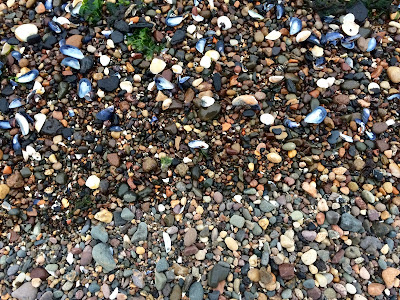 I looked and looked. I walked slowly, head down, bending over constantly. I tried to guess when it had slipped silently from my hand and back to its beachy home. I probably went over the same twenty feet of beach, in an 18-inch-wide swath, three times. My Fitbit must have thought I was insane. I looked until my back was beginning to get sore from hunching over, and until the water encroached on the very place I had been walking.

While I was looking, I had several times I thought I found it. The first one was so similar I actually texted Julia that I'd found it (phew!)...but on looking more closely, I realised it wasn't the same shell. Then I started to find others that were obviously the same animal/type, but again, were not the same shell.

Eventually, I had three that were not the one I was looking for, and I couldn't stay out there any longer with no coat and the tide coming in. I debated: drop the three shells that weren't the perfect one I thought I wanted but had lost? Or take them home, as a reminder not to text on the beach? 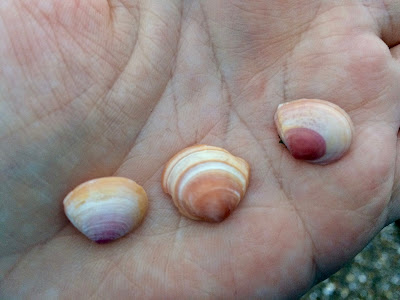 As I walked home, three shells in hand, mild self-recrimination reverberating through my disappointment at having lost the shell I thought I wanted (even though just moments before I dropped it, I'd never even seen it before and didn't know I wanted it), I realised:

And sometimes the three in my hand are beautiful, and perfect in their imperfection, and one of them could be just the thing.


Note: I'm literally at the very beginning of this process....as in, today I worked on turning my PCUSA search paperwork into the type of CV that is expected here. I've not actually applied anywhere and I don't have any particular place in mind as yet, other than hoping God is calling me to someplace where I don't have to figure out how to afford a car...and also not-secretly hoping to stay somewhere near a beach, LOL.