What do you see?

This summer at church we began doing a new thing. It started because there's no junior church/Sunday school in the summer. It's continuing because it's awesome.

We invite the children to come to the front (that part isn't new), and talk with them about the background to one of the scripture readings. It might be setting the scene, or remembering things we know about it, or looking at pictures of where it took place.
Then we ask them to listen for something--what's the problem, and who solves it? What four things does Jesus do with the bread? What are the names of the people in the story?
Then the liturgist comes forward and reads the scripture while the children stay in their place at the front--ideally, the liturgist stands in front of the group of children and reads sort of like story time, but sometimes they read from the lectern because it's easier to manage the paper/book and microphone and everything.
After the reading, we turn back to the kids and ask if they heard what they were listening for, and we talk about the story a bit.
Then we have some music, during which they could choose to stay there right at the front, sit in a pew with someone, or go to the children-space at the side, where there would be colouring sheets and activities related to the reading, and an adult to help them join in when it was time for the Lord's Prayer or a hymn. (Now that junior church is back in session, they go out at this point, though staying in this space is always an option for them.)

This has been working really beautifully, and engaging our young people (and our less-young people!) in how to listen to scripture being read, and to participate in worship more fully. They don't always sit still or quietly, and sometimes people grumble about reading a translation of scripture that is more understandable (over the summer we read from the CEB), but overall, it's been pretty great.

On the last day of the "generation to generation" series where we had been trying this out, we decided that the sermon would be an all-age experience where we would encourage the whole church to join in.

The text was a bit of Peter's sermon in Acts 2--the part where he quotes the prophet Joel about "your young will see visions and your elders will dream dreams."

We printed this picture on the cover of the order of service, and after the scripture reading we asked everyone to look at it and say what they saw. 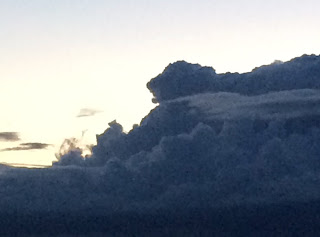 Kids were all over this, of course, and pretty soon the grown-ups were also calling out what they saw in the cloud.

And then we got this one. We looked at it from multiple angles, and saw a variety of things. What do you see? 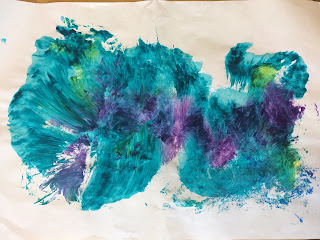 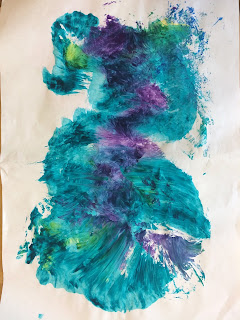 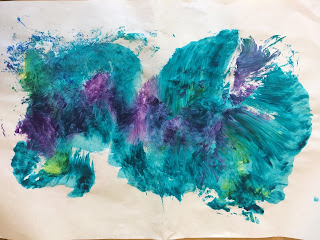 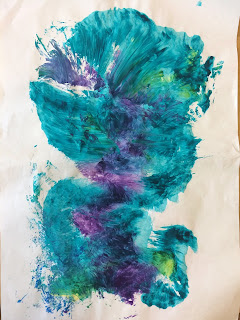 I finished up by talking about how that first Pentecost morning, some people could only see what they expected--chaos, irritation, drunkenness. But some could see a new thing, a vision, a dream...and we can practice opening our minds and hearts to see God's handiwork, too. We could see a cloud. Or we could see a puppy, or a grandma knitting in a rocking chair, or a teddy bear and a chicken. We could see a messy splotch of paint, or we could see a dragon, or an elephant / whale / seahorse, or a pregnant woman with her hair in a ponytail. We could see children behaving badly when they're whispering and wiggling and getting up to move around, or we could see children who want to know Jesus and can't see over the person in front of them, who want to know what we're singing, who have prayers they haven't yet learned how to pray...and we could see a church ready to allow their visions to join with our dreams, to be a family where each member is valued no matter their age or ability.