Standing Stones -- a sermon on entering the promised land 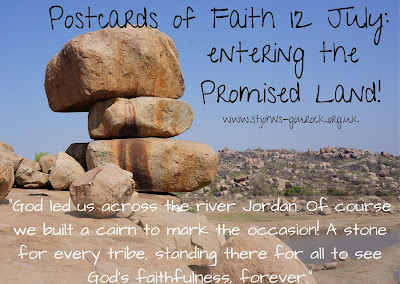 Can you imagine the what the Israelites’ journals and diaries would have been like as they made this journey from Egypt to the Promised Land? Imagine for a moment that it was a literate society and that paper books and pens existed…

There would have been entries from the oasis at Elim, where there were twelve springs and seventy date palms, where they finally experienced abundance after years of slavery and had a chance to reflect on that journey walking through the Red Sea. There would be pages grainy with dust from Mount Sinai, detailing the commandments God had handed down and the experience of standing trembling before the mountain. There would be space for them to process the sorrow and amazement as they learned how to rely on God to provide manna and quail and water in the wilderness. There would be the quickly dashed-off note about that incident with the snakes, maybe even a drawing of the serpent on the pole, but don’t worry it’s okay now. There would probably be quite a few days that just said “well, we’re still walking…” There would be the pages that included tributes and obituaries and memories as the first generation who left Egypt began to die and the youngsters grew up to leadership of the families and tribes and nation, taking on the journal for themselves.

And then there’d be the pages standing at the shore of the river Jordan, their new home so close they can almost taste it. But it was also full of spring rains, bursting the banks, rushing fast as they looked on.

This was the moment that they needed to draw on their memories. Not their own physical memories, but institutional memory, the stories handed down from generation to generation. Forty years ago, their parents and grandparents had stood on the shore, freedom so close they could taste it, but dismayed at the challenge ahead. There seemed no way to safely bring everyone across. And God had done an amazing thing, pulling back the waters and leading them through on dry ground. Since that day, God had led them, provided for them, taught them, listened to their complaints, brought them back from the brink of self-destruction, and stuck with them through it all.

Standing on the banks of the flooded Jordan, recalling all that God had done, the priests who were carrying the ark of the covenant, the big chest that held the tablets of the law, and a jar of manna, the piece of art and furniture that symbolised God’s presence with them, did the only thing they could do: they took one step into the water, and then another. And a miracle happened: they were the only ones whose feet got wet.

Once again, God brought the people across — on a stony riverbed and the legacy of their ancestors’ stories.

Now that they’d entered the land that would be their home, they knew this sort of experience was unlikely to be repeated for their children and grandchildren. They knew they had received a great gift, to be able to re-live their people’s history just this once, to have passed through the waters to freedom from slavery and now passed through the waters to freedom for faithful living. But they didn’t want to forget, they didn’t want their children not to know the story. So they took up some stones from the river and stood them up in the camp.

Maybe it was like a stone circle, or maybe it was like a cairn. Whatever the case, it was built to prompt discussion — not to stand silently on its own, but to point the way to both the past and the future. Joshua says “when your children ask what this means…” because he anticipates that these stories will be passed down, that they are a crucial part of forming a people.

Every family has those stories — the ones that we look back on and laugh about during holidays, or at weddings and funerals. The ones that we carry with us and that make us who we are, as individuals and as a family. Sometimes we even have objects that remind us — a dish, or a piece of art, or a hole in the wall, or a knick knack on the shelf. Whenever someone new comes into the house and asks about it, we get to tell this story over again, and it strengthens our ties to each other and our history…and the best of these stories give us something to draw on when we face the road ahead.

The stones pulled from the river were a reminder that God had brought them to this place, had removed obstacles, provided everything they needed, and taken care of them. God could be trusted, therefore, to be their guide and help in times to come. There were twelve stones, for the twelve tribes, because the whole community did things together, for all of them were God’s people. These stones provoked memories and invited people to tell stories, and they also pointed the way to the future: together, trusting in God, they could flourish and be whole.

I wonder what stories we tell of our own community that form us in this way? When someone asks about what an object or a building means to us, or why we do things the way we do, what do we say? What connections do we see between our ancestors in this place and ourselves? How are we still living out the story they left for us?

There is a moment in the musical Hamilton when two of the characters speak to their newborn children, and each of them says, referencing the fact that the children were born at the same time the nation of the United States was, “if we build a strong enough foundation, we’ll pass it on to you…” I have been reflecting for the past week or so that in many ways, the USA is indeed still living out the story of that foundation, but unfortunately it was flawed and that always leads to cracks in the house. The foundation needs fixing, but that’s hard work. That’s true for a nation, or a church, or a community, or an individual. We need to dig deep and do some uncomfortable work if we’re going to heal and build something stronger for everyone.

Perhaps it’s time for us to consider the stories we tell as a family of faith, and ensure that they make us into the people we are called to be. To read through their journals of their journey with God and learn the lessons they once learned. To look back at the stones our ancestors set up, and to ask “what does this mean?” and listen to the whole story, and determine if that is a story we want to build on. And then to use them the way a cairn was meant to be used — not only as a marker of the past, but a pointer to the future. It shows us that God brought us this far through every kind of obstacle, and calls us to trust that God will lead us onward, no matter what challenges we might face. Sure, we don’t stand on the banks of the Red Sea or the flooded Jordan, feeling cut off from the promise of life in all its fullness, unable to move. But we do stand at the threshold of something we don’t yet see, and the obstacles seem insurmountable…yet we know that nothing is impossible with God. So we are able to remember the stories of God’s faithfulness, and then turn our faces forward, knowing we do not go alone.