#SoBlessed -- a sermon on the visit of the Queen of Sheba

When the queen of Sheba heard reports about Solomon, due to the Lord’s name, she came to test him with riddles. Accompanying her to Jerusalem was a huge entourage with camels carrying spices, a large amount of gold, and precious stones. After she arrived, she told Solomon everything that was on her mind. Solomon answered all her questions; nothing was too difficult for him to answer. When the queen of Sheba saw how wise Solomon was, the palace he had built, the food on his table, the servants’ quarters, the function and dress of his attendants, his cupbearers, and the entirely burned offerings that he offered at the Lord’s temple, it took her breath away.
“The report I heard about your deeds and wisdom when I was still at home is true,” she said to the king. “I didn’t believe it until I came and saw it with my own eyes. In fact, the half of it wasn’t even told to me! You have far more wisdom and wealth than I was told. Your people and these servants who continually serve you and get to listen to your wisdom are truly happy! Bless the Lord your God because he was pleased to place you on Israel’s throne. Because the Lord loved Israel with an eternal love, the Lord made you king to uphold justice and righteousness.”
The queen gave the king one hundred twenty talents of gold, a great quantity of spice, and precious stones. Never again has so much spice come to Israel as when the queen of Sheba gave this gift to King Solomon.
King Solomon gave the Queen of Sheba everything she wanted and all that she had asked for, in addition to what he had already given her from his own personal funds. Then she and her servants returned to her homeland. 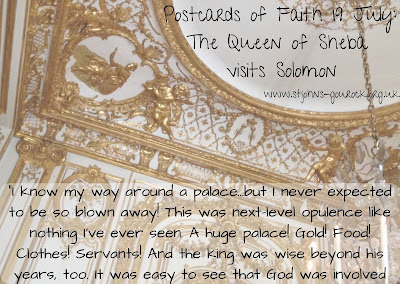 Several years ago I celebrated my birthday by taking a trip to France, Switzerland, and Germany. I landed in Paris on my birthday, and after a day wandering about, I got on a train out to Versailles, where my grandma had booked me in at the fanciest hotel I will ever stay in, as long as I live. From my room’s multiple balconies, I had a view of the palace, and the next morning, I walked over and began what felt like a completely surreal day. The fences are covered in gold. The doors too. And the walls. The chairs, the dishes, the artwork…literally everything, everywhere I looked, was gilded. The enormous palace, filled with beautiful things, was the most opulent place I had ever been. It was breathtaking.

I imagine that’s a little bit like what the Queen of Sheba experienced when she arrived at Solomon’s palace. Granted, unlike me, a 30-something minister just barely hanging on to the bottom of the middle class at the time, she was fabulously wealthy herself, queen of a nation that controlled the major trading routes across the Arabian peninsula and across the sea to North Africa. She was used to palaces and gold and jewels. Yet even one of the wealthiest monarchs of one of the wealthiest nations of the time was overwhelmed by the grandeur of Solomon’s life. It even says that it took her breath away.

When she saw all his wealth and wisdom, she proclaimed that it was because of God’s love and blessing that he was king, and that his kingdom was so happy. And in so doing, she reminded Solomon that his job as king was to uphold justice and righteousness.

The thing is, he wasn’t exactly doing that…and his kingdom wasn’t exactly happy. Just as the prophet Samuel had told the people when they first asked for a king, Solomon had conscripted people into both his armies and his workforce, building palaces and temples, serving in the palaces and temples, and generally working very hard for not a lot of reward. He was gaining more and more wealth both by taxing people and by receiving gifts from other nations and tribes as they worked out trade agreements — like the Queen of Sheba was likely there to do, bringing her gifts and taking others away with her. Solomon was well insulated from his people, and he began to make choices that were not in line with the faithfulness God required.

It’s interesting that the queen uses the word “happy” to describe Solomon’s people and servants, because it’s the same word that the psalms use to describe people who follow God’s way. “Happy are those who do not follow the advice of the wicked, but their delight is in the law of the Lord…” Yet Solomon had already begun to stray, marrying foreign princesses and adapting to their worship, in order to make alliances with other nations; forgetting to take care of the poor while he amassed vast treasure; using and abusing people to build up his kingdom. He was indeed gifted with incredible wisdom, but the purpose of that gift was so that he would be able to govern rightly. The more separate from the people he became, the less he was able to use that gift for its true purpose. The Queen of Sheba reminded him of it that day…though the reminder doesn’t seem to have lasted long.

This is one danger in the way of thinking that sees wealth as blessing. The queen takes Solomon’s palace, possessions, and people as a sign of God’s blessing — as does Solomon, most likely! And often, we all do this. We talk of the blessings of having a decent income, a nice house, a chance to go on a fancy holiday. We look at those who are less fortunate and we count our own blessings. It’s easy to do, and it is important to give thanks! Gratitude is a crucial part of our faith. As is recognising that we have more than the vast majority of people in the world, even if we don’t feel wealthy. Where I think we sometimes get into trouble is by claiming that’s God’s blessing for us…because then what does that say about those who have less? Why is 40% of the world’s population living on less than £4 per day…does that mean God isn’t blessing them? Why is it that who has blessings like these, and who doesn’t, often seems to line up with old colonial realities? Sometimes we forget that many of the blessings we enjoy have come at the expense of others, whose lives, land, resources, and livelihoods were often stolen, and even now are kept in debt by global superpowers who enjoy our comforts well-insulated from those who provide them. That forgetfulness and insulation then also allows us to overlook the ongoing disadvantaging of people — people who are made in God’s image, who are beloved, and yet are held back from enjoying the things we call blessings.

Solomon got into trouble when he amassed so much that he didn’t have to be among the people, and when he forgot his calling and the purpose of his gifts. The Queen of Sheba, even inadvertently, reminded him, and reminds us, of the truth: all these blessings are not for us, they’re so that we can share them with others, so that we can do justice and righteousness. Remember that when God called Abraham, he said “I will bless you, and all the nations of the earth will be blessed through you.” Here is an example of a foreign nation coming to see the goodness and love of God, perhaps even more clearly than Solomon himself did.

So what if we adjusted our understanding of “blessed” to be more about the gifts we have to do justice and love kindness, the gifts we have to bless others, rather than about the ways our life is comfortable or good or fun? And what if we decided not to engage with the world in a transaction, like these two monarchs, always seeking what we can gain from what we give, but rather to engage with the world from a position of wanting to be a blessing?

Perhaps the love of God would be more visible through us, and the kingdom of God more evident even here on earth.