Breakfast on the Beach

After these things Jesus showed himself again to the disciples by the Sea of Tiberias; and he showed himself in this way. Gathered there together were Simon Peter, Thomas called the Twin, Nathanael of Cana in Galilee, the sons of Zebedee, and two others of his disciples. Simon Peter said to them, ‘I am going fishing.’ They said to him, ‘We will go with you.’ They went out and got into the boat, but that night they caught nothing.

Just after daybreak, Jesus stood on the beach; but the disciples did not know that it was Jesus. Jesus said to them, ‘Children, you have no fish, have you?’ They answered him, ‘No.’ He said to them, ‘Cast the net to the right side of the boat, and you will find some.’ So they cast it, and now they were not able to haul it in because there were so many fish. That disciple whom Jesus loved said to Peter, ‘It is the Lord!’ When Simon Peter heard that it was the Lord, he put on some clothes, for he was naked, and jumped into the lake. But the other disciples came in the boat, dragging the net full of fish, for they were not far from the land, only about a hundred yards off.

When they had gone ashore, they saw a charcoal fire there, with fish on it, and bread. Jesus said to them, ‘Bring some of the fish that you have just caught.’ So Simon Peter went aboard and hauled the net ashore, full of large fish, a hundred and fifty-three of them; and though there were so many, the net was not torn. Jesus said to them, ‘Come and have breakfast.’ Now none of the disciples dared to ask him, ‘Who are you?’ because they knew it was the Lord. Jesus came and took the bread and gave it to them, and did the same with the fish. This was now the third time that Jesus appeared to the disciples after he was raised from the dead. 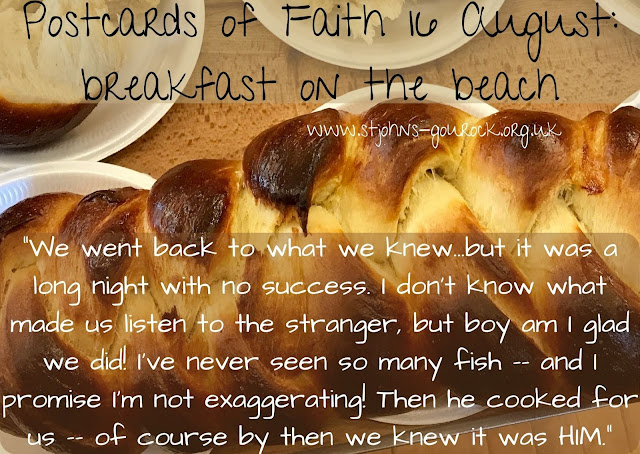 They went back to what they knew.

It’s hardly surprising, after the stress and upheaval and change they’d experienced, between those last few days in Jerusalem, and then those three days of grief, and then the wonder and uncertainty of resurrection…they needed some stability. They couldn’t stay in Jerusalem forever, it wasn’t their home, after all. So they went back to their seaside town, and tried to go back to their normal life.

It’s the thing many of us have been longing for, for months now — to get back to normal. We are definitely not the first to have that desire! Peter, Thomas, Nathanael, and the others wanted to get back to normal too. Except that the normal they used to know, before Jesus, wasn’t really there anymore. How could they simply return to the lives they used to live — having the same conversations with all the same people who had known them their whole lives, doing the same day-in-day-out work of a peasant community in an occupied land? They had seen incredible things, met hundreds of people…and they’d been changed, at least on the inside. While their world seemed the same as it ever was, the reality is that they were different…and the world was different too, now that resurrection had happened, though people didn’t see how just yet.

They made a valiant effort though. They went back to what they knew. They put out from the shore, they let down the nets, just the same way they’d always done it.

But this time, nothing happened.

Despite doing everything the usual way, something about it wasn’t the same.

In the morning, when they heard the stranger calling from the beach, some part of them must have thought he was crazy, even as another part of them recognised something in his instructions. Soon their net was overflowing with an abundance that could only come from the One who promised Abundant Life — the One who had extravagantly fed the crowds of thousands with only a few loaves and fish, the One who had turned hundreds of gallons of water into the best vintage of wine.

The first to realise the truth was the one who had been closest to Jesus during his life — the disciple whom he loved, usually thought to be John. He had been close enough to hear Jesus’ heart at the Last Supper, and even from the boat out on the lake he could hear it still. And then Peter did one of his typical impetuous Peter things — he put ON his clothes and jumped into the water to swim to shore, leaving the others to struggle with the hundreds of fish and the boat! Only after he saw Jesus up close, and after Jesus reminded him to go help did he then rush back and, apparently, singlehandedly, Hulk-style drag the net ashore, teeming with 153 fish. It’s an oddly specific number — not the usual vague, exaggerated style that we hear from fishermen about how it was THIS BIG, their hands getting wider apart even as they speak — and some scholars think it represents all the known countries at the time, a reminder that Jesus’ abundant life reaches to the whole world.

As they sat around the fire, drying out their clothes, exhausted from a long night yet exhilarated by the turnaround of the morning, Jesus did something he had done hundreds of times before: he broke bread and gave it to them. And they didn’t need to ask who it was, because in that moment they knew for certain.

When they get up from this table, Jesus will give them instructions to pass it on, pay it forward: feed my sheep. In other words, take this moment and let it become your new normal, your formative experience that you keep going back to.

The ways we used to know will not be able to sustain us in the new world that is ahead of us. We will need to learn anew the heart of the matter, be formed in that new way, and live from that core story. That breakfast on the beach was not just a welcome respite from a bad night at work, it was a reminder of their life with Christ, that was to continue even when they weren’t physically at the same table.

I think of how, when I was growing up, my family ate dinner together every night. Whatever we might have been eating, whatever we might have talked about, it was probably the most formative aspect of my childhood. It’s where we came together, where our family values were communicated and reinforced, where stories were shared. Even though I no longer sit at the same physical table as my family, who I am today was shaped by those hundreds of family dinners.

The same is true for us as Christians, members of Christ’s family. We sit at the family table, we share the bread and wine, and it forms us, makes us who we are meant to be. It’s where we learn the stories of God doing a new thing among us, and the values of hospitality and justice and love and abundance…and that’s what we draw on when the world is tough and we aren’t sure what to do, and the temptation of going back to what we know is strong.

They went back to what they thought they knew…but Jesus was calling them to a new normal, formed not by their old habits but by his Way, Truth, and Life. That continues to be true, even when we aren’t currently sitting at the same physical table — we will need the new habits of a life formed according to Christ, not the old habits we look back on so fondly…especially when those old habits were not good news for everyone.

For all who are tempted to think this is only about church life in a post-lockdown world, it’s much bigger than that. Jesus reaches into every aspect of our lives, not just our Sunday-morning hour. That time around the table is meant to form us into new habits that stop us going back to the old ways we know when it comes to politics, racism, and sexism, how we spend our money, how we relate to each other, what and who we value, how we spend our time, what we eat and wear, how we talk to each other online and in person, the work we do, which jokes we’ll call out as harmful rather than funny…and also, yes, what it means to be church, what it means to be part of a community, going forward.

Jesus didn’t only call those disciples to experience worship differently, or to teach Sunday school differently, he called them out of their old ways of work and earning, out of their old ways of relating to each other and to the people in their community, out of their old ways of thinking about themselves and the world. This is a big journey we are on. We will need to be nourished by those formative days around the table, hearing the stories and learning the values and carrying them forward into every place we go. That’s what it means to be family with the One who promised Abundant Life: just as we have been nourished by it, we are sent out to ensure others have it as well — and especially those who have been denied, excluded, left behind, or poisoned instead. Feed my sheep, Jesus said, just as you have been fed.