come and see -- a sermon on Jesus and his first disciples

The next day John was standing again with two of his disciples. When he saw Jesus walking along he said, “Look! The Lamb of God!” The two disciples heard what he said, and they followed Jesus.

When Jesus turned and saw them following, he asked, “What are you looking for?”

They said, “Rabbi (which is translated Teacher), where are you staying?”

He replied, “Come and see.” So they went and saw where he was staying, and they remained with him that day. It was about four o’clock in the afternoon.

One of the two disciples who heard what John said and followed Jesus was Andrew, the brother of Simon Peter. He first found his own brother Simon and said to him, “We have found the Messiah” (which is translated Christ ). He led him to Jesus.

Jesus looked at him and said, “You are Simon, son of John. You will be called Cephas” (which is translated Peter).

The next day Jesus wanted to go into Galilee, and he found Philip. Jesus said to him, “Follow me.” Philip was from Bethsaida, the hometown of Andrew and Peter.

Philip found Nathanael and said to him, “We have found the one Moses wrote about in the Law and the Prophets: Jesus, Joseph’s son, from Nazareth.”

Nathanael responded, “Can anything from Nazareth be good?” 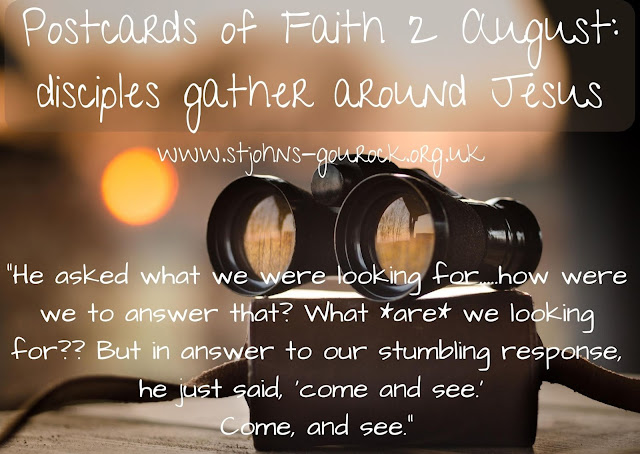 I love picturing this first scene like a film — imagine: John the Baptist and some of his disciples are standing around, loitering on the corner. He sees Jesus and points (he wouldn’t be the subtle type to just nod his head and say “don’t look now, but here comes the lamb of God”, he would definitely point). And the two disciples walk away from John, leaving him standing on the corner alone. They follow Jesus at a discreet distance, perhaps, but he senses that he’s being followed and turns around to confront them, and when he asks what they’re looking for, I picture them as a bit tongue-tied. What are they looking for? Do they even know?

We know that John had been teaching that he wasn’t The One, that he was preparing the way for one who would come after him and be greater than he could even imagine. So when he finally pointed to Jesus in the flesh, perhaps it’s no surprise that Andrew and the other disciple with him simply dropped everything and changed schools without a blink. Or perhaps there was a bit more thought involved — I think of how difficult it was to leave behind my hairdresser and my therapist when I was moving here, and how much more difficult it would be to leave behind a spiritual teacher like John the Baptist! Yet off they went. But when Jesus turned around, they suddenly realised there was more to this than they’d thought.

What are you looking for?

When we come to Jesus, what are we looking for?

Are we looking for someone who will comfort us through difficult times?

Someone who will ease our discomfort at changes in the world by offering us a bubble of pious words and pictures?

Someone who looks like us and will help us maintain the status quo?

Are we looking for answers to difficult 21st century questions?

Are we looking for 5 easy steps to a good life?

Are we looking for hope in the midst of the despair of this world?

Are we looking for a friend who will go along with our ideas, or one who will challenge us to be our best selves?

Are we looking for God, creator, redeemer, and sustainer of the universe, in the flesh beside us?

Are we looking for someone who will lead us through green pastures and through the valley off the shadow of death, who will invite us to a feast in the presence of our enemies?

Someone who will open our eyes to see the truth of this world, and who won’t let us shy away from big challenges?

Someone who will steer our steps toward the people who are poor, ill, outcast, foreign, and undesirable? Or who will call us to change the systems that keep people poor, marginalised, and seen as less-than?

Are we looking to have our hearts broken when God’s heart breaks?

Are we looking for love so overwhelming that it spills over to people who don’t deserve it?

What are you looking for?

Andrew and his friend don’t appear to have an answer, so they simply indicate that they want to be close to Jesus — except they do it in the creepiest way possible. Having followed him around town and gotten caught, they then just say “where are you staying?” Luckily, Jesus knows their hearts. He knows they aren’t stalkers or celebrity-obsessed paparazzi. He knows that they are seeking something they don’t yet know how to articulate, and that the best way to find it is to stay close to him. So he issues them an invitation: Come and see.

And those two go, and they see, and then they find their siblings and friends and give them the same invitation: come and see.

Notice there are no answers in the story, no pithy sayings, no clarifying of positions on political issues yet. So far, we’ve got Jesus inviting disciples, and then those disciples inviting more. And for thousands of years, that’s exactly how it has worked. We come to Jesus and see, and then we invite others to come and see with us.

Whatever we think we’re looking for, the answer will be the same: come close to Jesus, and see what he is doing and saying, how he is living and being, where he is going, who he is spending time with, and that will change us, and it will change the world.

When we come close to Jesus, we’ll discover there’s no room for the casual racism that enables a question like “can anything good come from Nazareth?” Those dividing walls are torn down and the kingdom of God encompassing all can be seen, when we join Nathanael in rooting out those internalised prejudices.

When we come close to Jesus, we’ll see that the way our thoughts become actions is more important than just believing the right things.

When we come close to Jesus, we’ll learn that love isn’t just a feeling, and it isn’t just for the people we like. It’s an action that has to be chosen every day, in every situation, toward everyone — because that is how the world will know that we are his followers, by our love.

When we come close to Jesus, what we see will make us want to invite others to come as well, because there is no one else in whom abundant life can be found, and surely we will want to share that when we have found it.

So hear the invitation again today: come and see.