I was in my 30s the first time a friend moved away, rather than me being the one who moved away. I had moved a lot in my life (in fact I often use the number of addresses I've had as one of the things I say whenever I play "two truths and a lie"), and apparently had lived 30 years without ever registering that I was always the one leaving.

It was a very strange and surreal feeling, when friends decided to move -- and they only moved a several-hours-drive away, not even super ridiculously far. We still saw each other, just obviously less frequently than before. But going from a couple of times a week to maybe once every 6 weeks was a shock to the system.

A few years later, friends moved much much farther away, like practically into never-see-you-again territory, and I'm not sure I'm over that yet, honestly.

It's a weird thing, to always have been the one that left and then suddenly be the one left behind when people went on to new adventures. Even as I type that, it feels so silly, and at the same time weird to think about the two different forms of the word "left" in the one sentence. Perhaps that was part of the issue.

I don't know if I can articulate having learned anything from that, other than to notice that it was a new experience and to finally feel what others must have felt all the times we were the ones to move.

Then, of course, I made a huge move, and even already here I've been the one to go away and leave behind friends (friends made during my placement in Edinburgh...which feels a million miles away during a pandemic, even though it's only 2 hours on a train!). I am hoping to be in this place for a long time, but this is also a place where not many people seem to move away, so hopefully we can be together here for a good long while. Because I don't like goodbyes, really.


Together, by Carrie Williams Clifford (2 of 4 stanzas -- click through for the rest!)

O, come, Love, let us take a walk,
Down the Way-of-Life together;
Storms may come, but what care we,
If be fair or foul the weather.
When the sky overhead is blue,
Balmy, scented winds will after
Us, adown the valley blow
Haunting echoes of our laughter. 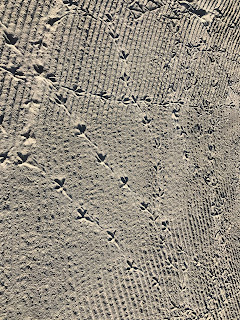