God goes where the people are -- a sermon on David's house

God goes where the people are

Last week we heard about Hannah praying for a son, and then dedicating Samuel to God’s service in the Temple at Shiloh. Samuel grew up and was called by God to guide the people in their faithfulness. Eventually, though, the people decided that they needed to have a human king, so they could be like other nations. Samuel tried to teach them that having a human king rather than simply following God as their king would lead to strife and pain, but they insisted. God led Samuel to anoint Saul as the first king, but then Saul made some choices that led to the very strife that Samuel had warned about, as he overstepped his bounds and took power that belonged to God. So God called Samuel to anoint David as king, while he was still just a child, and Saul still reigned. When David eventually took the throne, after much violence and confusion, he did three things to mark the new era: he married Saul’s daughter, cementing his legitimacy; he built a new capital city, Jerusalem, in between the northern and southern territories, to unite the kingdom; and he built a royal palace in the capital so everyone could see the new stability and power of the king. That is where we pick up the story today, in 2nd Samuel chapter 7, reading verses 1-17, from the New International Version.

7 After the king was settled in his palace and the Lord had given him rest from all his enemies around him, 2 he said to Nathan the prophet, ‘Here I am, living in a house of cedar, while the ark of God remains in a tent.’

3 Nathan replied to the king, ‘Whatever you have in mind, go ahead and do it, for the Lord is with you.’

4 But that night the word of the Lord came to Nathan, saying:

5 ‘Go and tell my servant David, “This is what the Lord says: are you the one to build me a house to dwell in? 6 I have not dwelt in a house from the day I brought the Israelites up out of Egypt to this day. I have been moving from place to place with a tent as my dwelling. 7 Wherever I have moved with all the Israelites, did I ever say to any of their rulers whom I commanded to shepherd my people Israel, ‘Why have you not built me a house of cedar?’”

8 ‘Now then, tell my servant David, “This is what the Lord Almighty says: I took you from the pasture, from tending the flock, and appointed you ruler over my people Israel. 9 I have been with you wherever you have gone, and I have cut off all your enemies from before you. Now I will make your name great, like the names of the greatest men on earth. 10 And I will provide a place for my people Israel and will plant them so that they can have a home of their own and no longer be disturbed. Wicked people shall not oppress them any more, as they did at the beginning 11 and have done ever since the time I appointed leaders over my people Israel. I will also give you rest from all your enemies.

‘“The Lord declares to you that the Lord himself will establish a house for you: 12 when your days are over and you rest with your ancestors, I will raise up your offspring to succeed you, your own flesh and blood, and I will establish his kingdom. 13 He is the one who will build a house for my Name, and I will establish the throne of his kingdom for ever. 14 I will be his father, and he shall be my son. When he does wrong, I will punish him with a rod wielded by men, with floggings inflicted by human hands. 15 But my love will never be taken away from him, as I took it away from Saul, whom I removed from before you. 16 Your house and your kingdom shall endure for ever before me; your throne shall be established for ever.”’

17 Nathan reported to David all the words of this entire revelation. 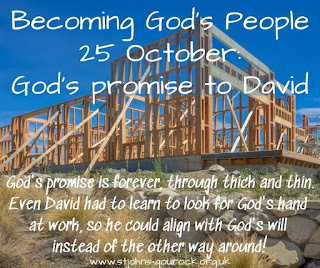 It was my birthday this week, and all day long my doorbell was ringing with people coming to wish me a happy birthday, with gifts and cards and 2-metre-distanced-doorway-chats. It was lovely to feel so special and cared for! I ended the day by opening everything, and it was amazing what fabulous gift-givers people are — every glittery card and every gift revealed that they had put thought into choosing something I would enjoy and that reflected my interests. I am so grateful to have such wonderful friends!

King David was, perhaps, a less thoughtful gift giver than the wonderful people who came to my door this week.

David was grateful for all that he had. He looked around his large fancy house, and gave thanks for the stability and rest that it symbolised, especially after so many years of hiding in caves or sleeping in a tent on the battlefield. That was what he wanted: stability, for himself and for his kingdom. And God gave that to him. So David decided he wanted to give God a gift too — or perhaps he thought he needed to do something for God in return. Either way, his gift-giving skills were not quite on point. He decided to give God the thing that he, David, most wanted, rather than trying to discern what it was that God would want. Since he wanted stability, and that was symbolised by his solidly built, well-appointed house, it made sense that he should build one for God too. Surely God would also desire stability, and would like a sturdy place to settle down?

David seems to have forgotten what God was actually like, and what God wants from us as followers. So that evening, God spoke to the prophet Nathan, so that he could teach David how to listen rather than presume to know God’s mind without actually asking or listening for God’s call.

The thing is, God is the one who did things for David. Look at how many times God says “I did this…I will do this…” when reminding David of his life story. Eighteen times in just eight verses! David’s life story is really a story about God’s activity in every sphere, calling and equipping and caring and providing.

Throughout all of this, and throughout all of the history of God’s people, there was never a time when God asked for a house. Indeed, the house of God was intentionally mobile, a tent that could be moved wherever the people went. God goes where the people are, and provides a place for them — not the other way around. God has never been confined to just one place, and certainly not to a grand building that could easily be mistaken as celebrating the glory of the king at least as much as the glory of God.

How easy it is to fall into the trap of assuming that God wants what we want! And then to confine God to that, rather than accepting God’s freedom to move about, to be anywhere and everywhere, even in the places and among the people that we would prefer to stay away from ourselves. It would be easier if there was a place we could expect God to be…and then if God just stayed there, nice and safe. It would provide even more stability for David if he could be seen to have God’s house beside his own, after all…especially since then, he could control who had access to God’s house.

But God goes where the people are.

What good news that is! Especially now, when we are each in our own places. We are not separated from God, even as we try to keep a safe distance from people outside our households. Whether we gather in person or not, God goes where the people are, and acts in and through our lives right where we are. And then God asks us to be good givers — to take the time to discover what God wants, and to align with God’s will; to allow God to be God and for us to be followers of God’s way rather than insisting God follow our way.

God is aware that we will not always succeed in this. When speaking to Nathan, God even says that David’s descendants will do wrong sometimes, and they will suffer consequences. But those consequences should not be interpreted to mean that God has given up on them. God’s love is forever, unconditional. This is a long-term, permanent relationship — more permanent than anything else in the world, in fact. There may be difficulties along the way, but those difficulties will never be a relationship deal-breaker. Wherever we wander, God goes where the people are.

So then how do we discern God’s desire, and align ourselves with God’s will? How do we become the kind of gift-giver who thoughtfully does exactly what God wants to receive?

In many places today, the last Sunday in October, is celebrated as Reformation Sunday — the day we remember that on the 31st of October, 1517, Martin Luther publicised the discussions he wanted to have about the way the Church understood and taught about God. One of the major tenets of the Reformation was that people ought to be able to access the scriptures in their own native languages, not just hear them read in Latin by the priest. The idea that people would be able to read scripture for themselves was radical and threatening. People lost their lives and livelihoods to make it possible for us to know God’s word for ourselves. When the Reformation came to Scotland later in the 1500s, this insistence on being able to read the word is what led to the system of parish schools and a rapid increase in literacy, because we believed people can and should learn the scripture by reading it.

So on Reformation Sunday especially, I pray we will honour that gift given to us by our ancestors in the faith, by opening up the book, however dusty it might be on the shelf, and listening to what God is saying to us today through the word. Knowing how God has been faithful to our forebears, reading about what God has done in the past and how God has called people, journeyed with them, and what God asked for them to do, can give us a sense of what God is like and how we might apply those same lessons now. Discerning what God wants starts with getting to know God better, just like any friendship does.

David had to be reminded what God is like, and what God had done. We too often need reminding! Jesus knew that too — in John’s gospel, he promised us that he was sending the Holy Spirit “to remind you of all I have taught you.” The Spirit continues to teach us the truth, to remind us of Jesus’ way, and to call us to a life in alignment with God’s will.

May we hear and respond in faith.