Beyond and Beneath -- a sermon on Jesus at Nazareth

Last week we heard about John the Baptist preaching at the Jordan River, and baptising people, including Jesus, who then heard God’s voice proclaiming him God’s beloved Son. After his baptism, the Holy Spirit led Jesus in the wilderness for 40 days, where he experienced several temptations — to turn a stone into bread, to worship Satan in exchange for the glory of the kingdoms of the world, and to demonstrate his specialness by throwing himself from the top of the Temple. Having resisted all these, he then returned home, where we pick up the story today in the gospel according to Luke, chapter 4, beginning at verse 14. I am reading from the New Revised Standard Version.

Then Jesus, filled with the power of the Spirit, returned to Galilee, and a report about him spread through all the surrounding country. He began to teach in their synagogues and was praised by everyone.

When he came to Nazareth, where he had been brought up, he went to the synagogue on the sabbath day, as was his custom. He stood up to read, and the scroll of the prophet Isaiah was given to him. He unrolled the scroll and found the place where it was written:

‘The Spirit of the Lord is upon me,

because he has anointed me

to bring good news to the poor.

He has sent me to proclaim release to the captives

and recovery of sight to the blind,

to let the oppressed go free,

to proclaim the year of the Lord’s favour.’

And he rolled up the scroll, gave it back to the attendant, and sat down. The eyes of all in the synagogue were fixed on him. Then he began to say to them, ‘Today this scripture has been fulfilled in your hearing.’ All spoke well of him and were amazed at the gracious words that came from his mouth. They said, ‘Is not this Joseph’s son?’ He said to them, ‘Doubtless you will quote to me this proverb, “Doctor, cure yourself!” And you will say, “Do here also in your home town the things that we have heard you did at Capernaum.”’ And he said, ‘Truly I tell you, no prophet is accepted in the prophet’s home town. But the truth is, there were many widows in Israel in the time of Elijah, when the heaven was shut up for three years and six months, and there was a severe famine over all the land; yet Elijah was sent to none of them except to a widow at Zarephath in Sidon. There were also many lepers in Israel in the time of the prophet Elisha, and none of them was cleansed except Naaman the Syrian.’ When they heard this, all in the synagogue were filled with rage. They got up, drove him out of the town, and led him to the brow of the hill on which their town was built, so that they might hurl him off the cliff. But he passed through the midst of them and went on his way. 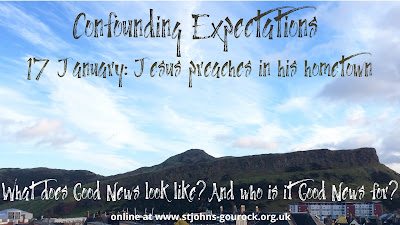 Can you imagine the scene that day in the synagogue? This hometown boy has been away for a few months, listening to John the Baptist and then going on that wilderness prayer retreat, and he’s been making his way home — they’re hearing glowing reports from every village along the way and can’t wait to welcome him back, to hear all about his experiences and what he’s learned about God and the scriptures, and to celebrate that one of their own is rising to prominence as a preacher.

New archaeological evidence suggests that Nazareth was a bigger town than previously thought, maybe having a thousand or so people. The scholars think that there may have been a number of priestly families living there, and that on the whole the town was more stringently devout than some other places — archaeologists have found evidence that they followed tighter rules and restrictions than some neighbouring towns did. If that’s the case, how much more proud would they be that this native son was becoming a teacher and healer, following in the footsteps of John the Baptist, encouraging people to repent and turn to God’s way? The buzz about Jesus was growing, people were talking about him at home, in the streets and marketplace, and in the synagogue.

His first weekend home, of course he was invited to the front to speak. It happens to everyone training for the ministry! Just come up and say a few words, we’re so proud and excited to hear from these young people who have grown up in our Sunday School classes, we just know they’re going to do great things and be a credit to us and all the time we invested in them.

Jesus stood and was handed the scroll for the week’s lectionary reading — Isaiah. Isaiah is a long scroll, 66 chapters, so unrolling it would take some time, carefully finding the spot for chapter 61, near the end, before reading out a passage we heard just a few weeks ago during Advent. All eyes were on him as he rolled and rolled, then found the right place, and finally read out: “The Spirit of the Lord is upon me, he has anointed me to bring good news to the poor.” Then when he finished reading, he rolled and rolled until the scroll was carefully put away. Only then did he start a sermon.

Already after the first sentence, people were thrilled. He spoke so well, especially for a workman’s son. They murmured to each other and swelled with pride for being the place that this great man came from, the neighbours who looked after him and changed his nappies, the friends who studied with him, the people who taught him and who bought their furnishings from his father — they knew him before he was famous, in fact it was probably their help in his upbringing that made him this way! They would definitely get a mention in his award speech.

And then Jesus kept talking. He didn’t stop where they were happy and leave them wanting more. He didn’t quit while he was ahead. He had read what was to become the mission statement of his own ministry, and now he was going to tell them what that meant in practice.

And the people of Nazareth, who were careful and observant about correctness and holiness and purity, who were priests and small business owners and tradesmen, were furious. They are not the poor, the captive, the blind, the outcast, or the oppressed. Or at least, they don’t see themselves that way, aside from the situation with the Romans. So what does that mean for them, and their expectations for how their hometown celebrity Jesus will treat them?

In essence, Jesus said to them: not everything is about you.

That doesn’t mean God doesn’t love you and care about everyone. It just means that God’s world does not necessarily revolve around me.

And Jesus’ mission was for those who never had their moment in the sun: those that the people of Nazareth assumed were beneath them or beyond their bounds. Too often, we expect that everything God says and does is for us — by which I mean the “us” that is in our comfortable circle. Us in our nation, or our language, or our skin colour, or our religion, or our socio-economic status. But if the way we interpret something is not good news to the poor, the captive, the blind, the outcast, and the oppressed, then it is not actually Jesus’ good news. It’s just our expectations, reinforced by some pretty words.

No wonder the people of Nazareth were furious enough to try to throw Jesus off a cliff. He pointed out their privileged position, and said his mission was to people who needed him more — and then gave examples that suggested that his work would challenge their position, hold them accountable to a vision of God’s kingdom that was more just than the world in which they lived. Their response suggests that they would prefer the status quo rather than the work of God as described by the prophets, or even by Jesus’ mother in her magnificat.

So what would be good news to the children who received such paltry food parcels for their lunches this week?

What would be good news to the person fleeing their home because they can no longer live in the midst of war or famine or abuse or lack of opportunity?

What would be good news to the immigrants who serve as carers, working for private companies or councils rather than the NHS, wondering about their immigration status and their place in the immunisation priorities, and paying for their own PPE from their minimum wage?

Jesus reads this passage from Isaiah, a passage about God’s kingdom being a kingdom of jubilee, of justice that creates equity, and then says it is fulfilled in him, this is his mission. In his person, in his very being, by his presence among us, these words become true in our present reality. Throughout Luke’s gospel we will see him bringing this about — he is anointed for this purpose, to make God’s kingdom visible here and now, and that will be good news for the poor, the captive, the blind, the outcast, and the oppressed. We may well join the people of Nazareth when we realise the good news is not targeted just to us — indeed, that it is actually targeted to “them.” But only when it’s good news for the least can it be true good news for the greatest. Anything else is just shallow empty words…or even idolatry, a god made in our own image. And the good news of Jesus Christ is so much more than that, so much deeper, so much wider. He challenges us to follow him beyond our comfort zone, so that all people, even “them,” can hear good news and experience God’s kingdom, here and now.