open -- a sermon on Luke 5, fishing for the first disciples

Last week we heard Jesus give his first sermon, in his hometown of Nazareth. It started well but by the end people were quite upset. He went on from there to Capernaum, where he was again teaching in the synagogue on the Sabbath when a demon who was possessing a man shouted out his identity for all to hear. Jesus cast out the demon and healed the man, and people began to talk about him even more than before. After synagogue, Jesus went to Simon’s house, where he healed Simon’s mother-in-law, and then once the sun went down and the Sabbath was over, the whole town came to the door to ask for healing. That night, Jesus went out and prayed, and decided it was time to go preach in new places, even as word about him was spreading. We pick up the story today in Luke chapter 5, beginning at verse 1. I am reading from the Common English Bible.

One day Jesus was standing beside Lake Gennesaret when the crowd pressed in around him to hear God’s word. Jesus saw two boats sitting by the lake. The fishermen had gone ashore and were washing their nets. Jesus boarded one of the boats, the one that belonged to Simon, then asked him to row out a little distance from the shore. Jesus sat down and taught the crowds from the boat. When he finished speaking to the crowds, he said to Simon, “Row out farther, into the deep water, and drop your nets for a catch.”

Simon replied, “Master, we’ve worked hard all night and caught nothing. But because you say so, I’ll drop the nets.”

So they dropped the nets and their catch was so huge that their nets were splitting. They signalled for their partners in the other boat to come and help them. They filled both boats so full that they were about to sink. When Simon Peter saw the catch, he fell at Jesus’ knees and said, “Leave me, Lord, for I’m a sinner!” Peter and those with him were overcome with amazement because of the number of fish they caught. James and John, Zebedee’s sons, were Simon’s partners and they were amazed too.

Jesus said to Simon, “Don’t be afraid. From now on, you will be fishing for people.” As soon as they brought the boats to the shore, they left everything and followed Jesus. 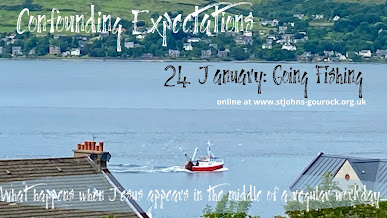 One day…just an ordinary work day like any other. Morning chores were in process, merchants were setting up their stalls, day labourers were congregating and waiting for work, children were running underfoot on their way to get water from the town well, fishwives were gathering up the night’s meagre catch to sell — not from Simon’s boats, though, since they had caught nothing — and fishermen were cleaning nets to prepare for the next night instead. Everyone else’s workday was gearing up, but theirs was winding down.

Jesus had been visiting synagogues in all the villages, but this was a work day, not a Sabbath day, so he was out doing what normal people did on an average weekday morning. Perhaps he was out waiting to buy fish beside the shore, or talking to day labourers, or waiting for the baker to get fresh loaves from the ovens. People recognised him though, and started to gather round, hoping to hear him say something profound. When the crowd got to be a bit too claustrophobic, he hopped into Simon Peter’s boat. Jesus clearly could not handle the boat himself, he asked Peter to push away from the shore — a task that actually would have required the crew of 4 or 5 men to stop their net-cleaning and get back into the boat.

Once Jesus finished everything he had to say that morning, he ask them to go out into the deep water and go fishing.

The deep water…where anything can happen. It’s away from the crowds, and it’s the most dangerous part of the lake, where you can’t see what’s down there and where squalls could rise quickly and without much warning. It was also the place where, at that time of day, there might be more fish than closer to the shore. Life and danger together summed up in one phrase: the deep water.

These men were tired, they’d worked all night…perhaps they didn’t even have the energy to resist their new friend who was brought up inland. Even though a tired crew out on the deep water was likely an extra layer of concern, they humoured him — “if you say so, I’ll drop the nets.” The nets they had just cleaned, for the record, as their last work task before finishing their shift. It’s like when the tables are wiped and the machine is cleaned and the floor is mopped and with one minute before closing time someone comes in and orders a cappuccino.

But they did it — they dropped the nets. And the result was so far beyond their imagining they didn’t even have time to think. Pretty soon they had so many fish that two boats were sinking — and each boat at the time could have safely held nearly half a ton of fish! With a literal ton of fish, they struggled — an exhausted crew working overtime on the biggest catch they’d ever experienced, they probably were barely even able to hum a sea shanty as they rowed their sinking boat to shore. Once they were safely on land, though, the truth hit: this was the best day in their small business owner lives! Nothing like this had ever happened before. Even after taxes, this was a huge windfall for them and their families.

Peter’s first reaction, though, was to worship. In awe, he sank to his knees and recognised that he was in the presence of something, someone, so great he could never deserve it. This man had power over the deeps, and though he wasn’t a fisherman he knew the fish better than anyone. They had experienced his teaching and healing but now they saw something else, something cosmic that could control creation.

All of them were overcome with amazement. Imagine realising that such power and holiness had left the sanctuary and the synagogue and come down to the shore in the midst of all the people and work and commerce, and plopped itself down in your business. That’s not how the world works! God is supposed to be safely in the holy places, not in the middle of the workweek, visiting our shops and offices and turning everything upside down!

It’s no wonder Jesus has to say “don’t be afraid.” Think of the other times human beings have encountered the presence of God — Isaiah in the temple seeing the hem of God’s robes and the seraphim singing Holy Holy Holy…the people at the foot of Mount Sinai, with the pillar of cloud and fire quaking with God’s voice…Samuel in the temple, uncertain where that voice is coming from…Elijah on the mountain hearing God in the silence…even when the people of God faced the moment with courage, they were nervous. Because meeting God is dangerous, for two reasons — first because human beings can’t handle or comprehend the fullness of God’s holiness, we’re made to be “a little lower” as the psalmist says. And second because all of these encounters end with God sending the people out to do something that they would likely not have chosen to do on their own. Isaiah and Samuel and Elijah all had to go proclaim a message that the kingdom would not want to hear.

What would come next, for these fishermen who understood they were experiencing something beyond them?

Jesus said: come with me to fish for people. And they left everything and followed him.

They left everything. Their boats. Their nets, which now needed to be re-washed and mended. A literal ton of fish, the catch of a lifetime. Their families and friends. The life they knew and were comfortable in, even though it was hard work. They left it all and followed Jesus. His invitation, to be close to that level of holiness and power and grace all the time, was more compelling than their social network, than their massive income boost, than their exhaustion at the end of the work day — more compelling than anything else.

So they left everything and followed him.

Whatever they expected that day, it wasn’t that. The crowd that pushed and pressed and begged to hear the word…the tired fishermen that humoured this itinerant preacher when he tried to tell them how to do their jobs…then found themselves overcome with wonder and amazement, falling on their knees and then getting up to follow. That was not how they thought their day was going to go when they got up that morning.

But when it happened, they were open to it. When their expectations were shattered and confounded, they adapted to the new situation. When God showed up, they recognised and responded.

It’s easy to get caught up in all the tasks of a day, and in what we think is and is not possible in our situation, and our own sense of our expertise compared to others. Simon Peter and his business partners and their crew could have said “it’s the end of our shift, we’re done for the day” and just laid their nets out to dry and clocked off. They could have said “we’re professional fishermen telling you that there are no fish to catch today” and rowed back to shore. But they had enough space in their spirits to recognise when something divine happened, even unexpectedly in the middle of their everyday life.

Wherever we find ourselves — at home whiling away hours, or working more than ever before without the usual boundaries between work and home; managing home learning, or never getting even a moment’s break from our family members; walking the dog half a dozen times a day for an excuse to go out, or relishing the time to get a break from the hectic pace — what would happen if God turned up? Can we make space within our minds and hearts for God to do something…and then to leave what we know and follow him?