Present Tense -- a sermon on Luke 6

Last week we heard about Jesus teaching from Simon Peter’s boat, and then miraculously guiding him and his business partners through the largest catch of fish anyone on the Sea of Galilee had ever seen. Once they got the fish to shore, Jesus called them to follow him. Jesus and his new disciples then went throughout the towns of Galilee, and Jesus healed people in ways that began to make other people, including religious leaders, suspicious — including by touching a man with leprosy, and by forgiving sins before telling a paralysed man to get up and walk. Then Jesus called another disciple, Levi, who was a tax collector, and went to his house for dinner, causing yet more scandal among the other teachers and leaders — and causing consternation when he tried to teach them that new wine and old wineskins don’t mix well.

We pick up the story today in the gospel according to Luke, chapter 6, verses 1-16. I am reading from the New Revised Standard Version.

One sabbath while Jesus was going through the cornfields, his disciples plucked some heads of grain, rubbed them in their hands, and ate them. But some of the Pharisees said, ‘Why are you doing what is not lawful on the sabbath?’ Jesus answered, ‘Have you not read what David did when he and his companions were hungry? He entered the house of God and took and ate the bread of the Presence, which it is not lawful for any but the priests to eat, and gave some to his companions?’ Then he said to them, ‘The Son of Man is lord of the sabbath.’

On another sabbath he entered the synagogue and taught, and there was a man there whose right hand was withered. The scribes and the Pharisees watched him to see whether he would cure on the sabbath, so that they might find an accusation against him. Even though he knew what they were thinking, he said to the man who had the withered hand, ‘Come and stand here.’ He got up and stood there. Then Jesus said to them, ‘I ask you, is it lawful to do good or to do harm on the sabbath, to save life or to destroy it?’ After looking around at all of them, he said to him, ‘Stretch out your hand.’ He did so, and his hand was restored. But they were filled with fury and discussed with one another what they might do to Jesus.

Now during those days he went out to the mountain to pray; and he spent the night in prayer to God. And when day came, he called his disciples and chose twelve of them, whom he also named apostles: Simon, whom he named Peter, and his brother Andrew, and James, and John, and Philip, and Bartholomew, and Matthew, and Thomas, and James son of Alphaeus, and Simon, who was called the Zealot, and Judas son of James, and Judas Iscariot, who became a traitor. 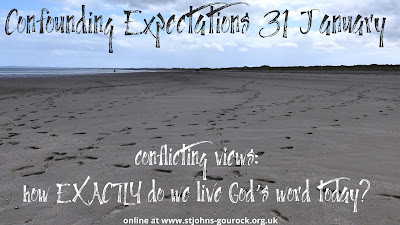 These are the kinds of stories that many people stereotypically associate with Jesus — conflict with the Pharisees over their understanding of God’s law. Too often, our interpretation of these stories leans toward anti-semitism, as we forget that Jesus was Jewish and that in many ways these disputes were a family argument about tradition. When we read about the arguments, we need to remember that everyone back then was doing the same thing we all are doing now: trying to determine how to put God’s word into practice in everyday life, and they didn’t always agree about the best way to do that.

What they did agree on was that it was important, and that the community needed to hold everyone accountable to living up to God’s call. There was a sense that each person’s choices had an impact on the whole community, or even the whole nation. They were bound together and what one did affected them all.

So when it looked as if Jesus and his disciples were flouting the sabbath rules by harvesting and processing grain on a day when you weren’t supposed to do any work, some of the Pharisees had to speak up.

It seems as if the owner of the field had followed the law, in that he left he edges of the field unharvested so that those in need would be able to harvest some and so not go hungry. But for a person who was not in immediate danger of starvation to do that harvesting on the Sabbath was a no-no. Naturally some Pharisees were concerned about the slippery slope — if you can harvest and shuck a quick snack on the sabbath, then what else can you do? But they were also concerned about divine consequences. They prided themselves on knowing their story as God’s chosen people, and that story included consequences that still felt like yesterday, though it was hundreds of years ago.

It’s that same concern they have in mind when they’re at synagogue another week. There’s a member with a disability — notice the text doesn’t tell us anything about him and doesn’t say it was unusual for him to be there. He’s one among them, a part of the congregation. Yet his disability was the first thing some of the scribes and pharisees thought about when they saw Jesus make his way down the aisle. It betrays the probably subconscious truth that they didn’t think of him as “George who sits halfway back, next to Sue, he works at the shop.” They thought of him as “the man who has something wrong with him.” So even though he hadn’t come specifically looking for Jesus, and he didn’t ask for anything — he was just in his usual pew like any other Saturday morning — when his fellow members saw Jesus, their first thought was to keep an eye out and see if Jesus was going to do something about it so they could get a good argument.

When Luke tells us that Jesus knew what they were thinking, I always wonder if he simply means that Jesus could tell they were looking for a fight, or if he means that Jesus could tell that they thought of their neighbour as a condition to be cured rather than as a person. The way Jesus asked them “is it lawful to do good on the Sabbath” and then asked the man to hold up his hand — notice that Jesus didn’t touch him, didn’t say anything to him, didn’t do anything you might expect for a healing. It’s almost as if it happened while he was talking to those people who could see nothing but the hand, instead of the living, breathing, beloved person made in God’s image.

No wonder they were furious. Jesus had shown them up and brought their secret thoughts into the open, while doing something they were fairly certain he should not do… but in a way that meant they couldn’t pin down exactly what was wrong. Of course you can do good on the Sabbath, right? It’s always been a clear Jewish teaching, from the earliest days of Torah interpretation. But where is the line between doing “good” and doing “work”? It didn’t fit into their telling of God’s story.

Back in the fields, Jesus had referenced a pretty obscure moment in the life of David. He talked about a time, after David had been anointed by Samuel but while Saul was still king. David and his friends were fleeing from Saul’s rage, and they came to a holy place where they allowed the priests to believe they were on official king’s business. They convinced the priests that they had kept all the holiness rules and so should be allowed to eat the bread, since there was nothing else available. In that moment, from God’s perspective David was king and so he was, technically, anointed and on the king’s business. The priests didn’t know that, though. Their understanding of the story had not yet caught up to the changed reality of the world around them.

Isn’t that often what happens to us? The ways we tell God’s story sometimes don’t keep up with the reality of what God is up to, and we get caught in old ways that no longer meet the needs around us. Some of the Pharisees were having trouble seeing that Jesus was a game-changer, that he brought God’s story into the present tense rather than always being something from the past that they needed to figure out. Because discerning how to live God’s word in our own lives, here and now, is important. But we can’t do it if we think the story is all in the past. God is still writing the story all around us and within us and through us, if only we will pay attention to the true reality of God’s kingdom rather than simply the assumptions we have made about “the way things are.”

How do we, as a community, figure out what faithfulness means in our modern lives? What does God’s word have to do with real situations, not just long-ago far-away ones? And how does our responsibility to each other look now that we may not be arguing about what counts as work on the Sabbath, but instead about what is right to do or not do in the midst of a pandemic?

The question about what one could do on the Sabbath wasn’t about what was good or even felt important for the person who was doing it. It was about what was good for the whole community, and the impact that one person’s actions would have on the whole. Isn’t that the same question we are asking right now? Not just “can I do what I want” but “what affect will my choice have on others?” It’s the question for things that want to be open, but the impact on the whole community needs to outweigh their desire. It's the question for the gatherings we wish we could have, and the holidays we wish we could book, and so much more. And we have seen the devastation that comes to the whole when we act as if our one area or sector or day is different, so it makes sense that we, as a community, would need these same kinds of conversations the Pharisees were having with Jesus, holding each other accountable to the common good. And hopefully we will come down where Jesus does, as he challenges the old interpretations of the story in light of new reality…can we challenge the old story we have told about economics, politics, social life, and what is essential? And then join Jesus on the side of doing good even if it isn’t what we would prefer, recognising and caring for the full humanity and value of others even if it’s not convenient for us, and putting our feelings of compassion for others into actions of mercy that offer abundant life for all.