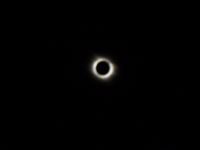 Tuesday evening, Jason and I headed to one of Cairo's bus stations for an 11.30pm bus to Sallum (pronounced "saloom"), a town on the Mediterranean coast and the Egyptian/Libyan border. The bus ride was about 9 hours, and it was neither the most comfortable nor the most uncomfortable mode of transportation.

We arrived in Sallum and were greeted with the news that we would be required to pay 100 Egyptian pounds to go through the gates of the city to watch the eclipse. Well, of course we were not about to do that--since we could watch the exact same eclipse outside the gates of the city for free! However, we had to go into the city to get bus tickets out. Were we going to have to pay 100 pounds just to leave the city? An Egyptian woman whirled around on us to say "this is our country and you have to pay for it!!!!!!!!!!" I really really wish I had been quick enough to say "actually, my tax dollars fund your country, including the road you came here on" but I wasn't. Instead what happened is that the woman found out that Egyptians too were being required to pay 100 pounds to get in the city gates. At that point they were all really angry and eventually we all got in for free. ilhamdulillah!!!!

We went into the town and found the bus station (and also found out that we can only buy bus tickets half an hour before the bus leaves....ah, Egypt). Then we headed out to the beach and set up camp, as it were. Me, Jason, a British guy, an Irish guy, two German girls, and hundreds of Egyptian men. No Egyptian women, just men. Soon we had quite a crowd of men, in fact. Some had the ubiquitous camera phone. ugh. most were staring. some were making comments. All were getting closer and closer and closer. So, I did a little freaking out. I shouted at them, I demanded a phone from one of them and ordered them to stop taking pictures, I pushed and shoved. They went away. About half an hour later, we had another crowd, with the same problem. This time Jason took away the camera phone. He said something to the men. One of the men called him "wehesh" (bad). I definitely lost it--I screamed and I pushed them and punched them in the chest and arms and they left. After a while, a new crowd. Repeat.

In between all of this, we were keeping tabs on the moon's progress. We were near someone who had set up a telescope to project on a piece of paper, so we could easily watch. We also made little spaces with our fingers so we could look at the shape on the sand. And, of course, Jason had is sun-watching tube.

Another crowd had gathered around us but it was getting very dim...we could see the shadow of the moon progressing across the sky and the land....I started to hum the Cat Stevens song "Moon Shadow" (lol)....it began to get chilly....the horizon looked like sunset with orange and pink and blue....soon we saw Venus, and then some stars...and then, all of a sudden, it was dark. And I mean DARK. It was cold, it was full on night, and we could look straight at the sun. It looked like a black hole had appeared in the middle of it! There was just a white ring around the blackest black disk I have ever seen. The men on the beach started shouting "allah akbar, allah akbar!!!" over and over. (God is the greatest/biggest.) We were all completely in awe--frantically taking pictures, trying to take it in, and generally revelling in the experience of midnight at midday. It was the most amazing thing I have ever seen.

In four minutes and a few seconds, it was over. The moon moved a bit, a sliver of light came through and then it was like sunrise, only faster. The men were shouting "allah akbar!" again. we couldn't look anymore, because the brilliant light (and its UV rays) would severely damage our eyes, what with our pupils being dilated from the dark and all. And then it was light, and off we went.

We had been planning to go on to Siwa Oasis afterward...until we found out that the hotels were full and that they were expecting up to 10,000 people in the Oasis after the eclipse. I was not feeling up to another crowds-of-egyptians (or really, crowds in general) experience after spending several hours fending off Egyptian men on the beach in Sallum, so instead we grabbed the bus to Alexandria (about 8 hours) and went to visit the YAVs who live there. We spent a wonderful two days walking on the Mediterranean, sleeping in, hanging out with the Jennifers, and eating at the Chinese restauarants of two major hotels. And then, Friday night, we were on a train back to Cairo....and that was that.

more photos are on the yahoo photos page. enjoy. 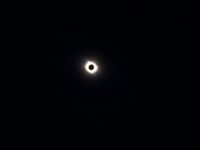