Last weekend (ten days ago now), our YAV group was all together again...this time for our "March Retreat"--which happened in the form of a trip to El-Minya, a city in middle-upper Egypt. We went to the train station in Cairo really really early in the morning. We rode the train for about 3-1/2 hours. We arrived in Minya where it was nice and warm and sunny, and were met by our two fellow YAVs who are placed up there....and a nice complement of military and police, and then we were off!

We were whisked out to a village with a very long name, where we were ushered into a large room and introduced to the mayor of the village. We drank tea, hung out, talked about (and amongst) ourselves, and were well received by said mayor AND the local Habitat committee. It was a nice way to begin! Then we headed to the Evangelical church where we had lunch in a place that looked like a fellowship hall but was apparently often used for "meetings" (ie worship). It was a meatified boxed lunch with chunks, pieces, and balls of meat, along with some bread and tahina (hummus). Eric saved the day by giving me his bread and tahina, and I scrounged up some more bread from Jason and Jennifer too, making for a nice bready lunch for me. And then we were really off and running!

Our assignments were to roof or paint. Naturally I asked for painting--no one wants me putting a roof on their house. Aside from the insurance liability (not an issue in Egypt!), it probably wouldn't last long if I did it. Ask my grandparents sometime about me and hammering nails, and you'll understand. SO: Jen and I headed out to a house (Jason was not feeling well and was going to join us after a little while). There we discovered that they weren't ready for paint. We were going to spackle instead. Now, I don't know what I thought spackling was, but it wasn't this. I had this impression of filling holes or something. Instead we were asked to basically cement over the mud brick walls of the room.

When I say "mud brick" I mean mud brick. Like made-by-the-Hebrews-of-the-Old-Testament mud brick. I could see the straw. Touching one basically made it crumble under my fingers.

And we were supposed to take a cement mixture and somehow throw it onto these walls (without them falling down) and then smooth it out.

Jen and I attempted this, but found that the cement ended up on the dirt floor instead. And not just a few drops here and there. I mean the entire blob of cement that was on the pallet ended up on the floor. There was a huge crowd of Egyptian men standing around, including the guy who had done the other wall, and they were laughing and smirking and saying things we didn't understand. Thankfully, after a few minutes of us wondering how on earth we were going to do this, some Habitat personnel (who speak arabic) arrived. We told them this was basically hopeless and that maybe it would be better, go quicker, and last longer if the master spackler did that part and we just mixed the cement and scooped it up for him. They agreed, especially after watching us for about a nano second.

So, Jen and I learned how to mix cement. We learned to put two scoops on the pallette and hand it to the guy who did the "real" work. We made a little system--one of us would scoop and the other would hand the man the full pallet while taking the empty one and handing it to the scooper. When one got tired of the job, we switched. This was a wonderful arrangement and the wall was coming on very nicely! 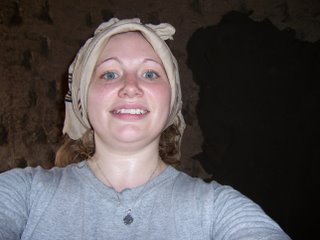 But we were hot and sticky and our hair was flying around...so a very lovely woman came in with two head scarves, which she tied up for us so that cement wouldn't get in our hair and so it wouldn't fly all around. We were stunning in these, let me tell you!

At this point Jason arrived and our assembly line became three people long, which made it a little more difficult. We ran out of cement and had to take a long, long, long tea break while more powder was brought and while some "strong men" mixed it with the water and gypsum for us. The women and children came up, and we took photos, talked in broken Arabic...and I also found out that the whole neighborhood was outside! I looked out the window and everyone was in the street looking up! 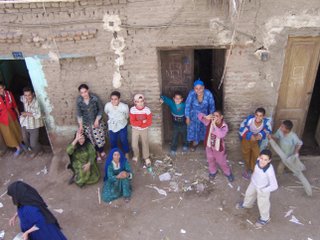 We had nearly finished our whole wall, but not quite, when the Habitat people (and the other spackling-not-painting crew) arrived to retrieve us at 4. We boarded the bus and headed back into Minya. On the way we saw--da da da daaaa!--water buffalo! I have been wanting a photo of a water buffalo since we got here. So cool. I got this photo from the moving bus! Awesome. 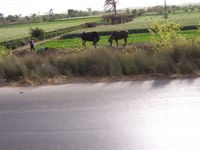 We got back to the Cleopatra Hotel, where we showered and rested up before dinner. Jen and I decided to go out for a little walk before dinner, just down the street, for five minutes. When we got to the front door, we were told we needed an escort. "no, really...we'll stay on this street, you'll be able to see us the whole time" we said. okay...so we went! About halfway down the street we realize there is a man from the hotel following us. nice. So we walked to the end of the street and back, with a man following us. Good times.

After dinner we had a worship service around the dinner table in the restaurant of the hotel. hmm. Then some of us decided we needed a walk on Minya's famous corniche (the walk along the Nile). It was a gorgeous evening, but first we had to wait for the police/army guys to appear. Great. It took a while, but eventually a pickup truck full of police officers arrived, plus an army guy, and we were allowed to walk away. We headed out to the corniche as a group (most of the YAVs plus the Habitat staff). We sauntered a ways....then another police car arrived and now we were allowed to walk faster--finally! And then, in a fit of rebellion, we left the sidewalk and walked down to the riverwalk. Some plainclothes police and some uniformed guys too hopped out and followed us down there. We walked a long way--all the way to the CEOSS river boat. We stopped occasionally, we chatted, we walked, and it was so nice. the only blight on the evening was a man with a camera phone taking pictures of me. More on those in another post.

Anyway, we headed back and went to bed. I started not feeling well over night, and by morning I was definitely ill. I tried to eat breakfast, failed, and decided that a bumpy bus ride on dirt roads through a village was not a good idea. I stayed in my room at the hotel, in bed (and the bathroom) for the day, and the group came to retrieve me for lunch. I was feeling better by then, thankfully! I had some rice and some potatoes. We hung out a little while in the sun by the Nile, and then we were back on the train to Cairo. And that was our Habitat for Humanity weekend. Good times!

There are lots more photos of this in the "Minya in March" photo album in my yahoo photos...including photos of YAVs goofing off in our free time!
Posted by Teri at 3:35 PM