It's harder than I expected to try to stay awake (or wake up early) enough to write and upload pictures. The days are busy as we walk all over town and country, learning and seeing and eating and drinking.
I can say this though: even on second visit, Heidelberg is still my favorite. It is an adorable town, for one thing. And it has the most picturesque and atmospheric castle ruin ever. The history is incredible--going back to 500,000 BC, and with architecture/ruins/spaces that are visible from at least the 9th century. And it's the warmest place in Germany; it even has palm trees growing on one hill above the river! Not to mention that we saw the most diversity and the most inter-religious harmony there, probably thanks in large part to the post-30-years-war Electors who allowed and accepted all religious practice, Catholic and Protestant and Jew, and encouraged the community to work together for the good of all. That ethos still seems to permeate even 300 years later. 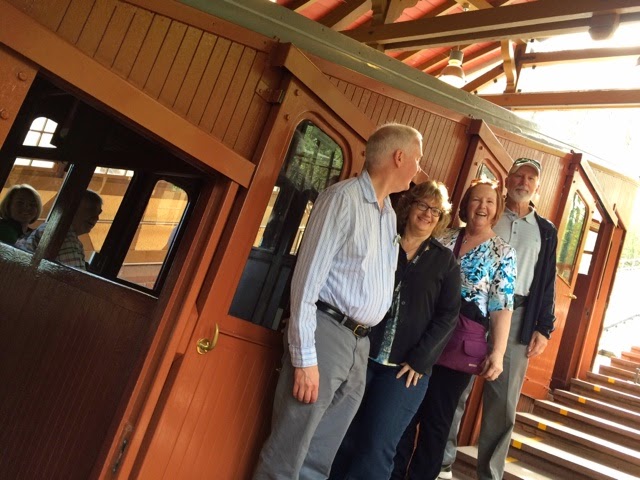 the historic funicular train, which goes to the very top of the mountain from the castle. 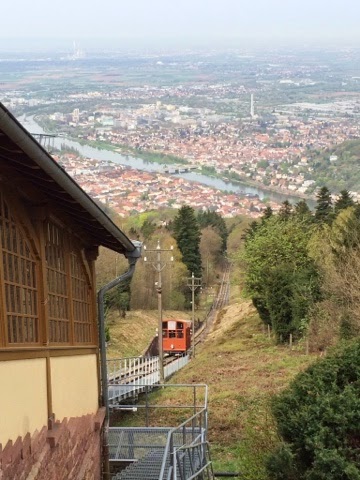 looking down from the top. holy cow. 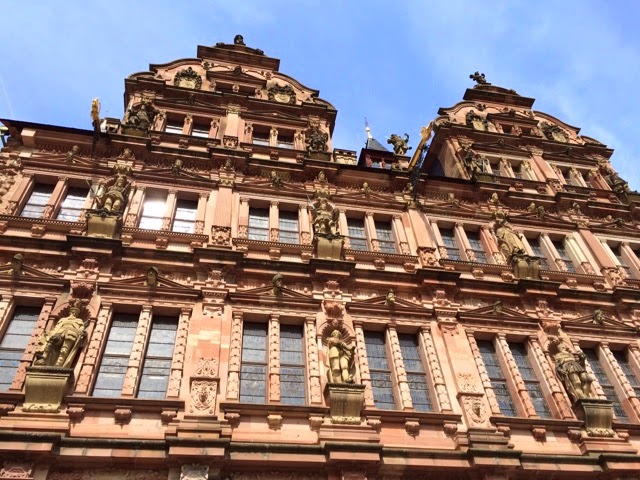 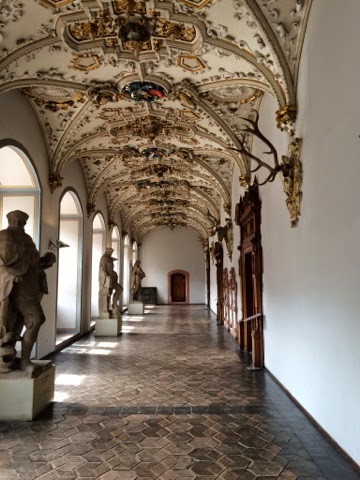 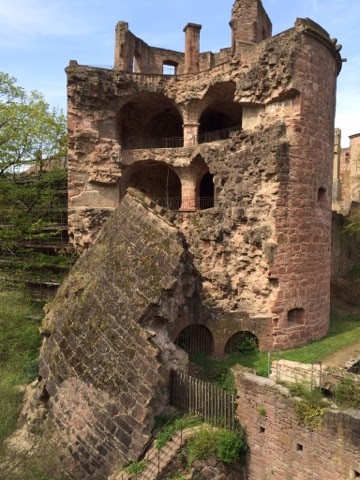 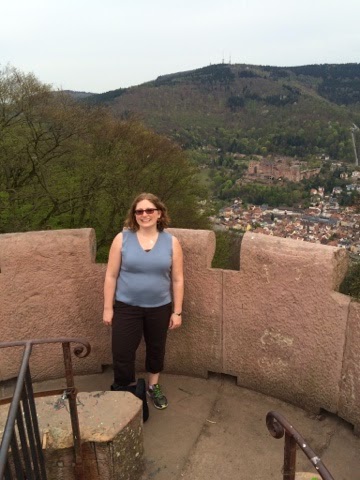 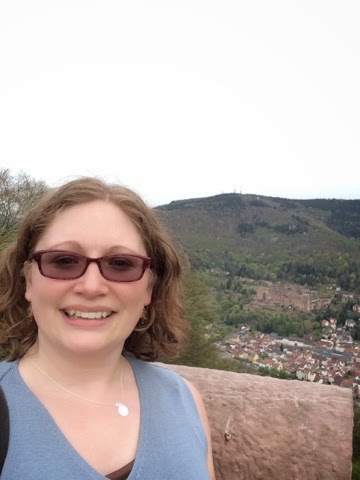 made it! except of course this turned out not to be the top of the mountain. It was so far...almost 90 minutes hiking up from the Philosopher's Way. No wonder I didn't find it last time. 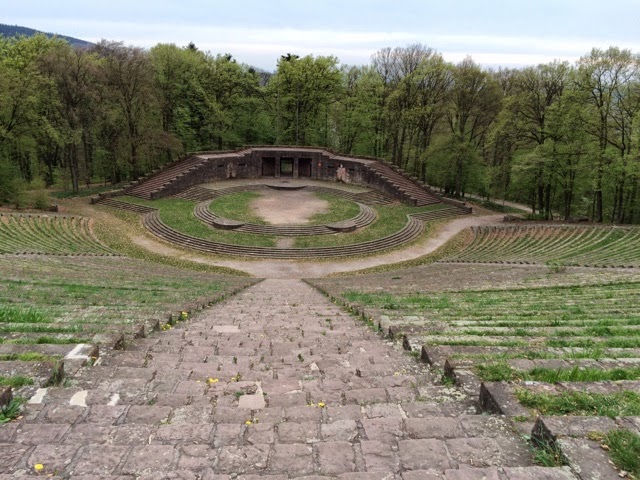 The Thingstatte, a Nazi-built propaganda amphitheater on top of a mountain.
This trip involved one place I hadn't visited before: the Buchenwald concentration camp. It is a stark place, appropriately. It is hard to imagine the level of horror perpetrated there. While there are not many prisoner buildings now, it somehow feels right to look out on what is essentially a killing field that once held barracks that could easily have doubled as graves. The scale of human destruction is unbelievable. While Buchenwald did not have gas chambers, it did have a policy of enslaving people and working them literally to death. Failing that, people were shot by firing squad or experimented on. In the last week 27,000 people were marched out of the camp, away from the approaching Allied forces, until they dropped dead along the way. The 21,000 people left in the camp when Eisenhower arrived were emaciated, ill, beaten, and abandoned in such conditions that the army, and soon the world, were shocked beyond words. 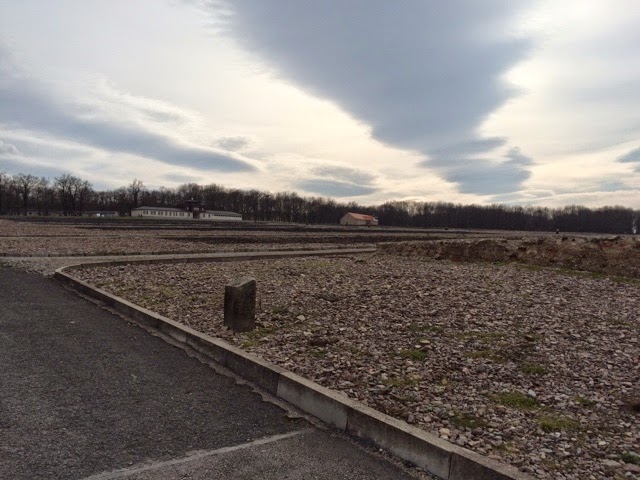 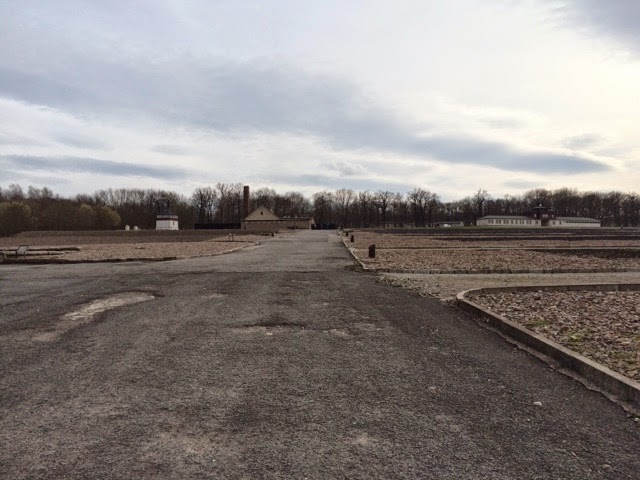 I only took the two photos...it felt wrong to take pictures, somehow.
It is hard to imagine how these things happen. How does one person or one group of people come up with such an idea, and then get people to go along? How does a government perpetrate a genocide right in the midst of the country without people noticing? How do people and nations stand by and let it happen? If they had not tried to expand territory, but instead just cleansed the nation of the undesirable people, would anyone else in the world have noticed or cared? It's scary to think how easily and quickly it happened. And some of the signs in the museum, which tell how the little things began to add up, are even more frightening because they sound so familiar. First those who would not work were abused...and then those who could not, due to disability, for instance...and then those who were undesirable (homosexuals, "social misfits," unruly/uncontrollable)...and then those whose ethnicity or religion were wrong. Hard to see that on a sign inside a building where thousands of people were slaughtered and to know that some of those same words are used in our public discourse today.
As we left the camp, we talked about the doctrine of Total Depravity: that human beings are broken and sinful, and apart from God we can do nothing good. The concentration camp felt, in many ways, like a monument to Total Depravity. The worst of humanity was played out in these camps, and in the wars in general. Of course the best of humanity played out there as well, but that is not the overwhelming feeling when standing in the place. And yet when we sat down to dinner, we toasted the endurance of life amongst death...looking for a seed of hope planted more deeply than all that is wrong.
Posted by Teri at 5:14 PM