I was born on the 175th anniversary of the Battle of Trafalgar—the naval battle that shaped Britain for generations. Or centuries, even, if you count things like Trafalgar Square in London, or Regents Bridge in Edinburgh, which are dedicated to the battle and indeed the man who won it, at the cost of his own life, Admiral Horatio Nelson.

I confess that growing up in the USA I knew precisely nothing whatsoever about the Battle of Trafalgar. I mean...I knew that Britain had a navy, obviously. I knew about the existence of Napoleon and that there were long decades of war related to his quest for territory and power. That pretty much sums up my knowledge of an event that is still known as the “most important naval battle in British history.” Apparently the 21st of October is even designated “Trafalgar Day.” Who knew? (Well...probably British people. But not me, until today.)

I have seen Admiral Nelson’s uniform in the museum at Greenwich, and marveled at the visible bullet hole (with clean edges too) in the shoulder. Most of what I know about the battle (still hardly anything) I learned in that museum.

But the reason I decided to feature this event in my birthday blog? Because the REASON it was such a victory is because Nelson went against the traditional form of naval battles, structuring his fleet in a completely different way from the way it had always been done before. Even though he was technically outnumbered, and faced a fleet with at least some of the ships being of superior quality, his choice of non-traditional tactics and structure made him the winner of the day. (Except for the dying part, obvs.)

So of course I would choose a day of unorthodox strategy leading to victory to celebrate! :-) I think that deserves a statue at the top of a huge column in the middle of a busy square in London, don’t you? 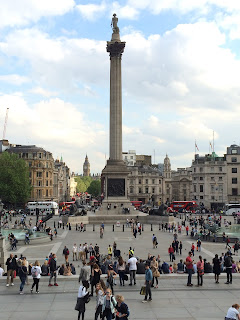 Labels: birthday buddies, it's all about me, the stuff of life