A few weeks ago, I decided to change my trip plans and go to Chartres rather than Zurich. Definitely the right choice! I loved Chartres. The town is adorable, the cathedral is beautiful, the food was lovely, and the labyrinth was awesome.

That’s right, I just used basically all the superlative adjectives. Rightfully so. The place was amazing.
I arrived at the Cathedral just as they were finishing uncovering the labyrinth (which they do only on Fridays), so I was maybe the 3rd or 4th person to enter. Good thing, because not long afterward some tour groups arrived and the labyrinth began to get a bit crowded!

It was a totally different labyrinth experience than any other. For one thing, it’s a marble floor that’s been the nave of a busy parish church for 800 years. It has pits and holes and cracks and smooth places. And it’s cold. For another thing, it’s in the middle of a big tourist pilgrim church. The door opens and slams, people walk around or even across the labyrinth, sometimes people stop in the path while someone else takes their photo “walking” the labyrinth, there are tour guides around telling people what to look at in the windows, other people walking are humming, tourists are wandering about talking to each other, etc. It was not quiet at all, and there was almost constant traffic around. 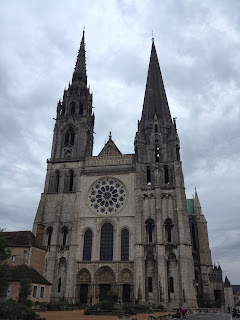 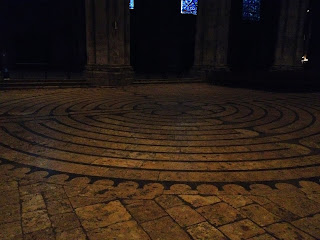 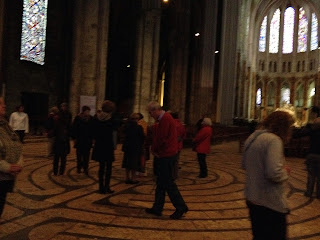 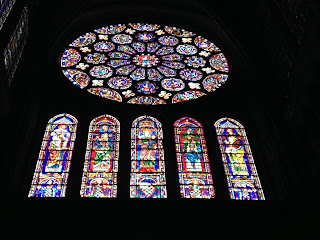 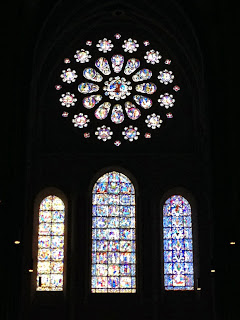 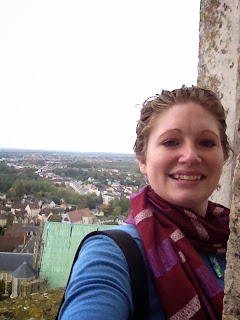 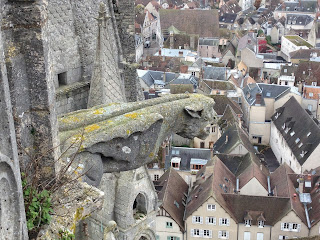 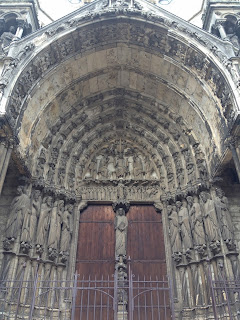 Not unlike life, in other words. It occurred to me as I was walking that this is probably a pilgrimage more suited to figuring out a spiritual life in the midst of the everyday than any labyrinth walked in silence and surrounded by candles. There, as on retreat or other apart-places, it’s easy to sense the Spirit. And then so many of us “lose” that sense when we go back to normal life. Well, in the Chartres labyrinth, normal life is all around. Some people are there for a photo-op, not a journey of discipleship. Some have no idea what you’re doing and walk right in front of you. Some are fellow travelers and some are spectators. There’s work going on, and conversation, and who knows what else. But still we continue to walk the path, keeping our eyes on it so as not to step in a hole.

There were enough other people in the labyrinth that I regularly had to step to the side to let someone pass the other direction, especially on my way out. I noticed that there seemed to be an unwritten rule, that those who had already been to the center and were returning out would step aside and make way for those still on the way in. I also noticed that occasionally I was uncertain whether I’d stepped back into the right path or was now walking the wrong way. But it all ended up okay. It’s the journey, not the destination, right? The path twists and winds and turns and passes all manner of situations and people…like life.

post-labyrinth I wandered the town a bit—who could resist the adorable rows of houses on narrow winding streets up and down hills?

In the afternoon, when it began to rain, I spent an hour sitting at La Chocolaterie—drinking hot chocolate and eating macarons. OMG, people, macarons. I can’t believe I waited until my last day in France to eat these…
Posted by Teri at 9:07 AM