the preaching experience in expat egypt...

On Friday, it's a congregation of about 35 or 40, a little more than half Western expats, the rest a mix of Egyptian, Sudanese, and a Pakistani family of 5. We use the main nave of the church and the lectern but not the raised pulpit cage thing. 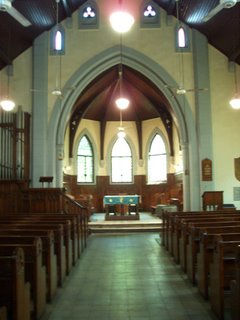 On Sunday, it's a congregation of about 10 or maybe 15 when the YAVs come, almost all Nigerian and Sudanese and the occasional other African, with one western expat, one or two egyptians and one 93-year-old American ethnomusicologist/organist who was born in Egypt to missionary parents and spent most of her life in Egypt, including being the organist at St. Andrew's for about 50 years. Unfortunately, she still thinks she can do that even though she can't anymore because she can't see and her hands don't work as well anymore. (anyway, she "played" the organ today.) We sit up on the chancel in the choir stalls and use a shorter lectern placed there just for Sunday.

As you can see, this is quite a contrast, and a challenge when one is planning to preach the same sermon, using the same texts and the same liturgy, on both days.

But there's something about that church....it's just not exciting. I hesitate a little to say this, but i just don't get the sense of it being a spirit-filled church. Maybe that's because the pastors don't convey a sense of enthusiasm about worship (in fact, they have both said to me--independently and at different times--that they "don't know anything about worship" and don't find it particularly stimulating to lead worship on a weekly basis) and people pick up on that. The congregation doesn't really sing, they practically whisper the responses and prayers, and they have that blank stare that I really hate seeing. Not even head nodding, no laughing at my minor funnies, nothing. At least on Sunday with the Africans I got some head nods and affirmative blinks. On Friday, nothing. And the thing is, the Sudanese Refugee ministry is thriving, the two Sudanese congregations are thriving, but the expat congregation is dwindling and, frankly, a little cold in the pews.

Having said that, I think some of my enthusiasm managed to rub off because we had a better response to the hymns than usual. In fact, we managed to sing "Will You Come and Follow Me" really successfully, which made me happy because it was the most perfect match to my sermon that I could possibly imagine! On Sunday, though, with Martha Roy playing, it didn't go well at all. In fact, that's a huge understatement. We were literally unable to sing because she was playing so badly. We cut her off after two of the five verses. (this is not uncommon even on well-known hymns, so i should have been prepared and just had us read the text of the hymn together, but I was so hopeful that she hadn't been lying when she said "oh yes, I know this.")

So anyway, it was a great preaching experience, lots of people said I did a good job, a few people uttered the dreaded "that was a lovely message", and one person confronted me for not preaching a literal interpretation (non-interpretation?) of the gospel lesson. But having said all those things, I doubt I'll worship much in that church anymore. I haven't been worshipping there (except when it's been required for our YAV group) for several months now anyway, and except for when another YAV preaches, I probably won't again. I have found another English-speaking church, down in Maadi (far to go, but worth it) that is interesting, intellectual, emotional, spiritual, full of robust singing, has communion every week, seems to have good community, and is, I feel, a better candidate for feeding me spiritually than St. Andrews has been. I'll let you know how it goes.

And now for the question: Is there any way, and would it be okay, for the staff of St. Andrews to find some way to ask the dedicated 93 year old organist to simply come to worship and worship rather than playing? I don't want to sound like an elitist or anything, and I don't want her to feel like every last thing she was good at is gone and she's useless, but I do want to find a way to draw the line between pastoral care for one person and the worship of the whole congregation. Seriously about the only thing she can play these days is the Doxology (Old Hundredth)--which is wonderful that it still comes out flawlessly and with conviction, like the Lord's Prayer among Alzheimer's patients--but she just can't play other things. Does this way exist? (contingent, of course, upon finding someone else who can play piano or something...in a land of rotating worshippers--volunteers, expats, missionaries, etc--this can be difficult.) I just feel like the staff's commitment to "the maintenance of divine worship" may be taking second place to the care of one woman. Or maybe I'm missing the point. Maybe my desire for great worship needs to be subjugated to her need to be at the organ. But not being able to sing that hymn today, the perfect hymn, really put a damper on my worship experience, and also--I felt, anyway--left a hole in the service and in the proclamation of the gospel. But I don't know what to do. (besides, I'm not going to this church much anyway....but for all those other people who do...)
Posted by Teri at 5:42 PM