From songbird. This is my kind of Friday Five! I love to talk about hair. Especially mine. And also especially how other people should let their hair out of the People-Magazine box. 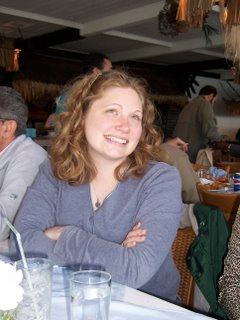 I LOVE MY HAIR!! i have great hair, seriously. I think it's wonderful. natural "botticelli" curls, natural blonde highlights in otherwise coppery-brownish color. It's great!! So poo on all you people who think that to be taken seriously curly girls should straighten up. NO! I love my curls. :-p

2) Have you ever colored your hair? If not, would you consider it?

I have. In high school we went to Hawaii and I used Sun-In which turned me a little blonde. In college I spent two summers living and working in Scotland and I colored my hair copper once and auburn once. Auburn was bad--it turned out much too dark and with purple undertones. When I got home to Chicago I had to go to a salon for a color correction, which took several hours of sulfur-smelling stuff and recoloring back to a coppery blonde. ugh. I have also had highlights several times. I can handle that. But it's not good for your hair, and I'm all about doing things that are good for my hair.

3) What's the longest you've ever worn your hair? The shortest?

When I was younger (like from 4-7) I could sit on my hair. The shortest...umm, I had a chin-length bob in middle school. It was a bad idea because my face is too round for that. (now i wear it about shoulder length or a little longer.)

4) When and what was your worst. haircut. ever?

the aforementioned chin-length bob. i had not yet embraced my curly girl self and was still starightening via blowdryer. apparently this length is good for straight hair. it is not good for curly hair coaxed straight every morning for an hour. it flipped in weird directions because the person hadn't thought about the waves when they cut it. it was too short. nothing was right. i hated it. AND it's been memorialized in my school picture from that year. (freshman year of HS, maybe?)

5) Tell us a favorite song or scene from a book or movie dealing with hair.

*Well, there's the classic Oh Where Is My Hairbrush from Veggie Tales..."why do you need a hairbrush you don't have any hair!!"
*There's also the scene in the first chapter of the Princess Bride where Buttercup suddenly realizes that she could be really pretty and she brushes her hair a thousad strokes a day, and it takes a long time, but it doesn't matter because won't Westley just love her autumn-colored hair when its so shiny and wonderful?
*And, naturally, there's the scene in the seventh season of Buffy when Buffy takes Dawn to school and gets mistaken for a mother, and she says "it's the hair, isn't it. I have mom hair!" and Dawn says "no, you don't" in that rather perfunctory voice used to tell moms they don't look old. :-)
Posted by Teri at 10:54 AM