Two more of our party left us, early in the morning…Stephen and Eric headed back so they could be back for their classes on the weekend. We also lost Jay, in a sense, because he went off very early and did his own thing. “And then there were five…” The girls and Jason. Jason’s 8.30 excursion to the bank had been extremely fruitful—they had his card in hand and were waiting for him when he showed up. Apparently that machine is only for exchange rates and information, not for taking out money. Maybe they should put a sign on it in English so people who don’t read Hebrew at least have a chance not to lose their cards! And a big sigh of relief from the Jason corner (and the Teri corner too) that the worst-case scenario wasn’t one we had to play out! While all that was going on, we girls were taking cold showers. It seems the hot water had run out AND the power had gone out and we were left with ice-cold water. I demonstrated the Jamaican cold shower dance for my roommates—in our room, not in the shower. Sarah came out of the shower shaking and laughing uncontrollably, apparently from the cold. It didn’t help matters that we didn’t have heat in our room! It was an experience to start a day of experiences….

We decided to try to make both the Holocaust Museum (Yad Vashem) and the Israel Museum in one day. Oh, never let it be said that YAVs aren’t ambitious! We grabbed a yummy bread-and-zatar (spice combination…green…actually, I think, from Lebanon but don’t tell any Israelis that) breakfast, then headed out to try our hand at the Jerusalem public bus system. Unfortunately, it seems our instructions were unclear, because we waited a very long time without seeing the bus we wanted. We walked up the hill and across the street, and lo! there were many bus stops with many people and many signs, and we soon found what we were looking for. When the bus came, we paid our 5.50 shekels and sat down for an exciting ride! Some in our group were nervous about using public transportation in Israel, and some were declaring they’d never tell their parents about this because they had promised not to ride any buses. I hope none of their parents read this blog. The bus ride was uneventful and after about 20 minute we were at our stop—conveniently pointed out by the man we had asked before we got on the bus if this bus went to Yad Vashem. Thank you, anonymous Jewish man! You are very nice.

Once we arrived at the museum, I offered to be the bag/coat/camera watcher. I took a table in the all-kosher-all-the-time café and everyone piled their stuff in the chair opposite me. I grabbed a kosher Coke from the counter (expensive at 10 shekels—over two dollars for a 20oz. bottle!), borrowed some paper from Jen and whipped out one of my trusty Pilot V5 roller-ball pens. Then my friends headed up and into the museum, and I sat to write about yesterday’s experiences on the via Dolorosa and as a tour guide. I can’t believe I had not thought to bring a book. I knew I wasn’t going in this museum—I had come along so that after lunch we could go together to the Israel Museum rather than me taking a bus by myself and trying to meet them at the Israel Museum.

Why wouldn’t I go in the Holocaust museum? Well, I went last year, and it was horrendous. It was heart wrenching on the historical level, and angering on the contemporary level, and it was such an emotional roller coaster that took me a few hours to recover from that I was not about to do it all again. I definitely couldn’t take the stories of torture and death, and I wasn’t willing to sit through and walk through the Jewish perspective on being put into walled ghettos while Israel is, just outside, putting people into walled ghettos. Let me be clear about two things, one more important than the other. 1: The Holocaust happened and was a huge tragedy with many people to blame. Such a large number of lives were lost that I can hardly comprehend it. Evil was definitely at work. The event is clearly a definitive part of the Jewish worldview (and, in that sense, is “mythic” because it is a moment enshrined in the worldview and shaping of people’s lives and experiences as Jews. [side note to those of you who are blasting the Iranian president for using the word “myth” and will probably do so to be too: look up the word “myth” and its various meanings. You’ll find that usually myths are based on facts.] ). 2: This is the first time in my life that I can remember not wanting to revisit a museum. And a large part of that is my really intense anger that these people who were so injured, who were so badly treated, who will “never forget” and will never let anyone else forget (which is good), are able to turn around and forget that experience and do it to other people.

As I sat, I wrote:
~~~
Sitting in this café is a strange experience. Writing, people watching, food smelling...mmm, I’m getting hungry and my compatriots have yet to emerge. Last year this museum was hard for me to take (obviously, since I refused to go in again). Yet as people come and go for lunch after their museum visit, I see little of what I was feeling last year. The people here are talkative, laughing, eating…things I definitely didn’t do upon exiting the museum. Last year I remember being acutely aware of my German ancestry (which is visible in basically every square millimeter of my physical person). This time I feel out of place too, but only because I’m one person at a table and the café has filled to overflowing.
~~~

And then my friends appeared, one by one, most looking a little shell-shocked. We grabbed lunch from the kosher buffet (salads, rice, and veggies, and Sarah and Jen had spinach lasagna too). Jen and Jennifer didn’t finish their lunches. We chatted a little, but not a lot. We talked about the exhibits inside. We talked about the obvious Jewish slant. We talked about the politicking of putting a beautiful panoramic view of Jerusalem (out the window) as the last “exhibit.” We talked about the Palestinians. We read from the little brochure everyone gets at the museum entrance and substituted Palestinian details for Jewish details, changed the dates a few years, and found it to be completely accurate. We shared some frustration. And then we looked at our watches and found it was nearly 3. We figured out that by the time we got to the Israel Museum, we’d have very little time and then we’d have to go back anyway, so we decided to head back into the Old City and do some wandering, shopping, or resting. And that was that.

After yet another uneventful public bus ride, we split up. Jen and I went a-wandering and, after some jewelry excursions (Jen bought two cross necklaces, I bought no jewelry because I kept telling myself I have enough crosses, that I only wear two of them anyway) 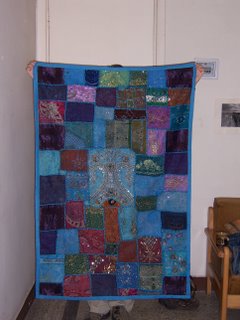 we found ourselves face-to-face with a really beautiful Indian wall-hanging. I had been wanting one, since I didn’t buy one last time for fear of not fitting it in the luggage. This was the first one I’d seen and loved. Immediately the shopkeeper took it down from its perch outside his store and began showing me several more so I could compare. Naturally, the one I wanted was the one I’d seen outside. It is handmade, it’s in a quiltd rather than geometric style, it has in the design what looks to me like the Tree of Life. He told me it was 150 shekels (33 dollars) and that was the best price I would find in the market. I had heard quotes from other shopkeepers as high as 300 shekels, so I believed him. He refused to bargain. I bought it (with Jen’s money, because I hadn’t been to an ATM yet). Jen also bought a beautiful pashmina for 50 shekels (11 dollars). We went home happy, to say the least! And dinner, you might be wondering? Samara, again. I told you it was “our” café! mmm, they have GREAT hot chocolate.
Posted by Teri at 2:28 PM