We decided not to wake up too early, but I needed an ATM so I was up a little early anyway. We once again had no hot water, this time because the power went out overnight and therefore the water heater was not so much heating. mmm, cold showers. Gotta love the Jamaican-cold-shower dance! Perhaps I will entertain the possibility of calling it the Jerusalem-cold-shower-dance.

Our first task of the day was to find and visit the Wohl Archeological Museum, also sometimes known as the “Herodian Quarter.” It is a museum built on the excavations of the elite neighborhood of Herod the Great’s Jerusalem. I’m sure it’s really cool, but we never found it. We wandered around the Jewish Quarter (and occasionally accidentally wandered into the Muslim Quarter too) for about an hour with no success. When we ended up in the Wailing Wall plaza again, we decided to visit Mt. Zion and then look again.

Mt. Zion is quite an interesting place…sometimes called the “City of David,” it has some interesting sites and some sites of dubious historicity. First we visited the Church of Mary’s Dormition (also known as Dormition Abbey), which is a Roman Catholic church commemorating the place where Mary fell into a deep sleep. It’s not at all clear to me whether this is Mary dying, or Mary just taking a nap because she was so tired from raising Jesus only to have him die young at the hands of the oppressors. I am not as up-to-date on Roman Catholic doctrine RE Mary as I probably should be. The fact that we visited Mary’s tomb (controlled by Greek Orthodox) probably isn’t helping. Anyway, the church was beautiful, with side chapels “contributed” or “gifted” by many different countries (such as the Ivory Coast, Brazil, Germany, and many more). There are some fantastic mosaics. My favorite mosaic is one in the cupola over the effigy of Mary sleeping (downstairs, under the main sanctuary). The center/top of the dome is Jesus, and surrounding him are women of the Old Testament. Eve, Mariam, Ruth, Esther, Judith, and Jael are depicted. It’s pretty cool. You can see pics by following the link to the left and checking out the “Christmas” album.

Upstairs, in the main sanctuary, the floor is decorated in a huge mosaic showing the months and the zodiac signs, the names of the prophets, the names of the disciples, the symbols of the four gospels, and a symbol of the Trinity. It’s quite a large circle, let me tell you. No one got good pictures of this, mostly because a lot of it is covered by chairs.

Once we left the Church of the Dormition, we headed for the “caenaculum”—the upper room (conveniently located next to David’s Tomb?). First David’s Tomb, a spectacularly boring sight where men and women are separated (different entrances and a screen down the middle of the room where you view a big box covered in navy blue cloth) and where men have to wear a yarmulke. Near the entrance there is a man handing out paper yarmulkes. hehehe! I think someone has a pic of Jason wearing one, but I don’t know who so I can’t show it to you. I’ll let you know if I find it. Anyway, David’s Tomb amused us for about 20 seconds, and we left. We headed out to the entrance to the “Upper Room” which was a spectacularly spurious historical attribution. You go up some stairs and into a room that is very large and of Gothic style, complete with arches and imported grey stone. Right, the Last Supper happened here, in a room that is not only outside the city walls (no matter what period of history/archaeology you’re looking at) but also clearly built hundreds (or maybe even a thousand) of years after Jesus. We stayed about two minutes, most of them laughing and taking pictures of us looking confused. This was Sarah’s favorite place in all of Jerusalem. (jk)

Once we left the oh-so-thrilling gothic cathedral of an upper room, we headed back through the Zion Gate and into the Jewish Quarter to look again for the Herodian Quarter. No luck, but I did show my friends the Cardo (the Roman street) on our way to the Damascus Gate. In the absence of the Herodian Quarter, we headed to look for the Garden Tomb. Now, I know where the Garden Tomb is. I’ve been there before (albeit on a bus on our way back into Jerusalem one afternoon), and I’ve seen on the map where it is. However, when we came out the Damascus Gate, I was a little turned around and inadvertently led my friends down the road to the left rather than the road to the right. This ended up leading us not only NOT to the Garden Tomb, but also directly into an Orthodox Jewish neighborhood with a big sign telling people not to walk through in inappropriate clothes, which includes women in trousers. Hmmm... 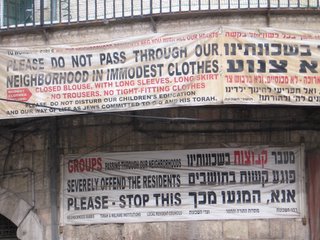 At this point Jason decided to head off for some alone time at Gethsemane. Sarah, Jennifer, Jen and I wandered around some more, eventually finding our way back to St. George’s Anglican church, where we got directions to the Garden Tomb. When we arrived just after noon, however, we found it opened at 2pm. Oh dear. Well, we had wandered some in the New City, Sarah had found some Skippy Peanut Butter, and we’d seen a sign explicitly telling people not to come into an Orthodox Neighborhood. good times. Unfortunately, I felt really horrible for leading my friends on a more-than-an-hour hike around the city looking for something that I knew was just 100 meters or so outside the gates but couldn’t seem to find. When we finally came to the Garden entrance, we could actually SEE the Damascus Gate. Anyway, it was closed. Sarah went off to the Church of the Redeemer and back to the hostel for a little while, and Jen, Jennifer, and I went to look for some lunch. We tried to get pizza but the place we were apparently had a broken oven or something. This threw our whole lunch-ordering into chaos, and we had to send the waiter away for five minutes while we tried again. We ended up with greek salads, falafel, etc. It was a good lunch. By the time we were done, it was 2pm and we headed back to the Garden Tomb.

The Garden Tomb is the site preferred by the Protestant churches as the site of Golgotha and Jesus’ tomb. There is a lovely garden with flowers, trees, streams, and lots of peace. It is in every way different from the Church of the Holy Sepulchre. I think that historically (and in terms of the cloud of witnesses), the Church is more likely the place. But in terms of some kind of spiritual place, the Garden Tomb is more what most protestants are looking for. My fellow YAVs really enjoyed the Garden Tomb. I admit it is incredibly beautiful and peaceful. But I also honestly felt more at the church. I think some of it has to do with all the candles, and some to do with the tradition and the feel of all the people who have prayed there. Anyway, our visit to the Garden Tomb was topped off by the gift shop and the wonderful, clean, and free bathrooms. And then it was all about wandering and shopping again. We wandered a bit and found ourselves at the CasaNova Jerusalem, then wandered some more and found ourselves in front of Shabaan’s shop, where my group last year did most of our jewelry shopping. Shabaan sells everything—from watercolor prints to kefiyyas to old silver jewelry to custom engraved jewelry. Across the way from him is the shop where I bought icons and my Jerusalem cross last year. This year I did a wonderful job of not buying anything! Well, except for some Dead Sea Mineral Hand Lotion. It’s really good stuff.

After sending Jennifer on her way down Christian Quarter Road to look for a wall hanging, Jen and I headed back to the hostel to rest a little. We were VERY tired. Jen took a nap but I headed up to the roof to check out the view at sunset. I arrived just as the dusk call to prayer was beginning to sound. There were two other people on the roof, with whom I chatted for a bit. They ended up telling me that the Herodian Quarter was really easy to find—we just needed to turn right out of the hostel, turn right again when the road ended, and we would have literally ended up at the doors of the Wohl Museum. oy! Anyway, I saw the “sunset over Jerusalem” from our roof. I also enjoyed watching the Mt. of Olives change colors as the sun set, especially knowing that Jason and Sarah were over there, watching the sun set over where I was. It was beautiful. And then I realized that I was running a bit late…so I went down to wake up Jen and to get ready for our last dinner (last supper?) in Jerusalem. Jen and I finally left the hostel after we were supposed to be at the restaurant, and we went to look for Jennifer, who we thought was going to be waiting at the bottom of the stairs in St. Marks Road. She wasn’t. We looked, but she wasn’t there. We got trapped by one shopkeeper, but eventually we got away and joined our group at Samara…late, of course. No need for me to break my trend of being late to meals on this trip!

After a lovely dinner—again with the hot chocolate!—we checked the hot water situation in the hostel. Still no hot water, so we declined the evening shower option, packed our clothes and new stuff into our bags in preparation for our early-morning departure, and went to bed.
Posted by Teri at 10:39 PM