Today's Friday Five is about the Bible! You may play right here in the comments, or if you write a blog post, link it here.

Since we just finished reading the Bible in 90 Days, this is particularly current/relevant/awesome. :-) 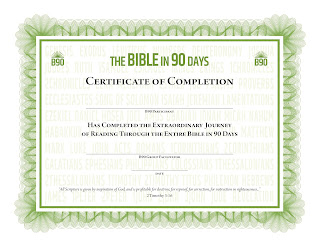 1. What is your favorite Bible verse? Isaiah 55.8 "My thoughts are not your thoughts, and my ways are not your ways, says the Lord..."

2. What is your favorite book of the Bible? Isaiah for sure! If I had to pick from the NT I'd choose Mark, every time.

3. What is your favorite story from the Hebrew Scriptures? Today I think I'd go with Zelophehad's Daughters (from Numbers 27), or perhaps the widow who feeds Elijah and her jar of meal never runs out (1 Kings 17).

4. What is your favorite story from the Christian Scriptures? Mark 2, where the four people bring their paralyzed friend to Jesus and dig through the roof to get him in, and Jesus looks at them, sees their faith, and heals their friend.

5. What verse do you wish people would quote less often? John 3.16. Seriously? That's the best we can do? I might have to start sneaking in something like "1 John 3.16-17" just because it's so much better, and a subtle enough difference that people might not notice until later, and maybe they'll look it up. Or just noting lots of other 3.16s (both letters to Timothy have great chapter 3-verse-16, for instance...).

Bonus: What is your favorite obscure fact or verse or story or thing about the Bible? I don't know if this is my favorite or not, but I think it's my favorite thing I learned this summer when preaching through really strange things during the Bible in 90 Days...Jephthah says to his daughter that he has made a vow and he is therefore required to fulfill it. That's not true. I would never have noticed this if we hadn't just read the Torah a couple of days before, but: in the midst of all the lists of punishment for not fulfilling a solemn vow, there are provisions for what to do if a vow turns out to require something illegal (child sacrifice, for instance), and also monetary offerings that can be made if a sacrifice is impractical. So Jephthah's daughter was sacrificed to his ego and his just-enough-knowledge-to-be-dangerous, not to his vow. #thatllpreach

Starry Night--a sermon on Abraham and God in Genesis 15


When God called Abram and Sarai to leave their home in Ur and go to a new land, they went without question, believing God’s promise of descendants as numerous as grains of sand, trusting that God would use them to bless the whole world. When the camp grew too large for the land to sustain all the herds and people, Abram’s nephew Lot took his part of the family and animals, and went to settle in another area. During a war between Canaanite tribes, Lot was kidnapped by raiders. Abram took his men and went to battle the hostile tribe, rescuing Lot and all his family and their possessions. Abram then refused to take any of the spoils of war, returning home having received only a blessing from the high priest of the area where Lot lived. We pick up the story from there, in Genesis 15, which can be found on page __ in your pew Bible if you’d like to follow along.

After these things the word of the Lord came to Abram in a vision, ‘Do not be afraid, Abram, I am your shield; your reward shall be very great.’ But Abram said, ‘O Lord God, what will you give me, for I continue childless, and the heir of my house is Eliezer of Damascus?’ And Abram said, ‘You have given me no offspring, and so a slave born in my house is to be my heir.’ But the word of the Lord came to him, ‘This man shall not be your heir; no one but your very own issue shall be your heir.’ He brought him outside and said, ‘Look towards heaven and count the stars, if you are able to count them.’ Then he said to him, ‘So shall your descendants be.’ And he believed the Lord; and the Lord reckoned it to him as righteousness.


They did all the right things.

They married and built a life—by most accounts a successful life with many animals and people, though no children, which meant Sarah was considered a failure.
They heard God’s call and followed—God said “go” and they went, without knowing where or why exactly.
They believed God’s promise—land, heirs too numerous to count, blessing for the world.
They looked out for their family, rescuing nephew Lot and the others who’d been captured in battle.
But still…a fairly major part of the picture was missing.

There were no children.

That part of the promise where God said Abram and Sarai would be a great nation, with so many descendants they would fill the whole earth…it was not only not fulfilled, it was impossible. They were in their 80s now, and their life and future were less secure than ever.

They probably thought about it every day. They’d done everything right, followed all the directions…perhaps they even went back over their memories, year by year, wondering where they’d gone wrong to end up in this situation. How did they get to this point, where all they’d worked for would be left to a slave because there were no children to inherit? They never thought this was how it would turn out.

And now here’s God, promising yet again “your reward shall be very great.” And I can practically hear Abraham’s sarcastic “thanks a lot, God”…because what good is a great reward if there’s no one to pass it on to? There’s no one to remember when he’s gone, no one to carry on the legacy of promise or even just of hard work. So there’s no point in collecting more stuff or more wealth, because soon it will all be over anyway. What can God possibly give that would matter to someone whose family has no future?

I suspect many of us have had some variation of this feeling—wondering if all the work we’ve put in might be for nothing. Maybe because life just hasn’t gone according to plan. Maybe because there’s no next generation to pick up the things that have been important to us. Maybe because we’re struggling in ourselves, wondering if God’s promise is really true, or if that really was God’s call we followed or some other voice.

One of my favorite things about this story is how blunt Abram is. He barely lets God get a word in edgewise as the accusing words tumble out—“what will you give me? You promised children, but there are none. I had to come up with someone to put in my will, because you didn’t.” He point blank says that God has fallen down on the job, has broken the promise, and that has real consequences. He doesn't mince words, or try to be nice, or flatter God…he just says what he’s feeling.

And God answers him. God doesn’t gloss over Abram’s worries or frustration or grief, and doesn’t just reiterate the previous promise as if Abram hadn’t heard the first time. There are no platitudes or clichés here. God meets Abram right where he is—sad and angry and tired and confused.

And there, with Abram’s accusation hanging in the air between them, God ushers Abram out of the tent and points him to the starry night.
After speaking specifically to the Eliezer question, God lifts Abram’s eyes out of the swirling vortex of despair he’d thought his way into, and told him to look at the swirling expanse of the universe instead. Abram looked up and saw light that came from thousands of years ago, shining in the sky. He saw the milky way, like a carpet runner across the sky. He saw millions and millions of stars…each placed there by the same God who was now speaking with him.

Think for a moment about the starry night sky. We can’t see it very well here, but even though we have obscured it with our own lights, it’s still there. Thousands of generations have passed since that light began to move toward us. And there is nothing we can do to stop it from twinkling for a thousand more generations after us.

Look into the sky, God says—try to count. Go ahead, I’ll wait.
That is what I have in mind for you.

God answers Abram, not with the pragmatic solution he’d hoped for, but with the gift of insight into God’s plan—which is far bigger than anything we can count or imagine. The practical part of the answer comes later, well after they try to take matters into their own hands and force God’s promise to their timetable. But along the way, every night, there’s the reminder: God’s intention is as long lasting as the stars, and as vast as the universe, and there is nothing we can do to stop it shining.

This answer seems to have worked for Abram, at least for the night. He cleared the air with God, and he caught a glimpse of God’s vision, and he trusted God’s word.

But I learned this week that the Hebrew is actually kind of vague here. The translation we read today adds a word to clear it up, but in reality, it’s unclear. We read through the lens of the letter to the Hebrews, and assume it was the Lord who reckoned righteousness to Abram. On its own, the Hebrew simply says “and he reckoned it to him as righteousness”…and who is “he” and who is “him” is ambiguous. So there are some who say that it was Abram who reckoned God righteous—believing God was someone trustworthy and caring and real with whom he could be in right relationship.

Or perhaps it works both ways. God worked on Abram, and Abram worked on God, and between the two of them trust built up, and their relationship grew and matured. After all, a right-relationship will never be static, and it will certainly never be one-sided, or dishonest or inauthentic. Abram was painfully honest, and God listened and responded. Not the practical but shallow response Abram wanted right at that moment, but the response he needed to keep moving toward God’s goal. Together, Abram and God trusted each other.