In 2017 I fulfilled a dream and followed my call to move from Chicagoland to Scotland. It is, so far, perhaps the best decision of my life. I am super happy here. I'm also happy to chat to others about the experience! The page that explained this choice and answered some questions is outdated in many ways (my former church has a pastor, and I have lost one of the meows) but some of it still applies, so I'm leaving it below.
I am now the minister of a fantastic church in Gourock, west of Glasgow, on the coast. I get to be with amazing people, see an amazing view, and do amazing work.
~~~~~~~ this was the page before I moved...~~~~~~
I went to Scotland for the first time in 2000, as a 3-month volunteer at the Iona Community. I still refer to Iona as my Happy Place...I went back for a second three months the next summer, and have been in love with the country ever since. 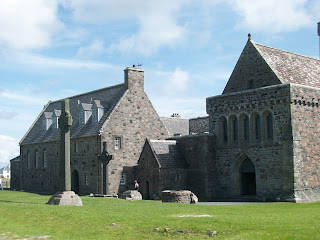 Yes, I know that Iona is it's own thing in lots of ways, and No, it's not the only part of the country I've been to. 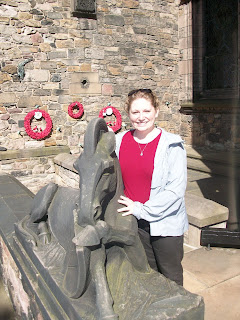 Whenever I travel, I try to work things out so that I can spend some time in Scotland while I'm already on the other side of the ocean. Twice before I've nearly moved, but didn't go through with it. This time the timing seems about as right as it'll ever be. I'll lose a ton of money on my house (it's now sold!), but short of staying here until it's paid off, that would be true no matter what. The church I'm serving now has been through hell and high water (sometimes literally), has done really hard work, and is in a fantastic place right now--ready to do many more great things for the community and the world and each other. It's a great little church that needs the pastor who can take them to the next level. Over the past year or so I've realized that, even though it wasn't the original plan, it turns out I was the pastor who could lead them through a conflict, healing, visioning, restructuring phase, and that phase is as complete as it'll ever be.

The meows (Ollie and Andrew) know something is up, because there's been a moving sale and a bunch of people in and out of the house and everything is strangely clean. They are extra snuggly, wanting to be near me at every moment I am home. They have been ready for the UK's new pet-travel-scheme rules from the moment those rules went into effect: they have microchips, papers, vaccinations, etc. There is no quarantine for healthy pets whose papers are in order, so that's good! The process for them now looks like this: 1. get used to the new carriers (which are enormous). 2. 10 days before travel, get examined by a vet who will fill out the USDA paperwork/certificate for travel. 3. Said certificate must be endorsed by the USDA office, and returned to me before travel day. eek! 4. Attach all those papers to the carriers, and get them to the cargo shipping part of the airport. 5. Come through customs at EDI. 6. arrive at our new (temporary) home! 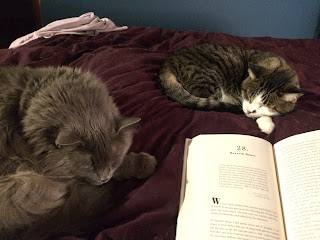 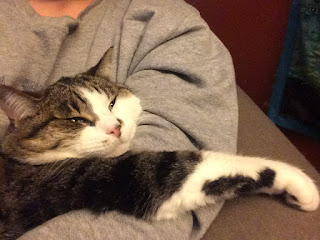 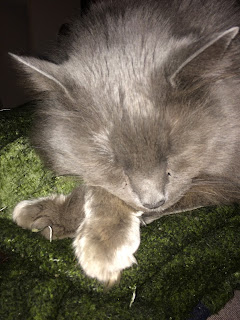 The logistics and costs of shipping live animals to the UK are considerable. Because of the logistical difficulties involved in the USDA endorsement, cargo shipping (the only way animals are allowed to enter the UK on a commercial flight), and customs (they must be brought through customs by a third party, not by the owner), I will be using a pet relocation company. The difference in cost between trying to do it myself and using the company is around $750, and I think my sanity is worth more than that. :-)

If you'd like to help the meows make their journey to their new home, I'd be very grateful! I am hoping not to go into too much debt to bring them along. They are my family, and I am the only family they have ever known...we stick together.

I will be taking some of my things with me as well--a couple of furniture pieces (my grandmother's drop leaf dining table, for instance), about half my library (it was hard enough to cull half! I can't part with any more), and a few non-electronic kitchen things. Other than that, and clothes, I'll be pretty much starting over when I get settled there, and after this weekend's moving sale I'm fine with that! I can't even figure out how I accumulated this much stuff. It's amazing what ten years in one house will do.

Once I get to Scotland, the plan is this:
1. I will live in Musselburgh, just east of Edinburgh, in a flat I am renting from a dear friend who is giving me a great deal. It's right by the beach, and I look forward to running on the promenade along the ocean! I ran that path during the Edinburgh Half Marathon last spring and it was gorgeous.
2. I will spend six months working at Marchmont St Giles parish church, about a mile south of the Royal Mile, learning about the Church of Scotland's culture, polity, history, and interface with community organizations.
3. I'll rely on public transportation...I don't think simultaneously making a huge move and learning to drive on the other side of both the car and the road is a good idea.
4. After six months, I'll hopefully head into "my own" "permanent" parish (recognizing it isn't mine and life isn't permanent!). The call process in the CoS is very similar to the PCUSA, so I don't know where that will be until the Spirit puts us together....watch this space. :-)

A couple of FAQs:
How long are you staying there? Indefinitely. Forever. I don't intend to come back to the USA...and I also know that intention isn't always the indicator and nothing is impossible. But my plan is to move there, and not move back.
Will you become a UK citizen? I have no idea. There's a lot involved in citizenship proceedings, in the amount of time and the type of visa and the various costs and benefits of different nationalities...it's way too early to think about that.
How does your family feel about this? My human family is used to me living far away, so they're fine.  Or if they aren't, they're keeping that to themselves in fine Scott/Peterson fashion. My feline family is coming with me and they don't know any better, so they're also fine.
What about your PCUSA credentials? That is a matter for the Presbytery of Chicago to decide...I expect to be a member at large of some sort until at least the end of 2017, and after that it's up to them.
How will you get your stuff there? On a container ship. Pro-tip: do not go watch YouTube videos of how container ships work. It's kind of nerve-wracking to think about all that stuff just stacked up on a barge crossing the ocean. And *definitely* don't go read about how many of those containers fall overboard every year.
Won't you hate the weather? Have y'all ever spent a winter in Chicagoland? BRRRRRRRRR. I'm super over it. At least most of Scotland isn't getting 8" of snow and having weeks of -50 degrees. Contrary to popular belief, the sun really does shine in Scotland. Perhaps less than here, but at least it isn't freezing. Or humid in summer.
Do you know people there? Yep! I have kept in touch with former vollies from those summers on Iona, a couple of Iona Community members, and I know about a dozen Church of Scotland pastors. There are even a few people who meet all three of those categories!
What about Cinnamon Toast Crunch? Are we going to have to ship that to you again like we did in Egypt? You'll be happy to know I researched this already, and Cinnamon Toast Crunch has a different name in the UK, but it is definitely available in your average grocery store. Breakfast is safe. :-)