But on the first day of the week, at early dawn, they came to the tomb, taking the spices that they had prepared. They found the stone rolled away from the tomb, but when they went in, they did not find the body. While they were perplexed about this, suddenly two men in dazzling clothes stood beside them. The women were terrified and bowed their faces to the ground, but the men said to them, “Why do you look for the living among the dead? He is not here, but has risen. Remember how he told you, while he was still in Galilee, that the Son of Man must be handed over to sinners, and be crucified, and on the third day rise again.” Then they remembered his words, and returning from the tomb, they told all this to the eleven and to all the rest. Now it was Mary Magdalene, Joanna, Mary the mother of James, and the other women with them who told this to the apostles. But these words seemed to them an idle tale, and they did not believe them. But Peter got up and ran to the tomb; stooping and looking in, he saw the linen cloths by themselves; then he went home, amazed at what had happened.

Yesterday afternoon I heard a story on the radio of a young man whose grandmother was dying. He’d had a conversation with her that made him question his assumptions about God. While he was at work, he decided to put God to the test. He told God that he was going to throw a golf ball, and if it hit a cabinet at the other end of the 50 yard garage, then he would believe forever. If the ball missed, he was done with the whole God thing.

This young man threw the golf ball, and it hit a grate just a few feet in front of him and ricocheted all the way to the back wall behind him. He walked slowly toward the cabinet at the other end of the room, in shock that his assumptions had been so decisively confirmed—and yet still wondering how this could be. Was everything his grandmother told him a lie? Was her life a lie? What now, now that God was proved wrong? Is that it?

Suddenly he heard something something moving along the floor…as he looked around, he saw it was the golf ball, rolling its way around carts and drains all the way from the back wall 50 yards away. As he watched, that ball rolled straight up to the cabinet and hit it smack in the center—as he put it “more middle than I thought was middle.”

He thought he knew how the story was going to turn out. I’m not saying God won the bet this young man made, but I am saying that God is all about surprises.

Jesus’ friends had already been surprised by how their story had turned out. They were following someone they thought was the Messiah, someone who taught with authority and told great stories and did amazing things, someone who convinced people to share scarce resources and welcome the outcast and ask hard questions. The last few days had all gone horribly wrong—though in a predictable kind of way. If you say things that threaten people in power, then often bad things will happen to you in return. People really like to keep hold of their power, and some will go to any length to tighten their grip. In their heart of hearts, the disciples knew that this was coming. They knew that it was the end for their friend, their movement, and probably for them.

So that morning, it had to be the women. They’re the ones who could risk being unclean from touching a body, because they don’t get to participate in rituals that require purity anyway. They take up their spices and oils, say goodbye to the scared group of men hiding away in their upper room, and trudge down to the grave. They know what to expect—to struggle rolling away the stone, to smell the scent of death, to work hard to ease stiff limbs even through their tears. 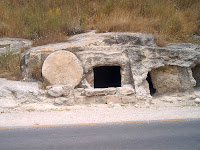 But something is different…the stone is already rolled away, there’s no death hanging in the air. Instead they are admonished by dazzling strangers to “Remember.” Remember what he told you? Remember who he is? Remember who you are? And when they put the pieces together, they run back to tell the others—this story has not gone according to our plan. We didn’t think it was possible, but…

And the men hiding in the upper room…they scoff. They dismiss. They insist this story is nothing but garbage, useless twittering of mindless women. The word we hear as “idle tale” is the Greek word “lairos” which means something much more crass…it’s the stuff you collect from your cows for fertilizer on your crops. It’s gross, it’s waste. They know how the world works—someone dies, and that’s it. When someone dies by crucifixion, you don’t even talk about them anymore, out of shame and fear that you might be next. It’s over.

But then Peter…always Peter, the one who asks the most questions, who gives us an example of both wholehearted love and wholehearted foolishness, decides to just double check. When he arrives at the tomb and finds that the women weren’t full of it, he too puts the pieces together and is amazed.

What better word to describe what has just happened? The world has just been turned upside down. What kind of story is this, where golf balls hit their target even after moving the wrong direction, a story where dead people don’t stay dead?

Did you notice that not one person in this story thought this would happen? No one expected it. Most of them don't believe it when they first hear about it either. But God did it anyway. It turns out that our intellectual belief matters not at all to how this story turns out. Whether we believe it or not, God is doing a new thing. This is a story for doubters, for those behind the curve, for those who aren’t sure, for those who wonder. This is a story for people who don’t know what to look for, but want to look anyway. This is a story for those who are ready to throw a golf ball at a target 50 yards away. Because what matters is not that we think the right things—what matters is that when God does this new thing right in front of our eyes, we take notice, and then we tell the story.

The women at the tomb put the pieces together and ran back to tell the others. The other disciples responded with scorn.

Sounds just like the two responses most of us have to seeing God’s new thing.

Sometimes we see and respond right away, rushing out to tell others, gathering in community to ask questions about what this all means, wondering together not about the answers, but about how to live in this new reality. Then we try it out--and sometimes we succeed and sometimes we fail, but we work together to figure it out and seek God and be faithful.

Sometimes we see and insist it can’t be this way, because we already know how this story goes.

But whatever we know, or think we know, God doesn’t wait for us to understand or believe or follow—God does it. Jesus is raised from the dead before anyone thinks that’s possible. This is how God has always worked—act first, call second. God brought the people out of Egypt, then showed them how to live as God’s people. Here again is the same story—God’s love broke through even a sealed tomb, and then we’re told how to live in response: come together to share the story, to remember—re-Member, put back together, to seek faithfully even without all the answers, to love one another as we have been loved.

God is doing a new thing, whether we believe or see or understand…are we willing to be amazed?