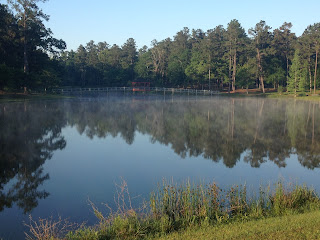 A month ago today, I was settling in to a lovely retreat center north of New Orleans. I'd grabbed beignets in the airport, (half) jokingly begged the shuttle driver to show us a drive-through daquiri place up close and personal, and been super grateful for the homemade hummus I'd tucked into my awesome hello-kitty thermos (thanks Max!) so I could turn a lettuce-and-tomato sandwich into a fantastic snack.

Throughout the week about 30 presbyterian pastors spent time learning about all kinds of things, then praying and talking about how we could put those things into practice to improve our lives and ministries. The week culminates in the creation of a plan that involves words like "goals" and "objectives."

Now, I'm not a huge fan of goals and objectives. They seem so black and white, with so much opportunity for failure or disappointment. I really do not like to disappoint people. (This may be what I spend most of my hours in therapy talking about.) Of course, what I really mean is that I don't like to disappoint other people. Disappointing myself still sucks, but falls lower down on the scale of most-hated things, somewhere around "getting shots" and "eating something gross", just above "wearing orange."

You can see where this is going, right?

Because I had been told to create this plan, and I wasn't about to disappoint anyone, myself included, by not doing it, I did.

I will note that we were told repeatedly that we could use whatever language and format was useful to us, because it was MY plan, not the faculty's plan, not the denomination's plan, not my friend's plan, not my church's plan. But it seemed like they'd put an awful lot of time into coming up with this particular format for a plan, so I thought I'd try it. I put my goals and objectives into the chart. I answered all the questions. And then, of course, I broke out the crayons and drew all over it.

I was skeptical about my ability to stick to a plan. But today, at the three-week-check-in with my small group, I found myself saying things like "well, I've done this, and I'm working on that..." and "I feel pretty good about how this is shaping up."

It turns out that Charlie was right. I can in fact work the plan. I have the skills and even the willpower to do it, if I just put it on paper and have some people to check in with about how it's going.

The latter is the hardest part for me. Because I had to tell someone else what I hoped to do, and the people I've told have been really great about checking in to ask if I'm doing it. It's like a weird combination of doing something that's good for me and doing something that won't disappoint other people. Yes, I should have all kinds of internal motivation. But who are we kidding. My motivation is just as mixed as the next person--some from within, some from the Spirit, some from abject fear that people might think I'm a slacker.

I wonder whether this kind of process could work for a whole group of people, too. Like, say, a congregation. Could we spend time learning, then praying and discerning and talking, in order to create a plan that we can work? The idea behind the plan is that it is an expression of what God calls us to...surely that's what we're asking in church too? What is God calling us to? How can we get there? And if there's a plan to which other people are holding us accountable, would we be more likely to persevere even when it's hard going?

It seems many congregation's plan has been: do what we've always done, or do what we used to do, and wait for people to find out how great that is.
This is probably obvious, but: that plan does not work. That is a plan for the church we used to be, not the church we are called to be. If I had created a plan that was all about practicing the clarinet, it would be a plan doomed to fail. Those were wonderful times in my life, but they are not the times I'm in now, nor the times I'm headed toward. A plan for how I could live in a place where leaving the house was difficult due to the harassment level on the streets would also not be a good plan--it's a plan for 2006, not a plan for 2013 and beyond.

I'm sure there are churches that are as wary of the whole goals-objectives-plan thing that I was (and maybe still am). It feels so boxed-in and clinical. But so far I am experiencing "working the plan" as a freeing option--it allows me to think about a variety of things rather than just "what do I do now?" Maybe that would happen on a communal level too?

I recognize, of course, that interruptions to the plan are inevitable. That no matter how carefully we work a plan, things happen. That's why we also need to remember this: