Early on the first day of the week, while it was still dark, Mary Magdalene came to the tomb and saw that the stone had been removed from the tomb. So she ran and went to Simon Peter and the other disciple, the one whom Jesus loved, and said to them, ‘They have taken the Lord out of the tomb, and we do not know where they have laid him.’ Then Peter and the other disciple set out and went towards the tomb. The two were running together, but the other disciple outran Peter and reached the tomb first. He bent down to look in and saw the linen wrappings lying there, but he did not go in. Then Simon Peter came, following him, and went into the tomb. He saw the linen wrappings lying there, and the cloth that had been on Jesus’ head, not lying with the linen wrappings but rolled up in a place by itself. Then the other disciple, who reached the tomb first, also went in, and he saw and believed; for as yet they did not understand the scripture, that he must rise from the dead. Then the disciples returned to their homes.
But Mary stood weeping outside the tomb. As she wept, she bent over to look into the tomb; and she saw two angels in white, sitting where the body of Jesus had been lying, one at the head and the other at the feet. They said to her, ‘Woman, why are you weeping?’ She said to them, ‘They have taken away my Lord, and I do not know where they have laid him.’ When she had said this, she turned round and saw Jesus standing there, but she did not know that it was Jesus. Jesus said to her, ‘Woman, why are you weeping? For whom are you looking?’ Supposing him to be the gardener, she said to him, ‘Sir, if you have carried him away, tell me where you have laid him, and I will take him away.’ Jesus said to her, ‘Mary!’ She turned and said to him in Hebrew, ‘Rabbouni!’ (which means Teacher). Jesus said to her, ‘Do not hold on to me, because I have not yet ascended to the Father. But go to my brothers and say to them, “I am ascending to my Father and your Father, to my God and your God.” ’ Mary Magdalene went and announced to the disciples, ‘I have seen the Lord’; and she told them that he had said these things to her.

It was still dark.

Early in the morning.

The first day of the week.

Not just before sunrise dark, but end-of-the-world grief dark.

The kind of dark that takes your eyes time to adjust to, and seeing with your heart is impossible.

In the dark, everything sounds louder, and the shadows shift and play tricks.

In the dark, you have to get right up to the tomb to be sure that hope is really gone, and you have to be practically at the door to notice that it’s open.

In the dark, nothing makes sense.

So Mary ran. She did not know what was happening, but she knew how to run, even blinded by tears and shadows.

After three years of walking all over the country, Peter and the other disciple had strong legs too. Even weakened by grief and fear and uncertainty and anger, they could run, and run they did.

In the dawn light, they looked…but they could not see. They could not understand. They looked, they even went in to look closer, but still, it was dark.

It was early in the morning, but it did not seem that day would ever come again.

It was the first day of the week, but it felt like the end of the world.

And so they ran away again, back into the valley of the shadow of death, where they knew how things worked.

We are so familiar with the story that it’s easy to forget that in the moment, even Jesus’ closest friends had no idea what was coming. They knew what they had expected, and that it had all gone horribly wrong, and that was it. They did not know what on earth God was up to.

Mary stayed to watch the sun rise. She didn’t understand either, and kept saying over and over “I do not know.” To the angels, to the gardener, to herself: “I do not know.”

These are not popular words. We live in a culture where we’re supposed to have things figured out, and if we don’t then we just say that “everything happens for a reason.” Even if that’s true, the reality is that we have no idea what that reason might be. But to admit that we do not know…somehow that feels like weakness, like failure. We’re supposed to know—especially Christians, since we are often portrayed as full of certainty and answers. But we don’t know where the plane is, we don’t know how disaster happens, or why we can’t cure cancer. We don’t know what tomorrow will bring, no matter how much we plan for it or how many glossy brochures we read. We do not know what, exactly, God is calling us to do, and we have no clue how to talk about what God is doing without resorting to platitudes. We just don’t know. The world doesn’t make much sense, and we’re often afraid to admit that we’re in the dark.

We stand, with Mary, at the threshold of life and death, and we can’t figure out which side is which or what is happening or where to go.

And then there was one word: Mary.

“I will call my sheep by name, and they will know my voice.”

And suddenly, what had begun in darkness splashed over the horizon and a new day dawned—not just any other day, but a brand new day like none other.

Mary turned toward the voice and could hardly believe it. Just as the other disciples had gone into the tomb and looked but not seen, she too looks and tries to understand, but her mind doesn’t quite stretch around this new reality. But she tries—she works and works to figure it out, just like we all do. The Greek word for “turn” is the same as “to change your mind” …and Mary’s mind is in overdrive. How does resurrection work? What words can we use to describe it? Where was it predicted, and how can we make it fit into our already-configured lives?

But Jesus—who was there when the world was created in darkness, and who rose to re-make the world long before the sun came up—refuses to allow this. “Do not hold on to me” he says. Even as Mary’s eyes are still adjusting to this new reality, Jesus can see that we are prone to turning it into an idea to think about, a concept to believe—something we can hold on to. But this is not an intellectual exercise, nor is it a return to the way things were. Lists of beliefs do not bring more light into the world, and the sun is coming up on the first day of God’s new thing, whether we understand it or not.

So Mary turns again, making the same turn we too are called to make: she runs yet again, this time in the bright light of day, and tells the others: “I have seen the Lord!”

Notice she doesn’t say “I figured it out!” or “let me explain it to you.” She simply runs to tell of her experience of sunrise at the tomb. In the darkness, God was still at work, growing love so big and so incomprehensible that it couldn’t stay behind closed doors. It still makes no sense, like most things about Jesus, but isn’t that the point? That we don't get to make the sense, God does. Back at the beginning of John’s gospel we heard that the Word, the Logos, God’s Logic, is coming into the world, and will not leave it, for he is the Good Shepherd who calls us out of darkness and into light. And in God’s Logic, death does not have the power. In God’s Logic, love is stronger than evil and light is stronger than darkness. In God’s Logic, we tell where we have seen Jesus, rather than insisting everyone must see what we see. The new creation built on resurrection doesn’t require our intellectual adherence—it asks instead for something much more: our lives, our love, our hope, our serving, our telling. 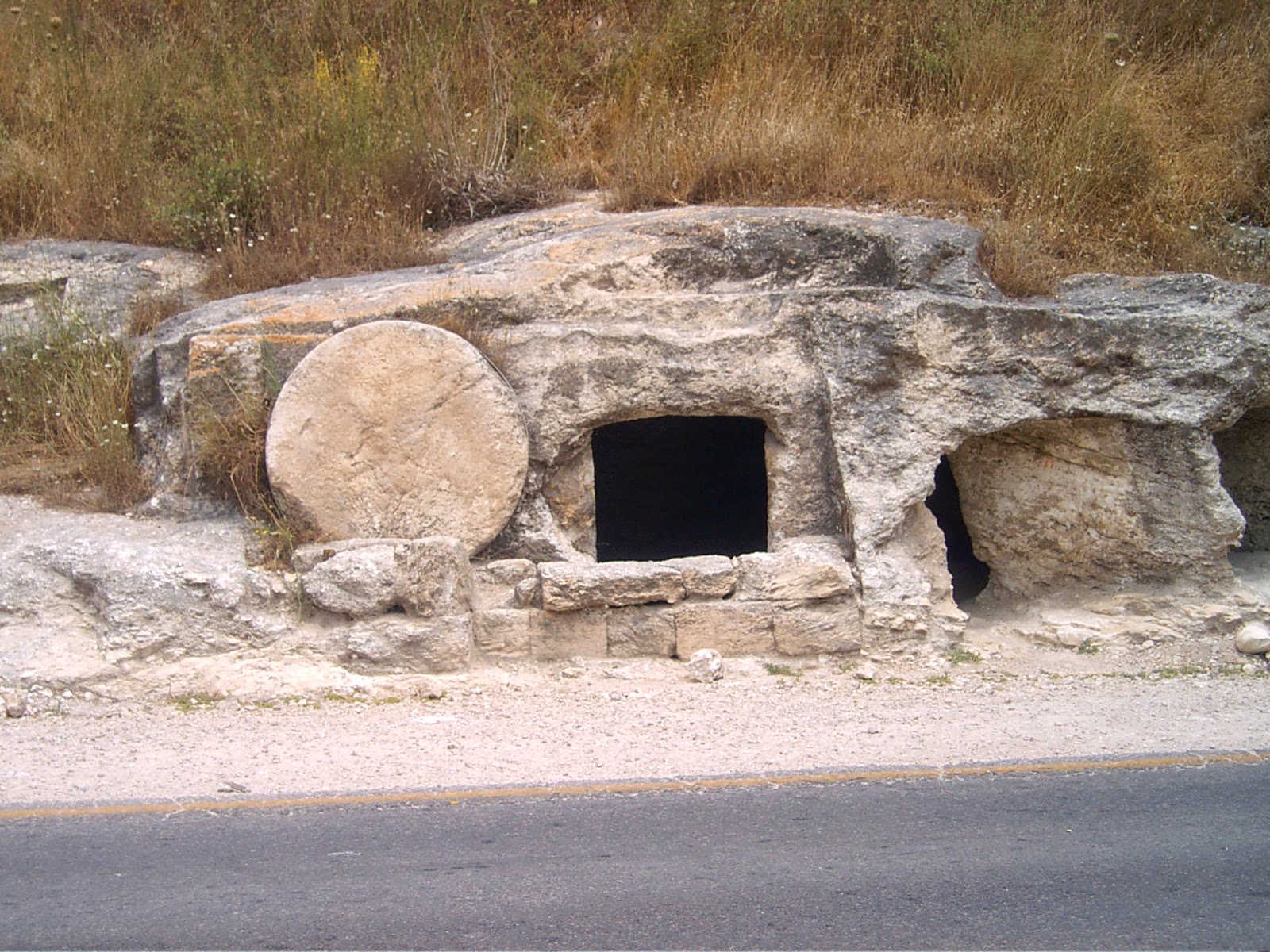 We stand at the door that leads into the unknown of a new day at the beginning of a new week in a new world. We do not know what to expect, but we know the stone has been rolled away, the bindings of death left behind, love beyond understanding walks among us, living and breathing life and hope and peace. Will we look, and see, and tell the story?