Lives worth talking about -- a sermon on Luke 13

Lives Worth Talking About

Since the story we heard last week about Jesus telling the parable of the good neighbour, and then encountering Martha, Jesus has been teaching his disciples and the crowds who follow them throughout the countryside and towns. He has taught them directly about prayer, and he has spoken in parables about many things. He told them to let their light shine, and to look carefully at the circumstances and times they are living in for evidence of God’s work. We pick up the story in the gospel according to Luke, chapter 13. I am reading from the Common English Bible.

Jesus told this parable: “A man owned a fig tree planted in his vineyard. He came looking for fruit on it and found none. He said to his gardener, ‘Look, I’ve come looking for fruit on this fig tree for the past three years, and I’ve never found any. Cut it down! Why should it continue depleting the soil’s nutrients?’ The gardener responded, ‘Lord, give it one more year, and I will dig around it and give it fertiliser. Maybe it will produce fruit next year; if not, then you can cut it down.’”

At that time, some Pharisees approached Jesus and said, “Go! Get away from here, because Herod wants to kill you.”

Jesus said to them, “Go, tell that fox, ‘Look, I’m throwing out demons and healing people today and tomorrow, and on the third day I will complete my work. However, it’s necessary for me to travel today, tomorrow, and the next day because it’s impossible for a prophet to be killed outside of Jerusalem.’

“Jerusalem, Jerusalem, you who kill the prophets and stone those who were sent to you! How often I have wanted to gather your people just as a hen gathers her chicks under her wings. But you didn’t want that. Look, your house is abandoned. I tell you, you won’t see me until the time comes when you say, Blessings on the one who comes in the Lord’s name.” 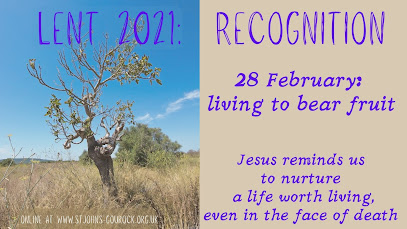 I’ve lost count of the number of times I’ve been asked “why do bad things happen to good people?” Or its cousin, “why has this bad thing happened to me?” Sometimes when we are reading the Bible we remind one another that in ancient times, before people knew about bacteria or viruses or meteorology or plate tectonics or other sciences we take for granted, people often believed that illness or calamity was a result of sin. It’s fascinating to me that we speak about that as if it’s an ancient idea that we no longer hold, and yet even now, both people of faith and people who’ve never set foot in a church can ask “am I being punished for something?” when they get a diagnosis or experience a tragedy in their family or home.

So it should not surprise us that people around Jesus wanted to bring up the Galileans — people from the same region as Jesus and his disciples — who did everything right, made their pilgrimage, were worshipping at the Temple, and yet were slaughtered by the Roman governor’s militia, literally in the middle of their worship service. What did they do wrong, that this terrible thing would happen to them? And, if it wasn’t their sinfulness, then should they be worried that Galileans are being targeted? Should Jesus and his disciples maybe stay away from Jerusalem, for safety?

Jesus is pretty clear that sinfulness has nothing to do with it. Sometimes, bad things happen. And it isn’t just Galileans — he reminds them of the Jerusalemites who happened to be walking in the wrong place at the wrong time when the tower of Siloam collapsed. They weren’t any more sinful than everyone else — as Paul would later write, “all have sinned and fall short of God’s glory.”

The statement Jesus makes is confusing, then. He says, “unless you change your hearts and lives, you will die just as they did.” At first glance it sounds like he’s saying that we can avoid tragedy by repenting. But since he just said it wasn’t sinfulness that caused those deaths, that can’t be right. And we know that we can’t avoid death forever, as it’s a natural part of life.

But we can, Jesus says, live in such a way that when we die, it’s our lives people talk about. Will we be remembered for the fruit we bore for the kingdom of God, or simply for the way we were cut down?

I think that’s why he tells this particular fig tree parable to the people who ask this question. The fig tree in the vineyard looked like it had grown to maturity. It was no longer the sapling it once was…but despite its appearance, it had yet to live up to its purpose. Yet the gardener believed in the tree and its potential — he just needed time and intentional effort to change its story.

I think that’s what Jesus is getting at when he calls us to change our hearts and lives — to put intentional effort in.

That means we need to dig down around the roots, even though sometimes that’s hard work and exposes things we would rather not see. What is around our roots, tangling us up and choking off our connection to our Source?

It means we need to nourish ourselves with the things we need to grow in grace, even if it’s not what we would really prefer. Remember that fertiliser really meant manure and compost! It’s smelly and unpleasant, but it’s also the best thing to nurture the tree. What would feed our lives and help us become the people God created us to be in this world?

It means we need to prune some branches, even if it hurts. Unpruned trees waste energy that could be used for bearing fruit, instead just growing long branches with leaves that don’t produce anything. What branches in our lives or communities need pruning so that our energy can go into doing what we’re made to do, and what Jesus is looking for us to do?

The time and effort put into bringing the tree not just to look good but to do good is, I think, what Jesus is talking about when he calls us to change our hearts and lives…so that the fruit we bear is worth talking about.

Hearing this, some Pharisees come and offer Jesus a second warning — as if the story about the Galileans being killed by Pilate wasn’t enough, they want him to know that Herod is out to get him too. But Jesus is too busy going about God’s kingdom business to make time for Herod’s nonsense, and his mission to bring life in all its fullness will not be deterred by the death-dealing powers of his day.

Though the political and religious leaders hold people fast, he continues to try to gather them like a mother hen. They may not recognise him yet, while they are still in thrall to the powers around them, to the status quo and their desire to get ahead and focus on themselves and their own happiness, but the day is coming when they will recognise that the house they have built themselves is empty, while Jesus offers abundant life.

I have to confess to you that at this point, I have about five examples of our current social, political, economic, and cultural life I want to give to make an explicit connection between this biblical text and our contemporary moment. But I also don’t want to constrain your thinking — part of digging around the roots and fertilising our lives is loosening the soil enough to see the connections the Spirit is presenting to us, so that we can bear better fruit in the midst of those situations we find ourselves in every day. So I invite you to think about the world in which we live, and the systems at play in our lives — from what we value as a nation or a community, to how we express those values in our economy and politics, to the choices we make in caring for our neighbours both locally and globally. Where do you recognise Jesus gathering us like a mother hen, and where do you see us resisting his call and choosing our own ways, or the way it's always been, instead?

And then what digging and fertilising and pruning needs to be done, in order to see Jesus more clearly and bear fruit for his kingdom — in our own lives, in the church, in our community, in our nation, in the world? How can we live in such a way that it’s our lives that are memorable, no matter how they end?

May we recognise the things that make for abundant life, and act on them. Amen.