Last night we went to the citadel (fortified by Saladin to fend off the Crusaders, but never actually needed because they were fended off in Palestine). It's huge and amazing and well preserved. It is also where the Sufi Dancers (Whirling Dervishes) "perform" their prayers three nights a week, for an audience. It was AMAZING. The music was awesome, the dancers were great, and the whirling dervishes could whirl forever. The first one (who came on about 40 minutes into the evening) whirled solo (with some surrounding dancers/drummers) for 30 minutes without even thinking about stopping in spite of coughing. After he was done there was a musical interlude, then three dervishes came out and whirled together for about half an hour. It was very cool.
Sufism is the mystical branch of Islam, kind of like the mystics of medieval Catholicism. The Whirling Dervishes are, I think, a sect within Sufism and they use whirling as a way to work themselves into a trance and thus a deeper meditation, which brings them closer to God. It felt kind of weird to watch this as a performance, and then to applaud at the end, but it was amazing and beautiful, so I did. And I did so with only a small amount of shame at being a witness to something like this. Here are some pics, and there are more in my yahoo photos (link on the left sidebar). 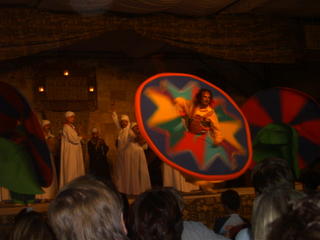 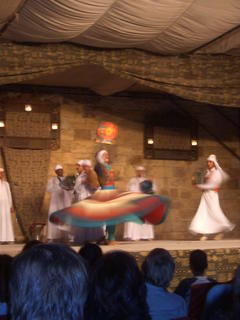 In other news, I hope you are all thinking about ways to help Katrina victims. It is such a huge disaster that it's all over the news here too, and I've been reading the NY Times coverage. I am appalled at the way the situation has been handled, and especially with the news (news to me, anyway) that funding for the levee system to be finished was pulled in order to fund the war in Iraq. UGH!

Also in other news, I heard that a few hours ago Chief Justice Rehnquist died. This makes me sad on so many levels, from his family's grieving to the pain he was in and the lengths he went to to try to heal, to the fact that there are now two vacancies on the Supreme Court and an imbecile president in charge of filling them. I hope this goes better than I think it will.

Now I am hungry, and Jason just walked in with a sandwich that made me extremely jealous. I'm going to eat now. And to try to stay clean. ha!
Posted by Teri at 10:39 AM