Boundaries -- a sermon on Genesis 1

When God began to create heaven and earth, and the earth then was welter and waste and darkness over the deep and God’s breath hovering over the waters, God said, “Let there be light.” And there was light. And God saw the light, that it was good, and God divided the light from the darkness. And God called the light Day, and the darkness he called Night.

And it was evening and it was morning, first day.

And God said, “Let there be a vault in the midst of the waters, and let it divide water from water.” And God made the vault and it divided the water beneath the vault from the water above the vault, and so it was. And God called the vault Heavens,

and it was evening and it was morning, second day.

And it was evening and it was morning, third day.

And it was evening and it was morning, fourth day.

And God said, “Let the waters swarm with the swarm of living creatures and let fowl fly over the earth across the vault of the heavens.” And God created the great sea monsters and every living creature that crawls, which the water had swarmed forth of each kind, and the winged fowl of each kind, and God saw that it was good. And God blessed them, saying, “Be fruitful and multiply and fill the water in the seas and let the fowl multiply in the earth.”

And it was evening and it was morning, fifth day.

And God created the human in his image,

in the image of God he created him,

male and female he created them.

And God blessed them, and God said to them, “Be fruitful and multiply and fill the earth and conquer it, and hold sway over the fish of the sea and the fowl of the heavens and every beast that crawls upon the earth.” And God said, “Look, I have given you every seed-bearing plant on the face of all the earth and every tree that has fruit-bearing seed, yours they will be for food. And to all the beasts of the earth and to all the fowl of the heavens and to all that crawls on the earth, which has the breath of life within it, the green plants for food.” And so it was. And God saw all that he had done, and, look, it was very good.

And it was evening and it was morning, the sixth day.

This is the tale of the heavens and the earth when they were created. 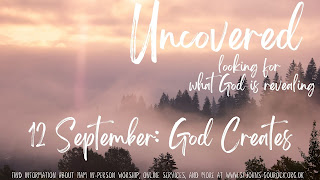 We are so used to the opening line of the Bible being “in the beginning”…but I have to admit I really love this new translation that Hebrew scholar Robert Alter worked on over the past decade. “When God began to create” — it’s a reminder that God’s creativity is not confined to this one story, but goes on throughout history even to today.

I also love the sense that there’s no beginning separate from God’s activity. It’s God’s creative energy that is, itself, the beginning. So it isn’t as if we could point to a calendar and say “this is the beginning” like we can with the school term or the new year, but rather that in the midst of chaos, God started something…and that was the beginning. When God began to create, everything was chaos and darkness, and God started something new by pulling that chaos and darkness back, revealing light and airspace and earth, which were full of potential. Particularly this year, I just find that the idea of God uncovering the potential of the earth from underneath the chaos — the welter and waste — to be really provocative and interesting.

There’s certainly plenty of welter and waste to go around, and I don’t know if it’s because of social media or having spent so much time home alone or what, but somehow the world feels more chaotic than ever, as we try to figure out what “new normal” looks like. There’s still a pandemic raging around the earth, of course. The climate change situation is dire and the consequences become more visible and more tragic with each passing day. We still live with the fallout of war-making decisions made decades ago. All of these things mean people are moving around the globe in huge numbers, seeking peace and safety, seeking clean water or refuge from drought, seeking higher ground, seeking healthcare. And many who aren’t yet desperate for those things are unwilling to accommodate those who are, so conflict intensifies.

I think there’s something instructive, then, about how God goes about creating order from chaos. Because it turns out that God could see the abundant life of creation already, in the midst of all that welter and waste…it just needed uncovering. It needed space to flourish and grow into its potential…potential that only God could see. The breath of God hovered over the dark depths — hovered like a mother bird hovers over the nest, caring for eggs and then chicks, going back and forth, one eye always on what’s happening in the nest and one eye on what else is moving in the background. And the breath of God hovered…and then God drew in that breath and sent it out in a word that literally moved heaven and earth.

The light shone, and the waters were pulled back, and earth and air and sea had space to breathe too. Another word and they were commanded to bring forth life — and the earth and sky and sea were obedient to God’s voice asking them to join in the creation. Notice it doesn’t say in this story that God created plants, it says that God told the earth to put forth grass and plants and trees. The potential was there, and God called it out of the ground. And into that environment, which God saw could continue being endlessly sustainable in re-creating itself, God called forth animals and birds and humanity. God saw what was possible, and made enough space in the chaos and darkness that possibility could become reality. God uncovered life where it looked like there was only welter and waste.

And then God asked humankind to continue the work. The word sometimes translated as “have dominion” or what Robert Alter translates as “hold sway” is a royal word, about being the royal representative…humanity is meant to be God’s image, God’s representative, amidst the creation, to take the kind of responsibility for it that God has done. And what has God done? Made space in the midst of chaos for flourishing life, uncovered potential and allowed it to do what it does best, set in motion a system that continues to create and re-create. God both creates things and enables creativity by setting boundaries — boundaries for water and sky and chaos and time — and by calling out the goodness buried beneath the depths.

How do we do that, as the people made in God’s image? How are we making space for creation to flourish, allowing it to continue its God-given creative work, and uncovering goodness?

If we’re honest, the answer is that we don’t. Instead we fill up the space with our stuff, snuffing out the creativity of the earth and sea and sky with our rubbish. We disrupt the cycles of creation so that it will serve our greed, even though it depletes the earth. We take what it produces and keep it for ourselves, believing we are somehow outside the system rather than a part of it. Rather than acting like God’s representatives in the midst of creation, we have acted like the idols we believe ourselves to be, agents of chaos rather than creativity. Rather than uncovering the goodness at the heart of God’s creation, we have laid waste to it.

But planted more deeply than all that is wrong, God’s word of goodness is still true. God can still see the potential and possibility in the midst of the welter and waste. It’s still there, and the creation is still partnering with god in creativity and flourishing. When God began creating, God didn’t then quit. But where previously it was the dark depths and the waters that needed boundaries set in order to reveal the fertile ground, now it is human greed and idolatry that needs boundaries. If we are restrained, as the seas were, as the darkness was, then there will be space for new life. God is, even now, calling forth and empowering the creative capacity of all things…and that includes us. It will take all our creative capacity as human beings if we are to find ways to restrain ourselves in order that all life might thrive.

We could begin by taking the seventh day seriously. It’s a built in time when God allows creation to do its thing without interference, as God rests…and if we were to take time out from shaping and re-shaping and micromanaging and using and abusing the environment around us, we may find that our relationship to the creation is re-set to be more like the image of God…but at this point, we can’t stop there. That is just one small boundary restraining our insatiable desire for more and the truth is that because we ignored it for so long, now we need much deeper cuts if we are to be good stewards of this gift for future generations.

In about half an hour our boys brigade will be doing a litter clean up, and that’s a good start. Of course if we restrained ourselves from littering in the first place that would be better. Restraining our use of private transport, and fossil fuels, and single use plastic, and intensive agriculture, especially animal agriculture, is also all crucial. But we are beyond the point of individual actions being enough. We need them, don’t get me wrong. We must act as individuals. But we need the whole human family, all of us who are made in God’s image and called to act in God’s likeness, to come together to set some boundaries on the relationship we have with the rest of creation. We cannot abuse it and expect it to continue to nourish us, any more than we can expect that in any other relationship. We cannot simply overrun it and expect it to live up to its potential. And we cannot uncover the good news God planted within creation if we are constantly burying it under mountains of landfill. In other words, we cannot be agents of chaos and expect creation to treat us like agents of grace.

We need to restrain ourselves, individually and corporately and politically, and we need to do it now. To live into the image of God is to create space for life to flourish, and to nurture that potential and possibility together, letting the world do what God made it to do: thrive.