What God Learned -- a sermon on the binding of Isaac

After the creation story we heard last week, the story moves quickly along through the drama of the first sibling rivalry, between Cain and Abel, to the earth’s population booming and trying to come together to become like gods and build a tower to heaven, to the flood and Noah’s family and the animals floating in the ark, to the reality that violence can never stop violence, and so God commits to another path and offers the rainbow as a sign of that promise. And then we meet Abram, whom God calls to leave his family and familiar surroundings and go out into a new-to-him land. Abraham and Sarah pack up and go, trusting God to guide them and to provide what they most want: children. It’s a long journey through foreign lands, different tribes and towns and difficulties and adventures, but through it all two things are constant: God promises to make their descendants more numerous than the stars, and also Abraham and Sarah have no children. Today we hear about that promise finally being fulfilled, when Sarah and Abraham were in their 90s!

A couple of years after their son Isaac is born, however, jealousy flared between Sarah and the slavegirl Hagar, who had previously borne a son to Abraham, named Ishmael. Sarah and Abraham sent Hagar and Ishmael away, throwing them out of the house to fend for themselves in the desert. When their food and water ran out, Hagar left Ishmael alone and travelled on until she couldn’t see or hear him, so she would not have to see him die. Both of them cried out, and God heard them and opened Hagar’s eyes to see a well, providing just what they needed to go on, so that Ishmael too would carry his part of God’s promise to his father Abraham, to be a great nation.

I am reading today from Robert Alter’s translation as we hear the first few verses of Genesis chapter 21, and then continue in chapter 22.

The Lord singled out Sarah as he had said, and the Lord did for Sarah as he had spoken. And Sarah conceived and bore a son to Abraham in his old age at the set time that God had spoken to him. And Abraham called the name of his son who was born to him, whom Sarah bore him, Isaac. 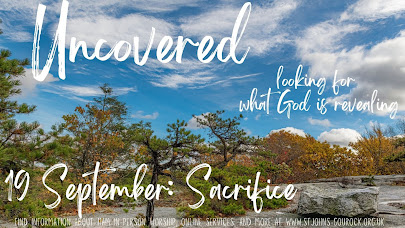 This is a pretty terrible story.

Abraham had just sent Ishmael and Hagar away, casting them out into the desert with only a couple days of supplies, and hoping that he could indeed trust God to provide for them — sacrificing one son to his wife’s jealousy. And now he’s being asked to sacrifice the other, this time with his own knife. And again he says nothing, just does it.

This is a man who argued with God, negotiating to ensure that no innocents were collateral damage at the destruction of Sodom and Gomorrah. Abraham convinced God to spare the entire city if only ten people could be found doing the right thing, and when they couldn’t, God rescued the one faithful family first. Abraham laughed in God’s face at the idea he would become a father in his old age, and he talked with God about other options for his inheritance. And yet when finally the promise comes true, the one child who would carry on his name and the covenant to be a blessing to the world, Abraham was willing to let it all go without a single question. God did ask politely, saying please — which is unusual! — but still.

Though it does say he was up very early in the morning…perhaps he was having trouble sleeping. I know I would. I would be lying in my bed thinking about that phrase “Here I am”…the Hebrew word is “hineni” and it’s not just like “I’m over here” but like “I’m all in, fully committed” — it’s the word Abraham used when he heard the voice call his name. Before he actually knew what God was going to ask, he had proclaimed his commitment. I would be lying there wishing I’d used another word…and then wondering if I’m allowed to regret answering God’s call?

But we don’t know why Abraham was up so early. We don’t hear anything of his thought process or his feelings or his interior life. Since he doesn’t reply to God at all, doesn’t engage in his usual back-and-forth as he has in every previous conversation, we’re left to wonder what on earth was going on in his head. Or maybe whether he was so caught up in his own thoughts that he just went on auto-pilot.

When Isaac was finally able to break in to his father’s silent thoughts, Abraham again answered with “hineni” — he was all in, fully committed to his son, at least while they walked together. The whole story is full of notes about how they traveled as one, united in purpose — or so Isaac thought, anyway.

At the top of the mountain, it feels to me like those movie scenes where everything goes into a weird sort of slow-motion, with the edges of the screen blurred, almost like a dream sequence. Basically without looking, Abraham builds an altar, and he stacks up the wood, and he ties up Isaac, and lifts him onto this pyre, and he reaches for the cleaver…it’s all like moving through molasses, like the air is thick, and Abraham is going through the motions without really seeing anything, just moving his hands until it's all in order. Then again, the voice calls—twice, this time, urgent, desperate to get his attention, to break through the thrall he’s caught in. And Abraham again says “hineni” — he’s all in, whatever the voice is going to ask. And finally he looks up, almost like that moment when you shake your head and see what you were doing like for the first time, and there’s a sheep standing right there. Just as God promised to provide of Ishmael in the desert and God did, though Abraham didn’t know it…just as Abraham had told Isaac that God would see to the sheep, God did, though Abraham very nearly didn’t know it, because he wasn’t looking.

The next words God says are, I think, the most disturbing in the story. God says “now I know…” — implying that God really didn’t know what Abraham would do. The story is set up as a test — not necessarily a pass-fail final exam, but a progress test that reveals how much we’ve learned and where we still need to do a bit more work. We can talk another time about the idea of God setting a test, but what I want to wonder today is just what this test revealed that God didn't already know. What did God uncover in Abraham that maybe neither of them actually knew he had in him?

Abraham was willing to sacrifice the person most precious to him — his only legitimate son, and also all that he represented, the fulfilment of the promise that God made to him all those years ago. Remember by this point Sarah would be well into her 90s and Abraham past 100 years old. This one child is the one who will carry the covenant, because God promised that through him Abraham would become the father of many nations, with more descendants than the grains of sand or stars in the sky. And beyond even all those decades of waiting and longing for him, Abraham loved him, it says.

And he was willing to put a knife to his throat, if he thought that God was asking for that.

Here’s what I think God learned that day:

I suspect that if any of us heard a calling to sacrifice a member of our family for God, we’d at least pray about it again first before deciding to reject the voice that did not align with the call to love God and love our neighbour as ourselves.

But would we do the same when asked to sacrifice someone who isn’t close to us?

What about if we don’t have to personally hold the knife…but simply put an x on a ballot paper for a person or party who believe in turning refugee boats away and sending them back to sea? Or simply to demand cheap clothes and food, even knowing that people must work for pennies in order to provide that for us? Or simply to insist on the convenience of our own private cars while the sea rises and swallows people’s homes and livelihoods? What about if all we have to do is continue to believe our economy and power and standard of living must grow indefinitely because that’s what politicians say…while in other parts of the world water sources are drying up and healthcare is a distant dream and the fires and floods and famines get worse every year? What if all we have to do is look away from the person we’re walking past on the street, or turn off the television…sacrificing our literal neighbours to poverty or drugs or mental illness for our comfort or worse, our self-righteous judgment. Or what if all we need to do is hold to one narrow understanding of God’s love, leaving everyone different than us outside it?

How easily we sacrifice each other.

This test reveals where Abraham still has work to do…and where we still have work to do. The truth is that we can only transform what we can name — so even though it is painful and awful, bringing this story out into the open means that now we are capable of doing that work. We are capable of seeing our choices and their impact on others, and making a different choice. We are capable of seeing the pain we cause, and changing direction to be healers instead. We are capable of keeping our eyes and hearts open, of saying “hineni” and being all in and fully committed to not only those most precious to us, but those precious to God. In fact, more than being capable of this, it is our HOLY CALLING to do this. God uncovered our tendency to sacrifice each other so that we could stop doing it and learn a different way. If only we will open our eyes and look and see what God has provided — abundant life for all. On the mount of the Lord, there is vision.