So now I'm in the food court in the main jetBlue terminal. JFK is not my fave airport--it's old looking, could use paint and cleaning and general sprucing along with some adjustments to layout and internal traffic pattern. However, this food court, labeled "international food hall" has cheeseburgers (eew), pizza, a deli with Boar's head meat (eew) and cheese (yum!), mexican, asian, american comfort food, salad, and "papaya king"--an unknown entity. That's a pretty good selection for a girl who will be sitting here for a while. And props to jetBlue for the free wireless! a little slow, but free!

People here do not seem to be in any kind of hurry. There's a different feel than at O'Hare, where people rush around, talking on cell phones, making irritated faces at the people in front of them in the spacious terminals, and queuing anxiously at the gate many minutes before their section is called. At O'Hare, people give the impression of being important and having serious "places to go and things to do! Now!" Here it's much more relaxed. Very few cell phones. No rushing. Not a lot of rollerboard bags. I can see several gates from my seat and there are no anxious queues. There's also less overhead-announcement things going on, which is great since I'm sitting basically right under a loudspeaker. They're playing ABBA right now, but not too loudly. I love ABBA. :-)

This morning at the Richmond airport I actually thought I might have something to blog about, but I didn't have time. Now I can't remember it.

On this vacation I did not do a good job of not working. I checked my church email a couple of times a day. I sent agenda items for the session meeting. I thought about church stuff. I made notes about potential new ideas/programs/ministries/studies and re-vamps of existing stuff. I spent some minutes in anxiety about my confirmation class. I called in a couple of times-- 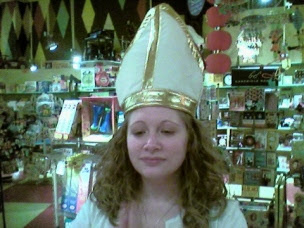 but in my defense, one of those times was RE a pope hat I saw at a toy store! It was fantastic. Looked excellent on me. I had visions of all the ways I could use it in youth and children's programming, not to mention the sheer coolness of wearing it in my office. But my rational brain kicked in long enough for me to call the church office to find out if they thought people in our heavily ex-catholic upper-midwestern community might be offended.

I did not buy the pope hat. I was informed that it was not a good plan. but I'm a little sad.

let's see...nothing new to report from the food court. So I guess that's over-and-out for me, for now.

I hope I get home tonight. I miss my kitties.

update: Papaya King is smoothies and hot dogs. The cheeseburger place also has milkshakes. I had Mexican. There's something so tasty about a cheese quesadilla with refried beans on top--I don't know why, but it's better than a burrito. The melty cheese, I guess.
Posted by Teri at 5:31 PM